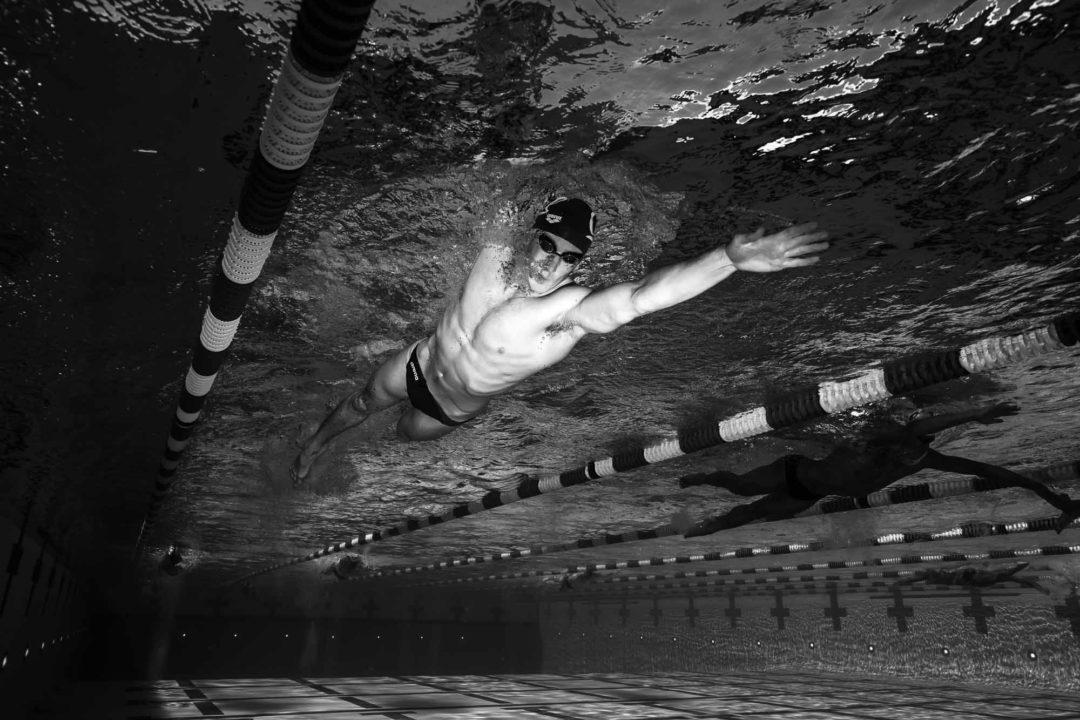 The 200 medley relay will be one of the most exciting races of men’s NCAA’s.  You can make a compelling case for a half-dozen teams in this event, with another half-dozen capable of knocking an unsuspecting favorite out of the A-final on Friday morning.

Starting things off, there’s the top seed Alabama Crimson Tide, who put up a blistering 1:22.19 at at SEC’s, the fastest pre-NCAA time in history.  All four swimmers were exceptional, but backstroker Zane Waddell is the real difference-maker.  At 20.22, Waddell is a full half-second faster than anyone else in the field, giving his teammates some much-sought-after clean water.  If Alabama can get an extra two or three tenths from butterflier Knox Auerbach, before handing off to 50 freestyle SEC champion Robert Howard, we could see the Crimson Tide return to the top of the podium.  The question, of course, is if they can exceed that performance, or if the team really geared up for conferences.

ACC champion NC State has a similarly-constructed relay as Alabama, with elite backstroke and freestyle legs book-ending their quartet.  Coleman Stewart is the top seed and defending NCAA champion in the 100 backstroke, while Justin Ress is one of the best 50-100-200 freestyle combo swimmers in recent memory.  Doesn’t hurt when your other two legs are 23-low breaststroker Daniel Graber and sub-20 butterflier Nyls Korstanje.

Then, of course, there’s Cal, which has perhaps the most balanced relay in the field, and has a long history under Dave Durden of peaking at the right time.  Based on the splits from their Pac-12 victory, the Bears have plenty of room for improvement from their seed time; backstroker Daniel Carr and anchor leg Ryan Hoffer were both several tenths slower at Pac-12’s earlier this month than last year’s NCAA’s.   The x-factor, though, is highly-touted freshman breaststroker Reece Whitley.  While he’s still excellent in a 50 yard race, Whitley is a better 100 and 200 swimmer at this point in his career.  Getting a 23-low split is critical for Cal to win.

Defending champion USC is a bit of a sleeper.  After a very, very underwhelming Pac-12’s, the Trojans are flying under the radar, but have all the pieces to repeat in this event.  Patrick Mulcare doesn’t quite have the same speed of Robert Glinta (who swam the opening leg for USC a year ago), but he’s capable of a leadoff leg in range of the other top teams, and will be handing off to Carsten Vissering, who possesses the most pure speed of any breaststroker in the NCAA.  The combo of Kyle Grissom and Nikola Miljenic makes for an excellent back-half to the relay, as well.

Keep an eye on Big Ten rivals Indiana and Michigan, as well.  The Hoosiers have a higher ceiling than the Wolverines, considering they ran away with the 400 medley relay at NCAA’s last year, and effectively return their full quartet as last season (Zach Apple does a great Blake Pieroni impersonation).  Ian Finnerty and Vini Lanza give Indiana a dynamic middle combo, but each of the squad’s four swimmers are probably better individually over 100 yards than 50.  We’ll need to see another level of pure speed from IU if they’re going to win this race.

Michigan was the Big Ten champion, clocking an unexpected 1:22.76 with an incredible final 100 from Miles Smachlo (19.92 butterfly with a slow reaction time) and Luiz Gustavo Borges (18.40 anchor leg).  It’s unclear how much more the Wolverines have left to drop this week, but if they’re going to contend, the Wolverines need another great swim from freshman breaststroker William Chan (23.11 split at Big Ten’s).

There’s several other teams worth a brief mention:

Underappreciated item to pay attention to in a race like this: staying out of the chop is crucial.  Whereas conference championship fields are more spread out, we could realistically have five or six teams within a second of each other.  That means waves, waves, and more waves, particularly over the final 100 yards.  This may come back to bite us, but we feel smart money is on the teams who will likely be out front early.

This is a great analysis. I’m predicting Bama touches the wall first in 1:21.85 in one of the closest finishes ever, with both NC State and Cal swimming in the high 1:21s also. This is Zane’s first year swimming backstroke on this relay, and it’s conceivable that he goes even faster at NCAAs, besting Ryan Murphy’s all time fastest split of 20.20. Last year in the 100 backstroke Zane dropped 0.48 seconds at NCAAs from his 208 SEC swim. Look for Bama to almost certainly have clean water after the backstroke. Also, while Robert’s 2019 SEC split is already fast at 18.30, he anchored this relay at both SECs and NCAAs last year, dropping 0.34 seconds at NCAAs. Another commentator,… Read more »

RTR “Finally, Swim Swam earlier referenced Coach Pursley stating that swimming fast at NCAAs will be be given more emphasis than doing so at SECs this year.” Curious comment. Why would a coach emphasize anything else unless the swimmers didn’t get their cuts prior???

Michigan not even in 8th place at least???

no matter what, John Shebat is gonna show out on this relay. Sub-20 if fly, sub-20.65 if backstroke. Robert Howard also gonna drop a sub 18 50 free on this relay or the 2free

Alabama is taking this one. Waddell with the fastest first 50 will give them clean water the whole way

I like Florida’s chances to improve in this relay. I don’t think Stokowski or Rooney showed everything at SECs. If Guarente or Hillis and Davis can just hold their times, they should be under 1:23 and easily into finals.

Dark Horse – Minnesota if they can get their lead off to go 21.5 or faster they’ll contend for Top 8 w/ the 3 other legs being ELITE!

But that first leg isn’t there?!?

Lead off with Donker instead of Thomas then maaaaybe