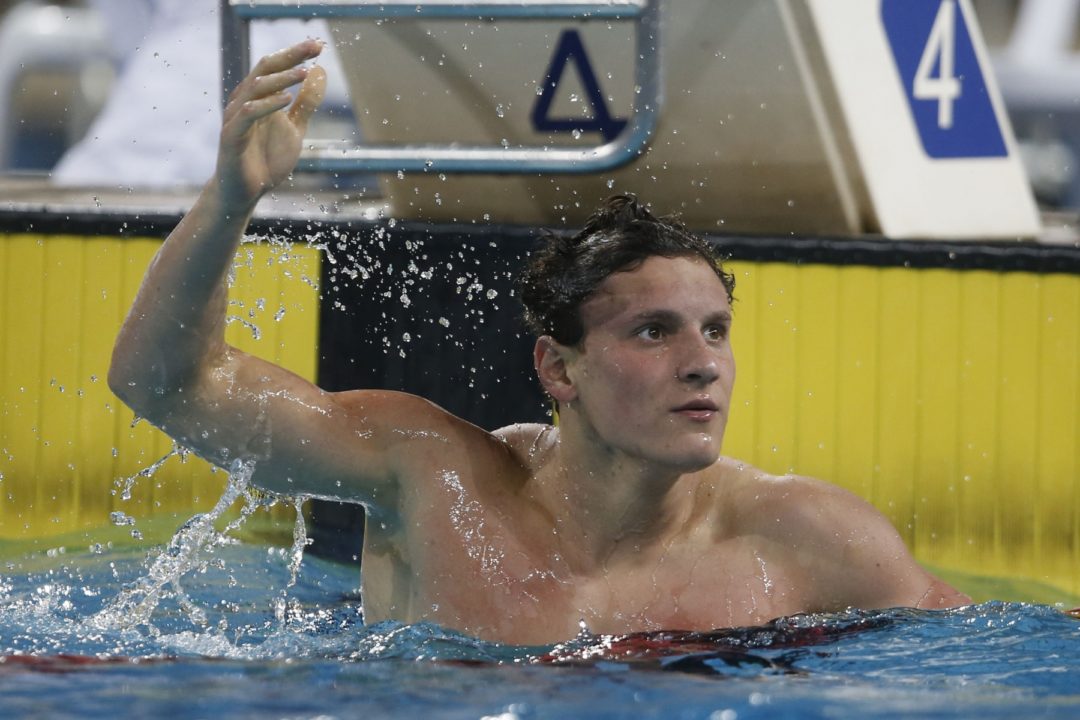 Caio Pumputis had a huge swim in the men's 200 IM, dropping three seconds and taking the win. Archive photo via Satiro Sodré/SSPress/CBDA

Italian Ilaria Cusinato of Minas took this one in 2:13.96, over a second ahead of the Argetine Florencia Perotti of Pinheiros, who was 2:15.07. The top Brazilian was Unisanta’s Gabrielle Roncatto in 2:15.96. All three women were under the FINA ‘B’ cut, while Cusinato was within a second of the ‘A’ cut, which was 2:13.03.

Cusinato won the 2019 Italian National title in that race with her season-best 2:11.89 just a few weeks ago.

Caio Pumputis has had a great meet so far, and his success continued tonight with his win in this race. Pumputis led a Pinheiros 1-2-3 here, posting a time of 1:57.70 to win by a considerable margin over teammates Leonardo Santos (1:59.56) and Gabriel Ogawa (1:59.92).

Pumputis came into this meet with a best of 2:00.97 from the 2017 World Junior Championships, meaning he’s taken over three seconds off of that time today. He moves to #9 in the world this year.

The top three went under the FINA ‘A’ cut, and Pumputis becomes the third-best performer in Brazilian history. Only Thiago Pereira (1:55.55) and Henrique Rodrigues (1:57.06) have been better.

This morning, American Mallory Comerford went a lifetime best 26.50 to lead the way in prelims and tie Natalie Coughlin for the 16th spot on the U.S. all-time top performers list. She slipped down to 5th tonight, though, gaining a bit of time to clock a 26.73.

The winner tonight was Daiene Dias of CR Flamengo at 26.31. Tying for second were Giovanna Diamante and Luanna De Oliveira, both of Pinheiros, at 26.65, while Daynara Paula of Sesi was 26.71 for 4th, just ahead of Comerford. All five were well under the ‘A’ cut.

Nicholas Santos may be 39 years old, but he’s still one of the deadliest sprint butterfliers in the world, and he showed that tonight. The Unisanta swimmer blasted a 22.77 to take the race, well ahead of Pinheiros’ Gabriel Santos (23.43) and Minas’ Vini Lanza (23.51). All three were quicker than the ‘A’ cut.

Santos now ranks 2nd in the world in this event.

Etiene Medeiros (Sesi) ripped a meet record of 27.36 to win this race by a landslide. It’s a great swim, and not far off of her 27.14 South American record. This performance comes after Medeiros stated that she’s actually focusing down to the 50 and 100 free for the 2020 Tokyo Olympics, and not training as much backstroke.

That training plan is proving to be just as helpful for her backstroke, and she shoots to the #1 spot in the world this season.

Argentine Andrea Berrino of Unisanta was 2nd (28.59) followed by Corinthians’ Erika Goncalves (28.77). Only Medeiros beat the ‘A’ cut in this race.

After Gabriel Fantoni of Minas was the only swimmer under 25 this morning (24.90), he was upset tonight and fell to third.

Guilherme Guido and Guilherme Basseto both dropped under 25 tonight. The Pinheiros swimmers went 24.94 and 24.99, respectively, with Fantoni third at 25.12. All three were under the ‘A’ cut.

Fantoni has the top time of the day, still, and he ranks 6th in the world with that time. Guido moves to 8th and Basseto will sit 12th.

Argentine Delfina Pignatiello, who just turned 19 yesterday, took this one with a time of 4:09.22. The Pinheiros swimmer was well under the FINA ‘A’ cut and won this race by four seconds over 2nd place Viviane Jungblut of GNU (4:13.28). Pignatiello moves to 25th in the world, the only South American to rank in this event.

Minas was winning by nearly 200 points yesterday, but Pinheiros has reeled them in hard and now sits just 25 points back with one day left in the competition.

Love seeing fantastic 200 IM times from so many swimmers! Becoming such a deep event.

The 50 back rankings look to be incomplete. I’m not sure why, but Zane Waddell is missing from the list. He recently swam a 24.78 at South African Nationals. Any reason why that swim may not have been added to the rankings?