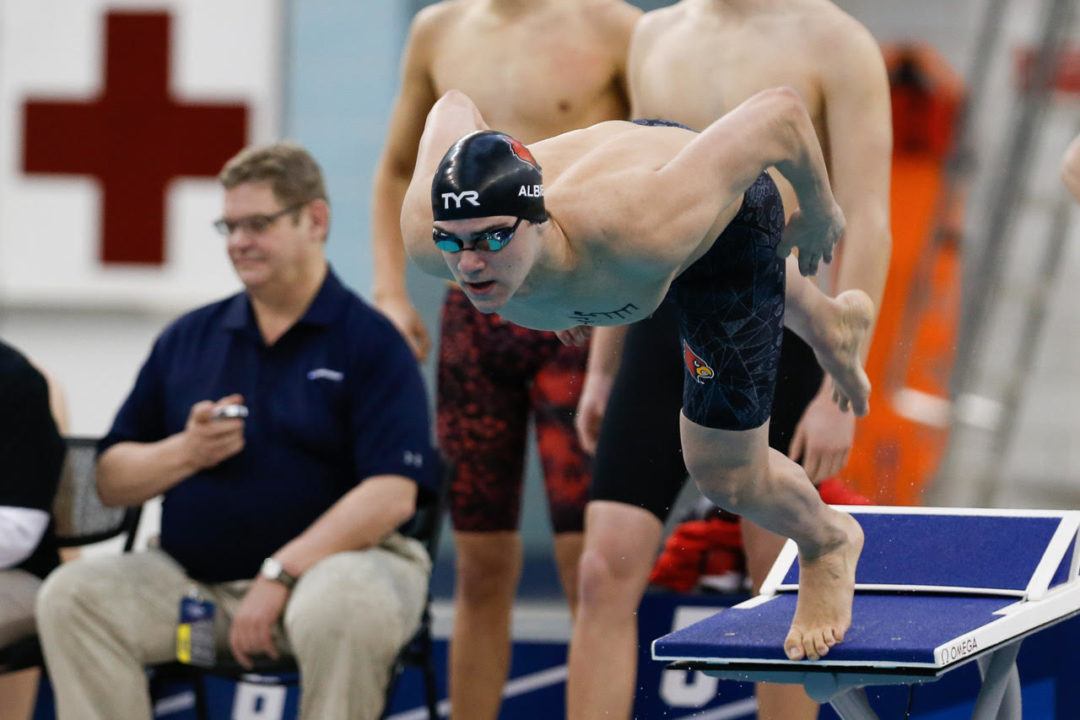 The Louisville Cardinals are one of three teams with nine A-finalists tonight at the ACC Men's Swimming & Diving Championships. Current photo via Tim Binning/TheSwimPictures.com

This morning, NC State junior Coleman Stewart took the top seed in both the 100 fly and the 100 back. As we said this morning, the Wolfpack swimmers have been putting up strong times, even if it was a bit surprising that victory eluded them in both the 50 free and the 200 free relay last night. Stewart is a perfect example of that — Stewart’s 44.44 this morning, his second swim of the session, moves him to #4 all-time, behind only Ryan Murphy, Nick Thoman, and John Shebat.

NC State put 9 men into A-finals tonight, and Louisville and Virginia did the same. The Cardinals grabbed the top seed in two events, with freshman Bartosz Piszczorowicz going 1:33.49 in the 200 free and defending champion Evgenii Somov putting up a 52.26 in the 100 breast. That’s now the 3rd-fastest time this season, behind only Indiana and NC State.

Virginia’s Brendan Casey will be swimming in lane 4 in the A-final of the 400 IM after going 3:41.42 this morning. Louisville and Virginia will separate themselves from Florida State and Virginia Tech tonight, and it should be an exciting battle for 2nd between the Cardinals and the Cavaliers for the rest of the meet.

Louisville’s Nick Albiero punched his NCAA ticket by taking 4th in 45.37, just behind Henlsey. Keblish settled for 5th with a 45.51; that shaves 0.02s off the UVA school record, which he tied this morning. That record had belonged to Keblish’s teammate Zach Fong, who was right behind him tonight at 45.70, followed by NC State’s James Bretchser (45.88) and Pitt’s Blaise Vera (46.29).

NC State’s Nyls Korstanje took the B-final in 45.62, which should help solidify his NCAA invite, although his 19.29 in the 50 free may be enough to get him, regardless.

Virginia teammates Brendan Casey and Ted Schubert led the pack through the first half of this race. Things began to change on the breaststroke leg, where Casey increased his lead to up to 2.6 seconds at the 250 mark, and Schubert began to fall off the pace. Several different men moved up over the final 150, including another Cavalier, Casey Storch, but ultimately it was NC State’s Eric Knowles and Pitt’s Samy Helmbacher who emerged and took 2nd and 3rd in close order, 3:42.09 to 3:42.30.

The top six men were all under our predicted NCAA invite time this morning, so tonight’s swims didn’t appear to affect anyone’s invite status.

Notre Dame’s Marci Barta, who came into the meet as the top seed, won the C-final in 3:47.13. Neither he nor teammate Zach Yeadon, who also had his NCAA invite secure before this week, have been close to their best times, suggesting that they may be aiming to peak at NCAAs this year.

NC State now leads by almost 200 points, but there’s plenty of drama further down the standings, as the battles for 2nd, 4th, 6th, and 8th are each separated by less than ten points each.

Raise your hand if you had Louisville going 1-2 in this event. Freshman Bartosz Piszczorowicz continues to be a huge presence for the Cardinals as he won his first individual ACC championship with a 1:33.51. Piszczorowicz jumped out to a 21.41, putting him just head of NC State’s Justin Ress, last year’s champion in this event. Ress’s teammate Andreas Vazaois turned on the gas in the middle two legs, and held a 0.25s lead heading into the final 50.

Enter Zach “Batman” Harting. The Louisville senior is know for his ability to close hard, and he proved it once again here. He was tied for 5th at the 150 mark, but split 23.56 down the stretch, overtaking Vazaois and nearly touching out his teammate Piszczorowicz, who held on to win by 0.01s.

Louisville sophomore Evgenii Somov successfully defended his title in this event. Somov split 24.30 going out, tying him with UNC’s Sterling Smith. Georgia Tech’s Caio Pumputis was only 0.03s behind both men. Smith faded, but Somov and Pumputis battled almost stroke-for-stroke the whole way, with Somov once against just out splitting Pumputis on the back half, 27.60 to 27.74, giving Somov the victory, 51.90 to 52.07.

It was an incredibly tight battle for 3rd place, with just 0.28s separating 3rd-7th. Virginia’s Keefer Barnum got his hand on the wall first, a tenth of a second ahead of NC State’s Daniel Graber.

Stewart was out in 21.33 to his feet, almost four-tenths faster than this morning, but he couldn’t bring it home quite as fast, and ended up touching in the exact same time as he did this morning, 44.44. Albiero, also swimming his 2nd event of the night, stayed close the whole way, and touched in 44.88. Joe Clark of UVA was 3rd in 45.22. Albiero and Clark are now 4th and 5th in the country, pending results from other meets tonight.

Updated scores (including all diving)

Coleman Stewart led off with a 44.36, breaking his own conference and meet records he set this morning and tied earlier this session, and Daniel Graber (51.89), Nyls Korstanje (44.94), and Giovanni Izzo (42.07) combined to bring it home for NC State in a new meet record time of 3:03.26. That time sits only behind Indiana’s 3:01.63 from last night so far this season.

Standings (including all diving points):

NC State’s lead is essentially insurmountable at this point, but as we said earlier, there are a few close races for spots further down. From a glance at the heat sheet, Virginia may have a slight edge tomorrow, but probably not the 3 or 4 A-finalist advantage they would need to close the gap.

Virginia Tech is still within striking distance of FSU, although the Hokies are probably going to find it difficult to overcome the Seminoles’ advantage in the 100 free. Notre Dame and Pitt could still make up the ground on Duke and Georgia Tech, respectively, while UNC seems pretty well locked into 10th

Boston College suffered a big blow tonight when their 400 medley relay was disqualified due to an early takeoff.  They’re 50 points behind Miami right now, whose score is locked at 161 since they only have divers and no swim team. The Eagles are realistically like to end up with 32 points from the 400 free relay, meaning they would need another 30 points from individual swimmers to avoid a last-place finish. They do have have a few swimmers in tomorrow’s circle-seeded heats, and if there were able to make a single B-final and two C-finals, it would still be possible to get those 30 individual points.

Dang! I would love to see what Coleman Stewart could do without the hundred fly before his hundred back and of course shaved and tapered!

Kanoa is on fire yall!

i wish they would update the results and live results from the womens. need the mens now not last weeks womens

Henry – please see this link for instructions on what to do. We replied this the last few times you’ve commented the same: https://swimswam.com/psa-what-to-do-when-hy-tek-live-web-results-arent-updating/

For those of us that are a “tad” technically challenged…is there a way to clear the cache on the iPhone?

Step 1 here should do the trick for you: https://www.linkedin.com/pulse/how-clear-cache-your-iphone-ipad-appzoro-technologies-inc-

Weird no Justin Ress in the medley

He was dead last in the 200 free. He must’ve really trained through this meet.

You can’t swim every relay! I’m excited to see him and a lot of the guys not rested

Fun to see other teams copying NCSU chest diamond sharpie tattoo. That’s been happening for thirty plus years. Trend setters. Everyone wants to be part of the Pack!

Wolf of Raleigh I see u changed ur name

I think Wolf of Raleigh, B1G Fan, and Ladymanvols are actually one person.

I think it is actually Rich DeSelm….

Wow backstrokers are fast these days.

interesting thing I noticed – Gust Kouvaris got a DQ for going past 15 m in both the 100 fly and the 100 back.