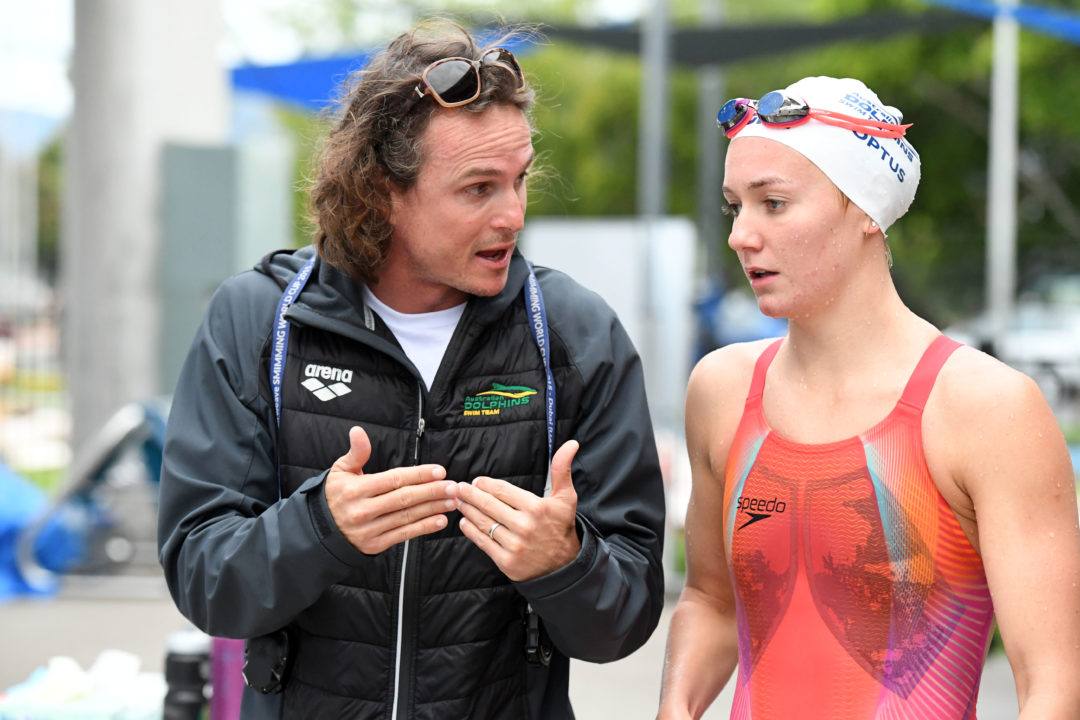 Dean Boxall, the man at the helm of St. Peters Western where stars Ariarne Titmus and Mitch Larkin call home, is making waves down under just in time for Gwangju and Tokyo. Archive photo via Swimming Australia

There’s a new teenage freestyle ace on the medal-earning scene by the name of Ariarne Titmus, choosing just the right time to break out and make her mark among the top stars heading into Gwangju 2019.

Titmus had a storybook year in 2018, snagging 3 gold medals at the Aussie-hosted Commonwealth Games, including in the individual 400m and 800m freestyle events where she clocked a new Oceanic and Championship Record in the former.

Then at the Pan Pacific Championships in Tokyo, Titmus helped lead Australia to the top of the podium in the women’s 4x200m freestyle relay, while hanging tough with American icon Katie Ledecky to race her way to silver in the 400m and 800m freestyle events.

Finally, Titmus topped off 2018 with double gold in Hangzhou, taking the top prize in both the 200m and 400m, but smashing a new World Record in the longer event ahead of Chinese teen duo Wang Jianjiahe and Li Bingjie.

Teammate and Boxall-trained Lewis also had a major breakthrough this year, winning the men’s 400m IM at the Commonwealth Games after having only earned a spot with Larkin’s withdrawal. Lewis rose to the challenge and made the most of his opportunity, ‘testing his mettle’ as Coach Boxall would say, with a lifetime best time for the gold ahead of Scotland’s Mark Szaranek and another newcomer, New Zealand’s Lewis Clareburt.

For his part, Larkin also performed very well over the course of the World Cup circuit, finishing 3rd overall for the men in terms of financial results. He swept the backstroke events at the Commonwealth Games, while also notching 200m IM gold, before earning one bronze each at the Pan Pacs and Short Course World Championships.

Larkin was in a bit of a slump after having tried out Simon Cusack and several other programs post-Tokyo. In the fall of 2017, however, Larkin settled back at his original St. Peters Western home, but now under Boxall, and Larkin’s performances have indeed begun to improve.

A lively presence on-deck, Boxall has oriented his squad around the actual practice of racing, saying “I just want them to have that mentality that they can try and win..I’ve got to create something for two years.”

The Campbell sisters of Cate and Bronte are coach Simon Cusack‘s crown athletes at Chandler, but now the trio are on the move to New South Wales. New South Wales Institute of Sport (NSWIS) is where Cusack and the Campbells will continue their journey to the 2020 Olympics.

First closing out a stellar 2018, however, Cate, or ‘C1’ as she is known, busted out the 50m freestyle gold at this year’s Commonwealth Games on the Gold Coast, while also taking a somewhat surprise gold in the 50m fly. She then tore up the Tokyo pool at the Pan Pacific Championships, taking 50m and 100m freestyle gold, while also crushing anchors on both 4x100m free and 4x100m medley relays.

Sister Bronte (C2) cruised to 100m freestyle gold on the Gold Coast before taking a much-needed body-mending break for the remainder of the year.