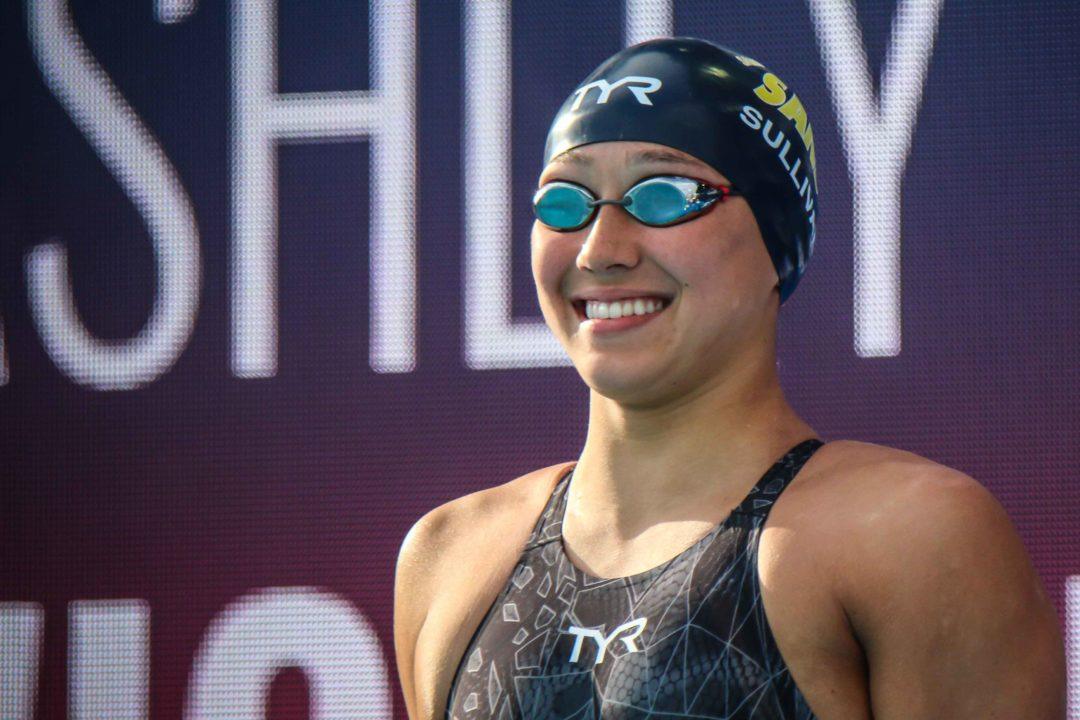 From the pool to open water, Erica Sullivan had a stellar season in the 17-18 age group. Archive photo via Jack Spitser/Spitser Photography

In addition, Sullivan finished third among all competitors of any age in the Olympic-distance 10K at the 2018 U.S. Open Water Nationals while winning the national 5K title. She qualified for the U.S. senior national team in the 800, 1500 and in open water, and would have made the 2019 World University Games team had she not declined the spot.

Luther finished the summer season as the top-ranked 17-18 in both the 100- and 200-meter butterfly races. Not only that, but she moved up to #4 all-time in the age group in both events. Her 58.58 in the 100 fly is just seven tenths off the National Age Group record in an age group where no individuals set NAG records in 2018. In the 200, Luther’s 2:08.09 is just over a second off the NAG, and came within a second of Mary T. Meagher’s historic 1982 swim that still ranks third in age group history.

Luther made the U.S. senior national team with the fourth-best 200 fly by an American swimmer of any age this year. Her long course 100 ranks 11th among Americans of any age during this calendar year.

Luther also qualified for the World University Games in two events and will represent Team USA there next summer at the senior level.

Based on his outstanding U.S. Nationals performances (B final appearances at the senior level in the 100 and 200 frees, plus a junior D-final win in the 50 free), Kibler was one of just a handful of junior men to qualify for a U.S. travel team for the summer of 2019 – he’ll appear for the United States at the 2019 Pan American Games.

Though he doesn’t have the event range of Kibler, Daniel Roy had even more impressive results in his wheelhouse: the 200 breaststroke.

Roy broke the NAG record in the 200 meter breaststroke, becoming the first U.S. 17-18 boy to break 2:10. His 2:09.73 is more than a full second faster than anyone else in U.S. age group history. Roy also won three medals at Junior Pan Pacs, winning the 200 breast and taking second by just six tenths of a second in the 100 breast.

His long course 100 breast ranks 10th all-time in 17-18 age group history, and his short course 200 breast sits 3rd all-time, just two tenths off the NAG record in that course. Roy also made the U.S. National Team on the senior level and qualified to compete at World University Games next summer based on his sixth-place finish amongst a loaded senior-level field at U.S. Nationals in the 200 breast.

Great group of swimmers and congratulations to all of them. Who knows what the future might hold, but currently the 15-16 group is a stronger group. Just say’in

Love me some Dakota Luther. Good for her.

LeVant over Kibler every day on this one.

Looking just at names when I started researching for this story, I would have agreed with you. Levant had a really flashy U.S. Nationals and has a lot more buzz/name recognition than the rest of the field.

I agree with you but I also feel like katharine should have been runner up.

So many great swimmers in this group but Kibler’s versatility is unmatched. Well deserved recognition for all.