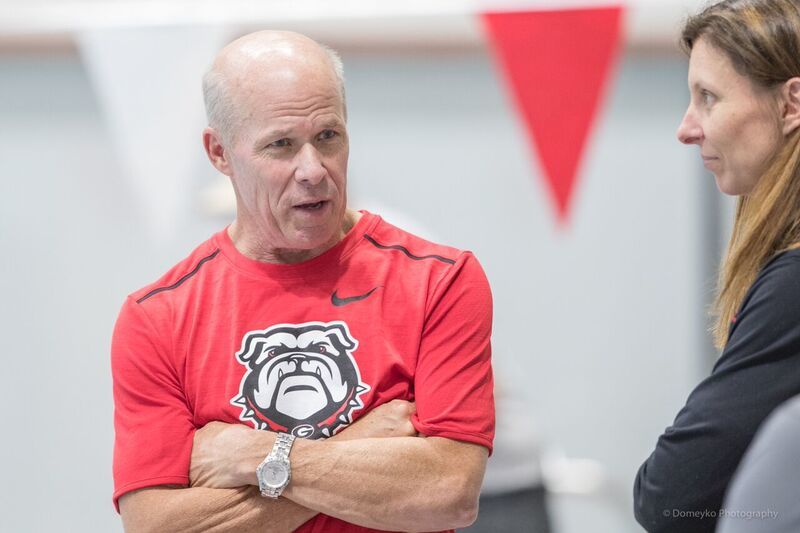 The Bulldogs will be looking for one of the best incoming freshmen classes in the nation to help bring them back into the top ten come NCAAs. Archive photo via “Rafael/Domeyko Photography”

Heading into last season, it looked like the Bulldogs had lost a lot, and sure enough, without the likes of Olivia Smoliga and Chantel van Landeghem, Georgia struggled at NCAAs, with only five swimmers registering individual points.  After winning in 2016 and finishing 4th in 2017, Georgia slipped to 11th last year, marking the first time since 1994 that the Georgia women failed to finish in the top ten at NCAAs.

At first glance, it looks like things could be even worse this year, as three of those five individual point scorers were seniors Megan Kingsley, Meaghan Raab, and Kylie Stewart.  That trio accounted for 42 of the Bulldogs’ 65 individual NCAA points, and 11 out of 20 NCAA relay spots.

But hope is not wholly lost in Athens, as Georgia brings in a star-studded group of freshmen that arguably ranks only behind Stanford’s constellation in terms of swimmers likely to make an immediate NCAA impact.

The bad news: Georgia only scored 9 individual points at NCAAs across the three shorter free events, and is losing exactly half of its free relay swimmers.

The good news: Veronica Burchill, who scored all 9 of those points with a win in the 100 free B-final, returns as a junior, and reinforcements aplenty are coming in with the class of 2022.

Burchill and Gabby Fa’amausi both went 22.3 at SECs, which puts them within about a tenth of a second of scoring at NCAAs, and they’ll continue to form the core of the Bulldogs new look sprint relays.

Georgia brings in Eva Merrell, who we initially ranked as the #1 recruit in the class of 2018, but who slipped to #7 in our re-rank, largely because she hadn’t competed, as far as we could tell, since the summer of 2017.  If she’s on her game, she’ll make an immediate impact, but she’s  so versatile that her lineup doesn’t look clear right now.  Her best 50 free time is 22.2, which puts her on the edge of scoring in the 50 free. She could swim the 100 free on Day 4, or she could end up in the 200 fly or 200 back.  Still, she’s very likely  to go a long way toward filling the relay gaps left by the departing seniors.

Harnish was the Bulldogs’ only NCAA  scorer 10th in the distance events last season, earning 10th in 500 free and 17th in 1650, so she should threaten to be a multi-event scorer this season.

While IM has long been a Georgia strength, especially on the men’s side (think Chase Kalisz, Jay Litherland, and Gunnar Bentz), last year the Bulldog women failed to score a single point in either medley event at NCAAs, and didn’t even have anyone entered in the 400 IM.  Their highest finisher was Megan Kingsley (19th in the 200 IM), who has now graduated, and Caitlin Casazza is the only returning swimmer who competed in an IM event at NCAAs, where she finished 34th in the 200 IM.

The Bulldogs’ roster lists several of the incoming freshmen as “IM,” but only Olivia Carter has a time that’s close to scoring at NCAAs, with her 200 IM personal best of 1:56.83 about a second away from what it took to make the B-final last year.  Madison Homovich has thus far been known primarily for distance freestyle, but it would make sense to see the 400 IM as her Day 3 event, and she comes in with a personal best of 4:10.92 there.

Last season, Kingsley made the A-final of both fly events, but the Bulldogs return Burchill, who finished 10th in the 100 fly.  The fly events should be a strength for Georgia this year, as Merrell, Carter, and Luther all of have personal bests between 51.9 and 52.3 in the 100 fly, which even without improvements, puts them all on the cusp of scoring.

Luther also brings in a personal best of 1:54.54 in the 200 fly, which would put her solidly in the middle of the B-final.  Considering she represented Team USA at last summer’s World Championships, where she made semi-finals, Luther could very well end up a regular A-finalist at NCAAs.  Carter has been even faster in short course, and with a personal best of 1:53.49, she wouldn’t need much improvement to make the A-final.  Additionally, Casazza swam the 200 fly at SECs, finishing 6th.

Last year, then-senior Kylie Stewart was the Bulldogs’ lone NCAA scorer in the backstrokes, finishing 11th in the 100 and 7th in the 200, while Fa’amausi and Meryn McCann picked up SEC points in the 100 and 200, respectively.

Once again, reinforcements are coming by way of the freshmen class.  Merrell has been 52.26/1:52.20, meaning she’ll be within NCAA scoring times in both events with just a small improvement.  Carter’s lifetime bests of 53.36/1:55.65 would both score at SECs, although we imagine she’ll focus on fly or free.

This was the area of biggest need, after Georgia scored no points in breaststroke at NCAAs last year.  Raab swam breast on the medley relay at NCAAs, despite not even competing in the breastroke events there herself.  None of the incoming freshmen are breastrokers, but the ‘Dawgs got some help when former UNLV swimmer Sofia Carnevale chose to transfer to Georgia.  She has a lifetime best of 59.87, which puts her on the cusp of scoring at NCAAs.  More importantly, that time is over a second faster than Casazza’s 1:00.87, which would otherwise be the fastest mark on the roster on this year, and most likely means that Carnevale will jump in on the medley relays.

Casazza will still likely score points at SECs at least, while Danielle Della Tore split 27.82 on the 200 medley relay split at SECs, faster than Raab’s split at NCAAs, and Lexi Glunn scored in both events at SECs.  All, including Carnevale, would need substantial improvements to score points in the 200 at NCAAs.

It’s getting tougher and tougher for recruits to come in with times that’ll score big points at NCAAs, but this freshmen class feels like it has a very high ceiling.  How much they develop their first year in Athens will go a long way to determining just how much the Bulldogs are able to bounce back.

They’re bringing in enough that they should not slip any more, both in terms of SEC finish (2nd behind Texas A&M) or NCAAs.  If they are able to hit on all, or even most, of their cylinders, the ‘Dawgs could end up as high as 7th or so at NCAAs this season, with the potential to move back up the ranks rapidly in the next few years.

A coach that has proven he can develop talent is Steve Bultman at A&M. Nothing against Georgia but A&M women have proven it over the last few years. Still hanging those SEC conference championship banners from the rafters in the natatorium & looking for that to continue👍

Must have “struck a nerve”?

No doubt about it, Steve Bultman is a heck of a coach as well.

Not a Georgia person here, but you are right. There is a reason why coaches like Bowman (when at North Baltimore), Shoulberg, and Gemmell trust their athletes with the Georgia coaching staff. Anyone can recruit talent. As we are seeing, few can develop it. Georgia has proven they can for decades.

Best top to bottom coaching staff in the country (if you’re going to down vote, please add what staff you think is better). They paid and are paying the price of Jack’s one year semi-suspended season where recruiting took a hit while his status was unknown (stuff it NCAA) and that continues to hurt them. They will return to top 3 (soon) as long as staff stays in place. Please don’t leave Steph …the grass isn’t always greener as a head coach.

They may have the best coaching staff in the country; but its all about recruiting. As you implied when stating that recruiting took a hit. This incoming freshman class is excellent and should do well. And sure young swimmers can be developed and improve with good coaches and proper training but no coach is going to turn a mule into a thoroughbred. Coaching is very important but talent is the trump card!