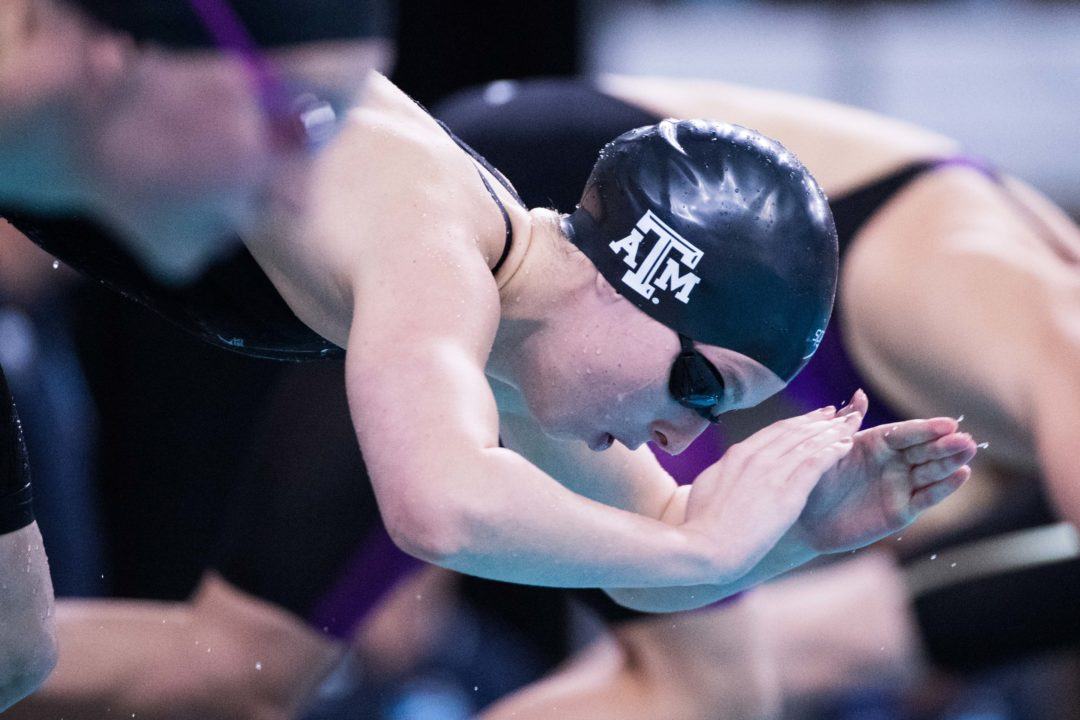 We’ll be previewing the top 12 men’s and women’s programs for the 2018-2018 season – stay tuned to our College Swimming... Archive photo via Mike Lewis/Ola Vista Photography

Texas A&M was everywhere last year, scoring at least one swimmer in nearly every individual event (only the 100 fly and 500 free were without Aggies racing in finals), and things really got ludicrous for them when there were FOUR Aggie swimmers in the 200 breast A final at NCAAs. Despite only having one elite sprint freestyler on the roster in Beryl Gastaldello, the Aggies still scored in the top 8 of the 400 free relay and had top 8 medleys, too.

This A&M team found the strength to climb to a third place finish at NCAAs, not terribly far behind Cal in a year where 2nd place was the real battle thanks to Stanford domination. A talent-laden senior class made up most of the scoring for this team, and from looking at the key losses mentioned above, it’s hard to see how the Aggies won’t take a big hit in the standings by March in 2019. There’s still hope, though, and we’ve learned not to question coach Steve Bultman and co’s ability to develop talent in College Station.

Since the sprint free grade includes the 200 free, A&M gets as high as a B- here, though as far as their 50/100 free and 200/400 free relay prospects go, things aren’t so cheery. The Aggies lost half of their sprint free relays, though, with 50/100 free A finalist Beryl Gastaldello part of the departed group as well as sprinter Kristin Malone.

The wind isn’t completely out of the A&M sails, as Emma Carlton comes in with a 22.58 best in the 50 free and in-state pickups Amanda Armstrong and Amber Conrad are at 22.77 and 23.04, respectively. Raena Eldridge, McKenna Debever, and Golf Sapianchai return from the 200 free relay at SECs, as does Jing Quah, who anchored the relay at NCAAs.

While things aren’t looking good for A&M to score the 200 and 400 free relay at NCAAs, they should still be middle-of-the-road at SECs, and 200 freestylers like Claire Rasmus and Katie Portz might be able to salvage the 400 for a finals appearance at NCAAs.

Meanwhile, things look just fine for A&M in the 200 free and 800 free relay. Rasmus returns for another likely A final appearance, while Portz will fight for a shot at scoring after falling a few tenths short in prelims last year. With Pickrem back after splitting a 1:42 at SECs and Debever back after a 1:45.9 from SECs, there’s still some great talent to work with.

Claire Rasmus has been 4:37.30 in the 500, from 2018 SECs, and she would’ve been 9th in prelims at NCAAs if she had duplicated that time. She wound up just out of B final range and added almost two seconds, but the senior has a very good shot at scoring in the A final. The spread from bottom of the A final to bottom of the B final in the 500 free is pretty thin, though, so it could really go either way.

Haley Yelle impressed as a freshman last season with a 4:38.52 in a last chance swim, which would’ve B finaled at NCAAs, but she couldn’t replicate that at the big meet. She did finish 21st in the mile with a 16:08.04, so she’s a potential scorer there, too. Katie Portz was 4:41.47 mid-season but wasn’t able to improve during champs season.

Freshman Gabrielle Kopenski and her 15:56/4:37.9 times from early high school are intriguing. She’d be an immediate scorer in both the mile and the 500, but because of how dated her bests are, things get iffy.

A&M could end up either scoring quite well in these events or fail to score at all, so they middle out at a B-.

It’s true that the Aggies lost a significant senior class, including IM juggernauts Bethany Galat and Lisa Bratton. The good news for this team is that in addition to having a front-end IM group that only Stanford and Cal can rival, the Aggies are incredibly deep here.

A key part of that front-end is Sydney Pickrem, who returns for her senior year. If anyone can challenge Ella Eastin for the 200 IM title, it’s Pickrem, who was 1:52.35 in that event at NCAAs. She’ll also be a top candidate for 2nd behind Eastin in the 400 IM, as she was 3:59.0 at NCAAs.

McKenna Debever and Anna Belousova are both 1:56’s returning in the 200 IM, while Monika Gonzalez Hermosillo is back after dropping a 4:08 in the 400 IM last year. Rising sophomore Camryn Toney was 4:09.80 at a last chance meet after SECs, and she’s riding a big improvement curve after a 4:16.64 PR from high school.

Losing Gastaldello is tough, but pure sprinter Emma Carlton comes in at a great time to try to fill in on the medleys. She’s been 52.11 in the 100, just off the 51.92 it took to score at NCAAs last year, and sophomore Jing Quah‘s 52.00 from SECs puts her in the running for that relay spot in the 400 medley, too. Both could score in the 100 fly, but it’s no guarantee.

The 200 fly has much more NCAA scoring potential for the Aggies between Quah and another sophomore, Taylor Pike. Quah is the defending SEC champ in this event (1:53.05), though she gained a lot of time and missed scoring in this event at NCAAs. That time, though, is good enough for an A final appearance if she has a good NCAA meet this coming year. Pike, meanwhile, put it together in March and went 1:54.40 at NCAAs to touch 12th.

Bratton held things down on the backstroke front for the Aggies, and Gastaldello was a more than capable second option for relays. Now, though, there’s no go-to backstroker for the Aggies.

Raena Eldridge is the top returner in the 100 back (53.14), and Pickrem and Sara Metzsch hit 53-mids last year, too. Of course, Pickrem has other things to be doing besides swimming back on their medleys. Metzsch was also 1:55.0 in the 200 last year, which is solid, but this is not a backstroke group that can hang with the top-8 programs that A&M will be dueling with this season.

The sprint weapon freshman, Carlton, brings in bests of 25.0/53.4. The 50 is pretty solid and might make do for the 200 medley, and any big developments from her in backstroke would be great for the Aggies, but her bread and butter has been sprint fly.

200 breast runner-up Galat *AND* medley breaststroker and individual scorer Caneta both leaving might spell disaster for any other program, but not the Aggies. While Cal and UGA have had their breaststroke woes, College Station is brimming with talent in that discipline.

Anna Belousova returns after an A final performance in both breaststrokes, and she actually beat Caneta in the 100 by several tenths, meaning the Aggie 400 medley may improve from last year on that leg. Pickrem will be the fastest returner besides Lilly King in the 200 breast, meaning the Aggies will probably get two women into the 200 breast A final after getting four in last year.

Sprint free takes a huge hit due to Gastaldello’s departure, and the medleys may run into trouble finding a strong enough lead-off leg. The sheer depth on this roster shows, though, as A&M will still have a fantastic IM and breaststroke group led by Pickrem and Belousova.

Rasmus and Portz will be key in keeping the free relays together, Quah and Pike could do substantial damage in butterfly, and key sophomores like Yelle and Toney will be relied on to pitch in individually. Freshmen Kopenski and Carlton might end up yielding considerable contributions, while Carlton will be a very important piece in the medley and sprint free relay re-works.

A&M will be hard-pressed to repeat in the top 3 with their relays under renovation, but there are still several high-impact individuals on this roster who have a proven record of getting the job done — this team is down, but they’re not out.

Steve Bultman is one of the best at developing talent. This team will get faster as time rolls along!

Coach Steve and Coach Tanica have built a formidable force at A&M, and this incoming class, with the current talent load on the team, will be no different. They are a class act on and off the pool deck and it will be fun to see what’s in store for these ladies!

Is A&M still going to have something like 60 swimmers on their roster like last year? I bet a lot of their swimmers get kicked in the head in practice.

Proper use of hyperbole involves using a number so beyond-reason, that nobody would doubt that you are using hyperbole.

Don’t forget that A&M opened a new pool designed specifically for the varsity teams to train in recently, so there’s lots of space.

(A&M also has the largest enrollment of any physical college campus in the country. Only UCF is close. For sports without… Read more »

An asterisk on the largest enrollment fact: That is only true if you include students enrolled at satellite locations such as Galveston and Qatar. There were 63,000 at College Station last fall. UCF had 66,000.
https://dars.tamu.edu/Student/Enrollment-Profile
https://ikm.ucf.edu/facts-and-reports/enrollment-statistics/2017-18-enrollment/

I will be surprised if they are not in the top 5. Sydney P. will be dominant.

Pickrem is a great swimmer, but I don’t see a scenario where she’s ‘dominant,’ given that she still is racing Lilly King and Ella Eastin in her 3 primary events.

Missed Caroline Thiel as a key addition. She had a great summer. I’d include Mollie Wright too.