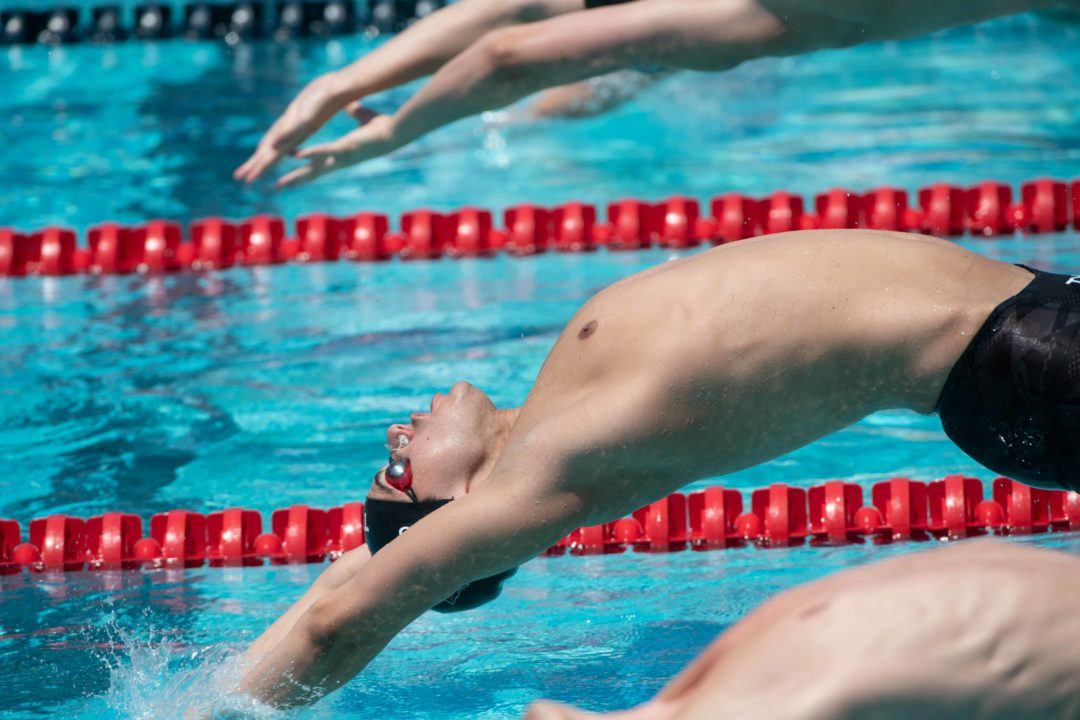 Louisville has a good chance of moving up from last year's 9th place NCAA finish thanks to a strong returning core. Current photo via Mike Lewis/Ola Vista Photography

Facing some big losses due to departing seniors, including 15 of their 20 relay spots from 2017 NCAAs, the Cardinals actually got better this season.  Freshmen like Nicolas Albiero, Evgenii Somov, and Daniel Sos all came up big at ACCs, where Louisville finished 2nd behind NC State.   At NCAAs, Albiero joined with Andrej Barna and Zach Harting to form the core of all five relays, which made three A-final and two B-finals.  Additionally, Louisville scored in 8 of 13 individual events, including points in every discipline except IM, and the Cardinals finished 9th overall, equaling the program’s best-ever NCAA finish.

While Louisville managed to grab 15th in both the 200 and 400 free relay at NCAAs, they did that with only Barna scoring points there in the shortest freestyle events.  He split 18.54 anchoring Louisville’s winning 200 medley relay at ACCs, split 42.02 anchoring their 400 medley relay in NCAA prelims, and made the 50 free B final at NCAAs as well.  He should make that B-final again, but most likely won’t swim the 100 free individually in order to focus on all five relays.

Albiero and Harting had some nice free splits, with both of them managing 42-lows on the 400 free relay.  Mate Kovacs has steadily improved over the past few years, and now with best times of 19.76/43.68, he was the 4th man on both of the shorter free relays at NCAAs, splitting around 19-mid and 43-low.

Harting made the B-final in the 200 free, while Sam Steele rounded the 4×200 relay with a 1:34 split.  The freshman with the fastest 200 free time coming into this season is Colten Paulson, whose 1:35.93 would put him in the B-final at ACCs.

Marcelo Acosta has steadily improved over the past few years, and as a junior last year he was the team’s highest individual point earner at NCAAs, thanks to a win in the 500 free B-final and a 5th place finish in the 1650s.

Harting, T.C. Smith, and Steele all scored in the 500 free at ACCs, although Harting is unlikely to swim the 500 at NCAAs due to relay duties.  Smith showed some substantial improvement in the mile last year, clocking a 14:53.60 at a last chance meet, and he could eventually pick up some NCAA points there.

Joining the team at mid-season, Sos made an immediate impact for the Cardinals at ACCs, where he finished 3rd in the 200 IM (1:43.86) and 4th in the 200 IM (3:42.68).  Etay Gurevich backed up a strong freshman campaign by finishing 5th and 2nd, respectively, at ACCs.  Neither scored in the 200 IM at NCAAs despite dropping moderate amounts of time, and Gurevich couldn’t match his 3:41.30 from ACCs, so he just missed scoring for the 2nd straight year in that event.  Both men should have solid chances of scoring in one or both of the IM events come next March.

They’ve got some depth here at the conference level, with another three guys picking up IM points.

Albiero and Harting make for a strong pair in the 200 fly.  Albiero won the event at ACCs, and while neither was able to make the A-final at NCAAs, given the insane times everyone threw down, those two are about as solid for locks for the B-final as you could want, and both should challenge for A-final spots this year.  Both are also solid at the 100 fly level; Albiero went for the 100 fly/back double at ACCs, but couldn’t do that at NCAAs with swimming all five relays, while Harting opted for the 200 free on Day 2 instead.

Harting will be heading into his senior year after a great summer; he had a memorable final 50 at USA Summer Nationals to qualify for Pan Pacs in the 200 fly, then turned that into a spot on next summer’s World Championships team.

ACC depth is there, with another three scorers, and three freshmen come in with sub-50 lifetime bests in the 100 fly.

Albiero improved from 47.23 to 45.05 in the 100 back this year, and locked down the leadoff leg for the Cardinals’ medley relay despite the loss of Grigory Tarasevich.  He finished 6th in the 100 back at NCAAs, and should be a safe bet to make the A-final again this year.  No other Louisville swimmers even swam a backstroke event at NCAAs, but Nikolaos Sofianidis had a promising freshman campaign, taking 11th in the 100 back (after swimming the 100 fly earlier in the session) and 5th in the 200 back at ACCs, and less than half a second away from making the NCAA cut in the 200 back.

Carlos Claverie had been a mainstay of the Cardinals since his sophomore year, and he wrapped up his college career with a pair of B-finals at NCAAs and very solid spilts on Louisville’s medley relays.  But the Cards shouldn’t miss a beat here, as Somov had an impressive freshman campaign.  He swept the breaststrokes at ACCs and made 100 breast A-final at NCAAs.  He then slipped a bit in the 200 breast, 29th, but his 1:53.05 from ACCs would’ve made the A-final had he been able to repeat it in prelims.

It’s not often that a program with five scoring relays only loses two legs, and even aside from that, there’s plenty of reason to be optimistic for the Cardinals.  Seniors Acosta and Harting are experienced veterans, and the trio of sophomores who hit it big last year could all score even more points at NCAAs.  Sure, it’d be nice if they had a few more sprinters to help the core spread out relay duties, and if one of the big guns goes down, there’s not a lot of depth, but assuming no disasters, Louisville has a good shot at improving on last year’s 9th place NCAA finish.

Etay Gurevich is not listed on Louisville roster anymore.