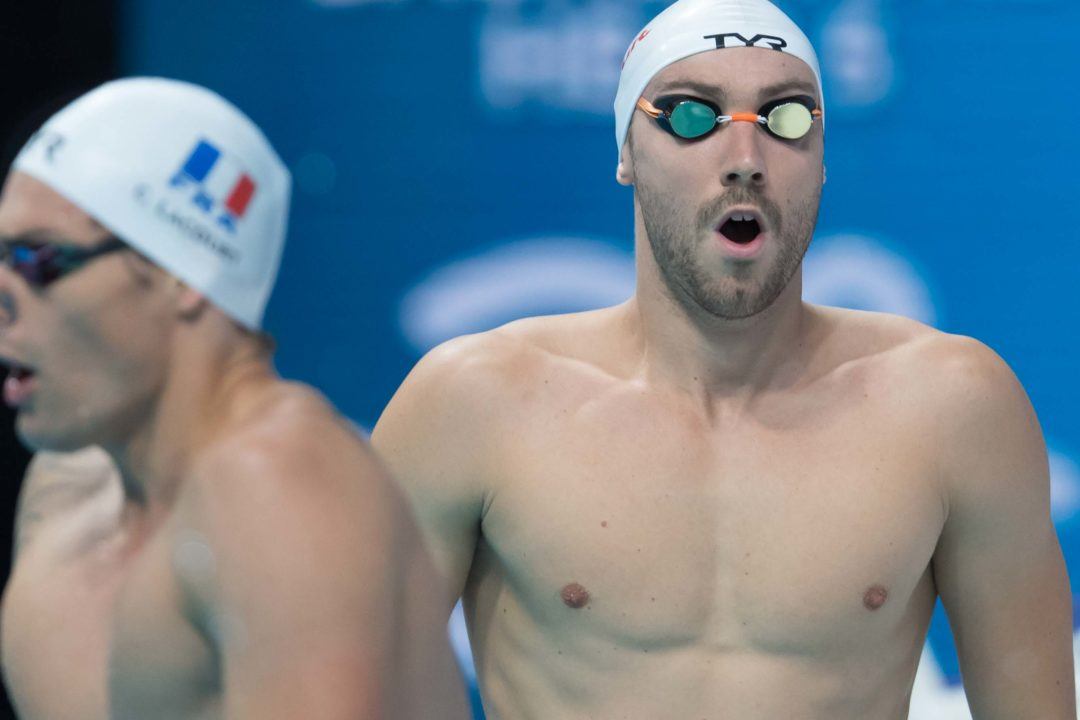 Nine swimmers, including Jérémy Stravius, met the FFN’s qualification standards for the 2018 European Championships on the first day of French Elite Nationals in Saint-Raphaël.

The French Elite National Championships kicked off today in Saint-Raphaël, France. The meet serves as the selection for the 2018 European Championships this August in Glasgow, and nine swimmers met the FFN’s qualification standards on the first day. Those include:

As a reminder, the FFN’s criteria for making the French squad for European Championships are as follows: The four fastest swimmers who achieve, in prelims, the qualifying times in Table 1 below AND who place among the top four eligible (i.e., French nationality) swimmers in the final of that event, will be selected to represent France in Glasgow.

It was a bittersweet victory for Fantine Lesaffre, who failed to qualify for Glasgow by half a second with a morning time of 4:43.92. While her evening swim of 4:38.98 was 4.5 seconds under the standard, the French Federation made it clear that the qualifying times were to be achieved in prelims here in Saint-Raphaël. The goal of course is to train French elite swimmers to qualify for more international finals by going fast in the morning. Still, it was a gutsy swim for Lesaffre who knew she wouldn’t qualify in the event but nevertheless put up a great race in the final. Touching behind her were Cyrielle Duhamel and Lara Grangeon. Both met the qualifying standards for Euro 2018 by swimming faster than 4:43.42 in prelims (they went 4:42.21 and 4:40.02, respectively) and placing among the top 4 in finals.

David Aubry lowered the PB he had achieved in prelims (3:48.85) to win the men’s 400 free with a new lifetime best of 3:48.81. His morning swim qualified him for Glasgow along with Roman Fuchs (3:49.19 in prelims). Fuchs finished third in the final with 3:50.44, just behind open water specialist Logan Fontaine (3:50.13). Fuchs was encouraged by his swim and stated in the post-race press conference that he was looking forward to the 1500 free.

Charlotte Bonnet punched her first ticket to Glasgow, winning the 50 free in 24.78 (24.81 in prelims). She had said in an interview on Monday that her goals for Saint-Raphaël were to qualify for Euros in the 50 free, 100 free, and 200 free and to lower her French national record in the 100 free.

Anouchka Martin (25.24) et Lena Bousquin (25.43) placed second and third in the final, although only Martin had cleared the qualifying time of 25.33 in prelims (she went 25.24). Marie Wattel, who swims for Montpellier Métropole Natation but goes to school and trains at Loughborough University, went 25.31 in prelims but didn’t swim the final. Marseille sprint specialists Mélanie Henique (25.42 in prelims) and Béryl Gastaldello (25.43 in prelims) didn’t meet the qualifying criteria.

Jeremy Stravius was the lone Glasgow qualifier in the men’s 50 back. The only one to break 25.20, he did it in both prelims and finals with 24.85 and 25.01, respectively. Maxence Orange edged Paul-Gabriel Bedel by .02 in the final to earn a silver medal in the distance.

Marie Wattel punched her ticket to Glasgow with an easy win in the women’ 100 fly with 58.35, after having gone 58.66 in prelims. She was unhappy with her performance, though, and said after the race, “I was a little disappointed with my time. I would have liked to swim a 57. Still, it equals my second-fastest time but it’s never easy to swim “’alone.’”

Second place went to Margaux Fabre in 59.85, although she was not able to meet the qualifying criteria in prelims with her morning swim of 59.65.

Théo Bussière cracked a big 59.46 to take down the Championship Record and log his first sub-minute 100 breast. He was the only qualifier for Glasgow in the event (1:00.27 in the morning, nearly 2 seconds ahead of prelims runner-up Thibaut Capitaine). Tunisia’s Wassim Elloumi edged Capitaine for second place in the final, 1:01.83 à 1:01.86. Antoine Viquerat was the third French swimmer with a time of 1:02.08.

There is a generational gap, and despite relatively easy time standards, the men didn’t do well at all.

That’s the normal level of French swimming. What happened in the last 10 years thanks to 5 or 6 stars was not normal.

At least they aren’t requiring National Records to qualify like they did a couple years ago. Some brain stem figured if they made the qualifying times ridiculous, the swimmers would rise to the challenge. Instead, it destroyed the French swim program. Good to see them back on track.

It was a system that has worked elsewhere, im different sports, but French Swimming didnt have the resources or talent pool to do so – It was ludicrous!

I don’t think canada ever had more than one event QT being under a NR. I could be wrong (where are teh stats geeks)

We have sent enough “tourists” who have slept in the morning prelims at last international competitions. I hope the young Lesaffre will learn the lesson. She’s talented and I’m sure she will quickly rebound to make the team thanks to another event.

Wait the morning sessions qualify and the night sessions are meaningless? What a dumb system.

Not quite. You still have to finish in the top 4 in the finals to make the team, though it’s hard to see many events where someone could hit the QT in the morning and be so much slower in the evening that they don’t even place in the top 4.