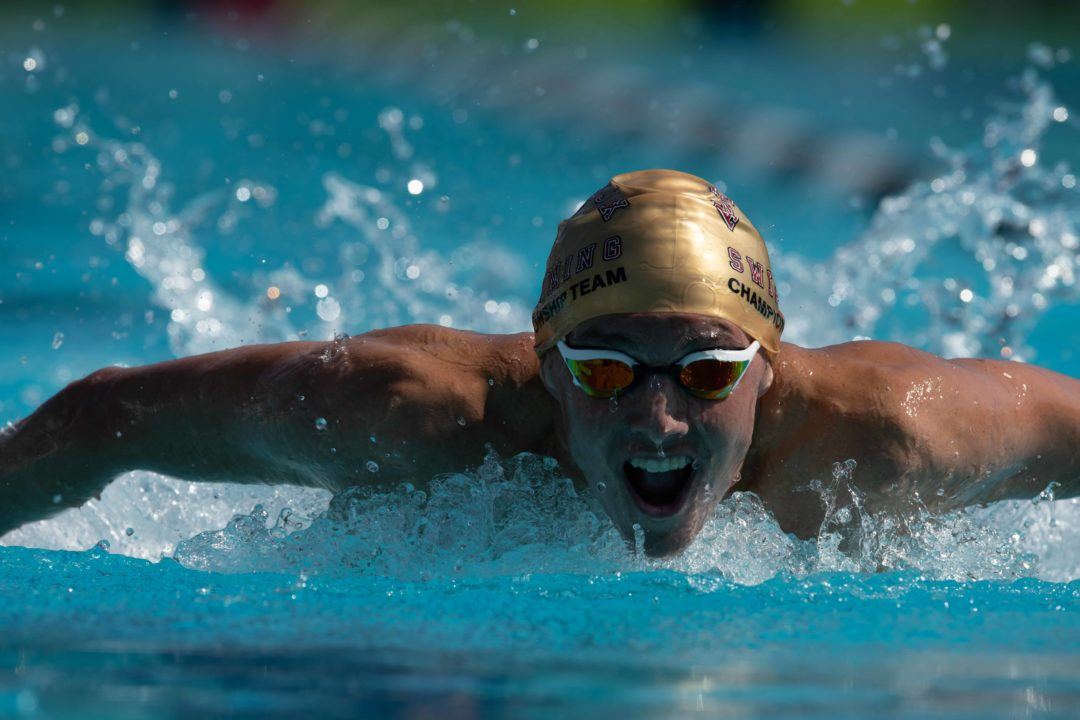 Episcopal's Cole Crane took a pair of wins in region 1. Most notably, he picked up an AA-A time in the 100 fly, an event in which he was the 2017 runner-up. Archive photo via Mike Lewis/Ola Vista Photography

The Florida High School Athletic Association’s 2018 state meet series is in full swing, with the Class 1A regional meets now complete. The top 24 swimmers from the combined regions will move on to the Class 1A State Swimming and Diving Championships on Friday, November 16th.

Saint Andrew’s Shayna Fetes won the 100 breast in region 4 with an AA-C time of 1:03.95. Fetes is the defending state champion in that race. Coming up with a silver medal there was Pine Crest 7th grader Sara Lin (1:05.33).

King’s Academy freshman Joshua Zuchowski picked up an AA-A standard in the 100 back. He matched the standard to the letter, hitting the wall in 49.66 for the region 4 win. Zuchowski was also the regional champion in the 200 IM with his 1:52.61. Another AA-A time came out of region 1 as Bolles’ Paul DeGrado won region 1 with a 55.93 in the 100 breast. DeGrado is the top seed for states in the 200 IM, winning regionals in an AA-C time of 1:51.63, just ahead of Zuchowski in the seeds.

Episcopal’s Cole Crane took a pair of wins in region 1. Most notably, he picked up an AA-A time in the 100 fly, an event in which he was the 2017 runner-up. Crane popped a 48.89 to dominate his region and will be the top seed for states. He also took home a title with an AA-C time in the 50 free, where he’s the defending state champion. Crane’s 20.95 in that race makes him the 2nd seed for states behind Trinity Prep’s Jan Callazo Torres, who won region 2 in an AA-C time of 20.82.