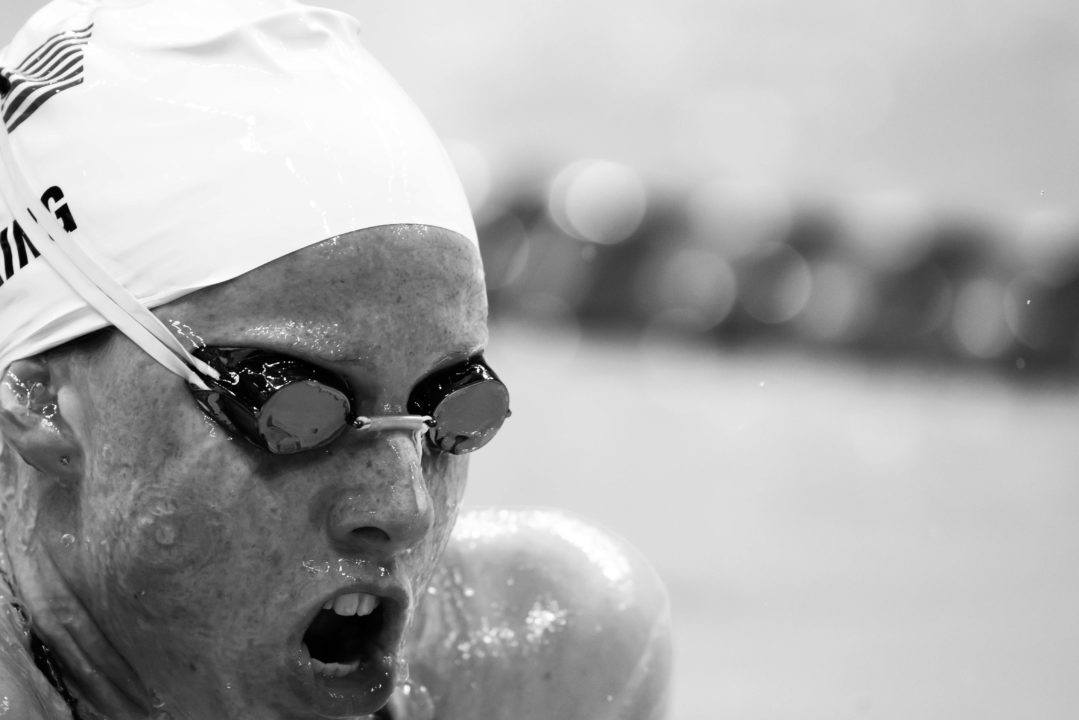 Lilly King and Yuliya Efimova will go head-to-head three times in Budapest, with the 50 breast the third and final round. Current photo via Mike Lewis/Ola Vista Photography

Five Swimmers Scratch ‘B’ Finals To Avoid Doubles On Day 3 of U.S. Open

Nation’s Capital swimmer Camille Spink scratched out of the women’s 100 back consolation final in order to focus on the 200 free on Friday in Greensboro.

After their well documented feud last summer in Rio, American Lilly King and Russian Yuliya Efimova are set to face-off three times at the World Championships this year after only going head-to-head once at the Olympics.

King, who triumphed over Efimova in Rio in a time of 1:04.93, has made a dramatic improvement in her 200 since placing 12th at the Olympics. That improvement, plus the addition of the stroke 50s on the World Championship schedule, sets the two up for a potential three-round battle.

Relative to King, Efimova is much more of a 200 swimmer, with two Olympic and two LC World Championship medals to her name in the 200 breast. She’d have to be the favorite in that event, and despite Efimova (1:04.82) ahead of King (1:04.95) in the 100m world rankings, it’s hard to bet against King there after her performance in the Olympic final.

If it all goes that way, the 50, which has it’s final during the last session of the meet, could settle the score between the two.

Many would point to King as the favorite in the 50 given the speed she showed winning the 100m Olympic title and her #1 spot in the world rankings, but Efimova has won a medal in the event at the past four World Championships, including gold in 2009 and 2013. She’s also done four of her seven fastest swims ever this year, but King’s ability to perform under pressure leans me in her direction over 50 metres.

Whether they come into the last day tied 1-1 or not, this will be another epic showdown between the two. The two of them are the overwhelming favorites, but there are plenty of others who can’t be overlooked.

Overshadowed by the King/Efimova storyline, Katie Meili delivered big time in the Olympic final to win the bronze medal. She has continued to perform well this year, lowering her 50 PB down to 30.11 to tie her for the 8th fastest performer of all-time. It looks like there’s a good chance it’ll be Rio all over again for Meili in both the 50 and 100, finishing behind King and Efimova, but she has the speed to leapfrog one of them if they have an off swim. Meili will also begin law school soon after the championships, but plans on continuing her swimming career.

World record holder Ruta Meilutyte of Lithuania was the unexpected Olympic gold medalist five years ago in London, shocking American Rebecca Soni among others to win the 100 breast. She continued the momentum at the 2013 Worlds, winning gold in the 100, silver in the 50, and setting world records in both. A so-so 2015 Worlds was followed by a disastrous 7th place finish in the 2016 Olympic final of the 100 breast.

She has since changed coaches, and is feeling rejuvenated under Paulius Andrijauskas. Still just 20 years of age, Meilutyte has a bright future in the sport. Ranked 10th this year at 30.73, she may need more time under her new coach to fully adjust, but nonetheless should be a finalist and potentially challenge for the bronze. Despite her performance in Rio, she was the fastest woman in the world in this event just last year at 29.98.

Defending World Champion Jennie Johansson can’t be counted out, especially given her PB in the 100 this year. Seeded 6th in the 50 at 30.32, a re-creation of her 30.05 from Kazan could slide her in for a minor medal. Great Britain’s Sarah Vasey is right there in the medal picture as well at 30.30, and has done her four fastest swims ever this season.

Among those who will fight it for a spot in the final include 2015 finalist Hrafnhildur Luthersdottir of Iceland, who won the 2016 European Championship silver behind Johansson, and Finland’s Jenna Laukkanen who won bronze. The Italian duo of Martina Carraro and Arianna Castiglioni are right there as the 8th and 9th seeds, just behind Japan’s Satomi Suzuki who has never won a World Championship medal but has three Olympic medals from London 2012.

Jessica Hansen (AUS) and Sophie Hansson (SWE) will both around that 30.7 to 30.8 range where the final cut-off will likely come, as will Canadian Rachel Nicol who was 5th in the 100 breast in Rio. Other notable names competing in the event are Viktoria Zeynep Gunes and Rikke Pedersen, both of whom will feature more prominently in the 200 breast.

Ruta for the upset!

I’ve read on Yulia’s facebook that she’s just passed her 15 doping test of the year.

At least she can say that she’s been tested enough. ?

Did she post on Facebook the times she came up positive in the last 5 years? Maybe not the most objective source.

That is not in the least logical .

King, Johansson, Meilutyte. There you go. Unexpected podium (I guess ?) but I’d like to take a risk here.
Efimova will be very focused on the 200. Meanwhile King will destroy the field in the 50. Would love to see Meilutyte get a medal here.

I have to give this to Efimova. She relies on her insane closing speed in the 100 and 200, but she is somehow able to harness it in the 50. She flies over the water the second 25, must faster than anyone else in the world. And with her work with Schoeman, the advantage people could get on the start is minimised. I am rooting for King though.
I don’t see either hitting the WR though. I think people forget just how good Melutyte was in 2013, though a drugged up Efimova (she got caught in december of 2013) beat her in the final.
The 100 record is way out of King and Efimova’s league, 1:04.3 is on… Read more »

Somehow able to harness it…. hmmmm it must be hard work!

Think this is a touch too much. I’ve been vocal about what I think of Yuliya, but she was and is the most talented breaststroker of generation imo. She succumbed to drugs, which is not just a huge shame for our sport, and her, but swimming fans. Not only has she underachieved, she has done so whole cheating. A waste of sublime & rare talent.

She was indeed one of the most talented Breastrokers ever. Drugs can only do so much, and she could have been great, but she sadly had to choose the dirty route. Real shame.

Even a cheat needs to work hard, true.

This preview is dope