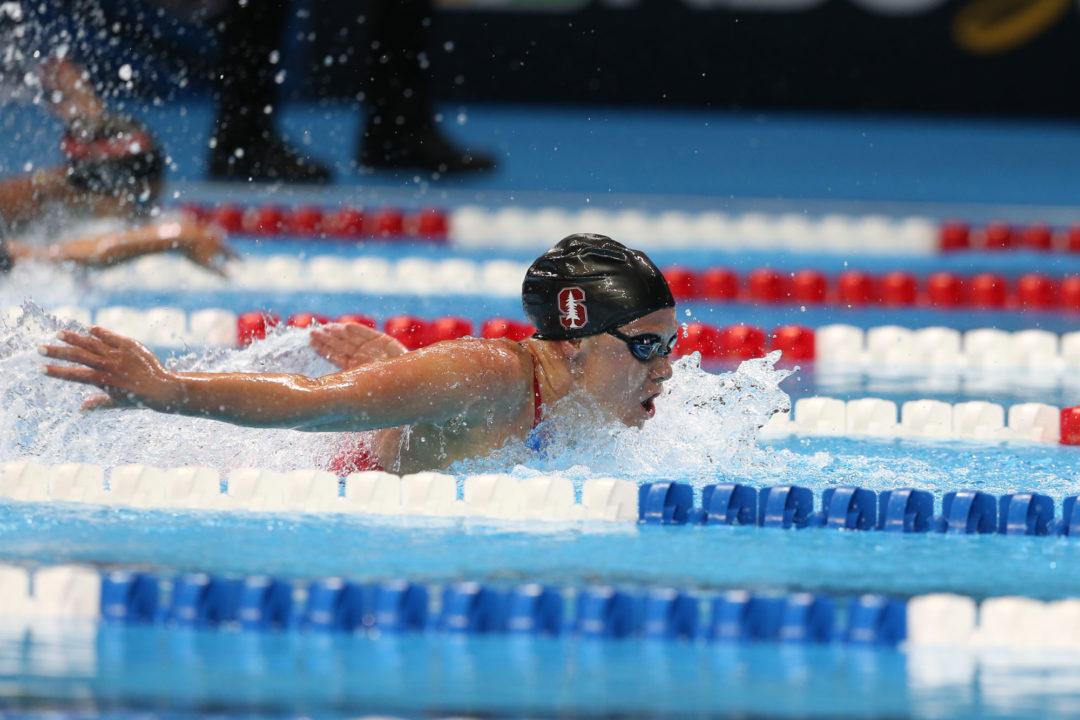 Last year, Kelsi Worrell was the closest anyone has ever come to Elaine Breeden’s 1:49.92, which stands as the NCAA, American, and U.S. Open record eight years later. With Worrell graduated, #4 all-time Ella Eastin will lead the charge in 2017. Eastin, a Stanford sophomore who is known more for her IM prowess, posted a 1:51.04 to take 2nd behind Worrell, which was far ahead of any other competitor (no other swimmer broke 1:53 in the final last season). She’s the top seed this year and the favorite for the NCAA crown.

Sarah Gibson, at-once a butterflier, sprint- and distance freestyler, comes in as the 2nd seed. The Texas A&M senior has been on an impressive improvement rate through college, and while she’s better in the 100 when it comes to fly, we can never forget her ability to swim a great 500 free. She comes in seeded over a second faster than last year (1:52.64), putting her right in contention with USC sophomore Madison Wright (1:52.67) and Georgia’s Chelsea Britt (1:52.72). The latter is a transfer from Florida State, and has lopped about eight tenths off of her personal bests in both the 100 fly and 200 fly since joining Jack Bauerle’s program.

McLaughlin, who was hindered for months by a neck injury she sustained on Cal’s winter training trip last season, has certainly recovered back to form. It was unclear through the spring and over the summer if she’d be able to continue to elevate her game, but she has had a fantastic season. After dropping a 1:55 in Cal’s January dual with USC and a 1:54 against Stanford two weeks later, McLaughlin went a best time of 1:53.80 in prelims at Pac 12s, only to improve to 1:53.29 in the final. Her ability to bounce back from the injury is exciting, but she’s going to have to be considerably faster to challenge Eastin– her long course speed (2:06.95 summer ’15), of course, suggests that she’s capable.

Dalesandro, meanwhile, erupted to win the 2017 100 fly Big Ten title (50.45), destroying her previous personal best of 51.75. Her 200 fly at Big Tens was also a new best, and considering how well she’s been swimming, the Hoosier senior is not one to count out in Indy (pretty close to home turf). McLaughlin’s Cal teammate, Noemie Thomas, along with Texas women Remedy Rule and Lauren Case round out the 11 ‘A’ cuts in this event.

Dark Horse: UGA’s Megan Kingsley made the A final last year, finishing up third. She’s been a second or so slower this season than she was last season, but she’s certainly capable of a sub-1:54 performance and could jump into the A final as the 14th seed.

I think that Remedy Rule is the dark horse in this race. She has beaten Ella, Katie, Gia, and Noemie head to head this season at dual meets. She also did not have a full taper for Big 12s due to the lack of depth in that conference. Should be a very exciting race.

I think Ella Eastin wins that race. She’s great in yards and she looks as good as last year. Katie McLaughlin is on the right track. Unlike Eastin she’s better in long course but I would be pleased to see her finish second in 1.52. Madison Wright has a very good season so far. Remember she’s still the 11/12 NAG record holder in 2.00.00. Easy to remember the time.

And talking about the women’s 200 fly overall in USA, looks like that event is soon to be owned by the Martin family. 🙂
Ruby was 4th at last olympic trials at 16. She has swum 1.54 in yards this season so far.
And I’ve seen that Scarlet, I… Read more »

This is going to be a fun race to watch. Looking forward to it.

All races will be fun to watch. For different reasons. 😎

what school did elaine breeden go to?

wait, never mind. it said what school what she went to on the top. whoops

What about Nazieblo? All American last year and looks to be primed for this year.

What was Worrell last year?