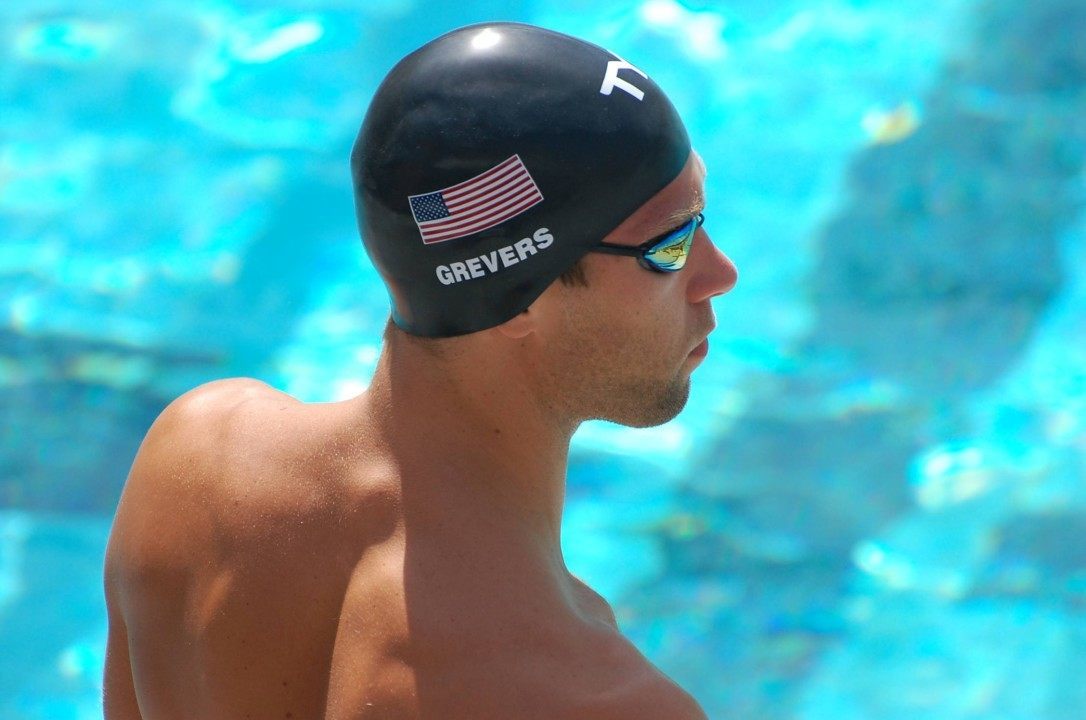 Murphy, who set the World Record in this event last summer, is the favorite going into the 2017 U.S. World Championships Trials, but veteran Matt Grevers won't make it easy. Archive photo via Anne Lepesant

Last summer, the 100 back was one of the most anticipated events at U.S. Olympic Trials, as 3 frontrunners battled for 2 spots on the Olympic team. In Omaha, Ryan Murphy paved his path to the top of the Olympic podium, while 2012 Olympic gold medalist Matt Grevers fell just short of making the team to David Plummer. Now, Grevers seeks his return to international glory in Budapest.

Murphy, who set the World Record in this event last summer, is the favorite going into the 2017 U.S. World Championships Trials. Veteran Grevers won’t make that easy, however, as he’s the fastest American so far this year, and has put up multiple sub-54 swims in season.

Though Plummer is now retired, it’ll still be a fight to make the team. Murphy’s Cal teammate Jacob Pebley made huge strides last summer. He’s looking to add the 100 back to his international meet regimen after making the 200 back final in Rio. Last summer, Pebley busted out a 52.95, and he’s now had his first year of full focus on long course as a pro swimmer.

Up-and-comers Justin Ress and John Shebat had great NCAA seasons, and could be a major threat here. NC State’s Ress is already a likely finalist after demolishing his best time this season, lowering it from a 54.90 to a 53.49. Texas’ Shebat (54.20) went toe-to-toe with Murphy at NCAAs, and his success could translate into a big drop in the long course pool as well.He was an Olympic Trials finalist in this race last summer.

Age group phenom Michael Taylor, a Florida commit, was an Olympic Trials finalist in both backstrokes. Taylor broke onto the National Team scene when he threw down a 53.77 in prelims at Trials. This summer is his last shot to take down the 17-18 National Age Group Record of 53.38 done by Murphy in 2013.

Fellow National Teamer Sean Lehane has nearly cleared the 54-barrier himself. He’s been just over a second shy of that this season with a 55.21 at the 2017 Arena Pro Swim Series stop in Atlanta.

NCAA standouts Luke Kaliszak and Taylor Dale showed great speed at NCAAs when they both put up sub-45s, and each have a shot at making the final. Georgia’s Dale was a semifinalist at 2016 Trials, while Kaliszak narrowly missed out with an 18th place finish in prelims.

DARKHORSE: Arizona State’s Cameron Craig was on fire during his freshman season. Though his focus was shifted away from the 100 back in the yards pool, he may take a shot at this event in Indianapolis. Craig put up a personal best 54.74 in this event at 2016 Junior Pan Pacs, and was just one place shy of making the semifinals at Olympic Trials.

Did Connor Oslin retire? I would absolutely expect him to be top 8.

Yes I believe he retired and began medical school.

I think Ress will be second. Kids a stud, but USA backstroke is one of the most dominant sporting entities of all time.

I’d love to see Grevers making the Worlds team, but would be very wild to see the new comer Justin Ress sneak in for 2nd

I think Pebley’s 52.95 at OT was the most under rated swims of 2016. I can see why people overlook it though considering 4 people were sub 53.

4
0
Reply
He Gets It Done Again

It’s been a quarter century since the USA men lost the 100 back at the Olympics. Looks like we’re pretty stacked for future too.

Don’t sleep on John Shebat.. made Murphy work for those NCAA titles in March and that momentum should likely translate into his long course swimming, along with a confidence boost from his success at NCAA’s

I don’t think anyone is sleeping on Shebat after that. I think he’ll make a big drop.

Texas does some good LC training. Making the team would mean a big PR, but then again he had major PR’s in short course.

Shebat has a ridiculous field to work through. I haven’t run the numbers (although now I really want to), but I think one trend in short course improvements translating to long course is a 1-2 year time period between the two matching up. I’d consider Shebat a serious contender for 2018/2019, but I don’t see him taking top two this year in long course.

What about Dean Farris? He’ll take everyone down