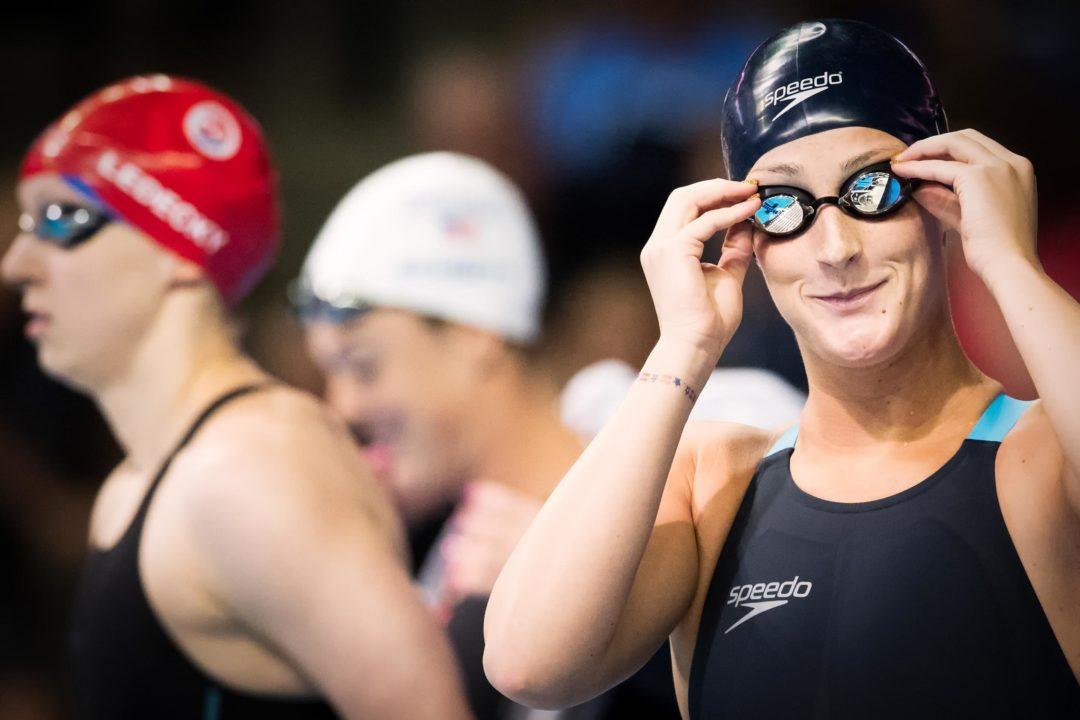 Emerging as the #2 distance woman for the Americans, Smith, much like Ledecky, is in her own world in this event. Ledecky has been well out ahead at 8:15 this year, while Smith’s 8:23 is a solid six seconds ahead of Cierra Runge. Smith is doing to the rest of the field what Ledecky is doing to Smith, and the UVA alumna again looks like the best choice for the 2nd spot behind Ledecky this summer.

While her first season with the Wisconsin Badgers didn’t show any progression from Runge, she’s right about where she was last year before Trials. She went 8:28 June 4th of 2016, and went 8:29 June 5th of this year. Of course, while her 200 free was pretty outstanding for her and landed her a spot on the American gold-winning 800 free relay, she only swam in prelims of the 800 free after going 8:31 and making top 8. Runge has been all over the place the last three years, and while she’s one of only three Americans to have broken 8:30 this year, there are other swimmers who have looked better this year that have great shots at finishing ahead of her in Indianapolis.

Ashley Twichell and Haley Anderson swam this event last year and made the final in Omaha, though Twichell’s 8:30 from January is one of the most impressive swims from an American this year (it ranks 4th in the country). Anderson hasn’t swum this race all year, and has only competed at one meet in the pool (Mesa PSS) since last summer. It’s hard to predict what we’ll see from open water specialists, and if they’re even going to race, but Twichell certainly has the hot hand.

Collegians Hannah Moore, G Ryan, Kaersten Meitz, and Megan Byrnes all rank in the top 10 for Americans this year. Moore was sixth at the Trials, while Meitz and Byrnes have been setting personal bests this spring. Moore (8:32) and Ryan (8:36) have been the quickest of the four, but Meitz and Byrnes have some intrigue. At a small meet in May, Meitz went a lifetime best by nearly four seconds after two years without improvement, going 8:37 for her first time under 8:40. After facing a year or so of stagnation, Byrnes has found her groove again and broke through with an 8:40 best time in May, beating a 2015 previous best like Meitz.

Ashley Neidigh sits right between soon-to-be college freshmen Sierra Schmidt (8:38) and Taylor Ault (8:41). Schmidt has been off her game, but we can’t forget that she has sub-8:30 potential. Ault is a few seconds off of her lifetime best, while Neidigh smashed nearly six seconds off of her lifetime best with her 8:41.57. Her old best, an 8:47, was done at Olympic Trials, and the fact that she’s already been six seconds ahead of that at a May meet says a lot, especially considering that her 8:47 was a lifetime best last summer. Neidigh won the SEC title in the 1650 (dropping more than 15 seconds from her best time) and dropped more time to place 8th in the mile at NCAAs, and she looks primed for another big swim in Indy.

Dark horse: Joy Field of Magnolia Aquatic Club. The Texas A&M commit has strangely only swum this event once this year, a pedestrian 9:03 from late April. It’s unclear why she hasn’t been very fast recently, but just last summer she went 8:31.21 for silver at the 2016 Jr Pan Pacs, and another swim like that could easily put her into the top 8. We’d be remiss to not mention Erica Sullivan here, too– she and Field have raced head-to-head many times, and while Sullivan hasn’t been very quick this season either (8:50), she had a great yards season and should be somewhere in the 8:30s (at least).

I would definitely put Erica Sullivan in that top 8. After how strong her short course season was (4:39/9:29/15:47) I would say her summer will be even better since she appears to be an even better long course swimmer. As well, with her dominance at OW nationals, I think that’s a testament of what’s to come!

Regarding Field, she is always ready when she needs to be ready. Wise selection for dark horse.

What are the prospects for the US to include a second woman at 15oom? It seems like someone other than Smith might be able to snag the second spot at that distance. Distance freestyle should get at least one swimmer who is not already qualified at 200m.

I wouldn’t say smith is untouchable in the 800, Ledecky no doubt, there could be a possible upset for the second spot

who would u see in second as a surprise ?

NAH — Smith’s not as far ahead of the field as Ledecky, that’s for sure, but there just isn’t someone who can tear past 8:25ish, or someone who has proven that consistently like Smith has. Also, her 8:23 from the Charlotte UltraSwim is really impressive, and it’s her fastest non-championship time ever.

He means that although Smith will probably get 2nd, it’s not a complete lock unlike Lesecky. She could add 20 seconds and still make it xD

Are you predicting a 8:09.2 for Ledecky because you don’t think she will taper for trials?

Jason– yes. Last summer she held up and didn’t take it to a full taper in Omaha, and while she still blew out the field, she proved in Rio that she was saving the best for when it mattered. She really doesn’t have to go much faster than her in-season times in the 400 to win in Indy, and the same goes for her 800.