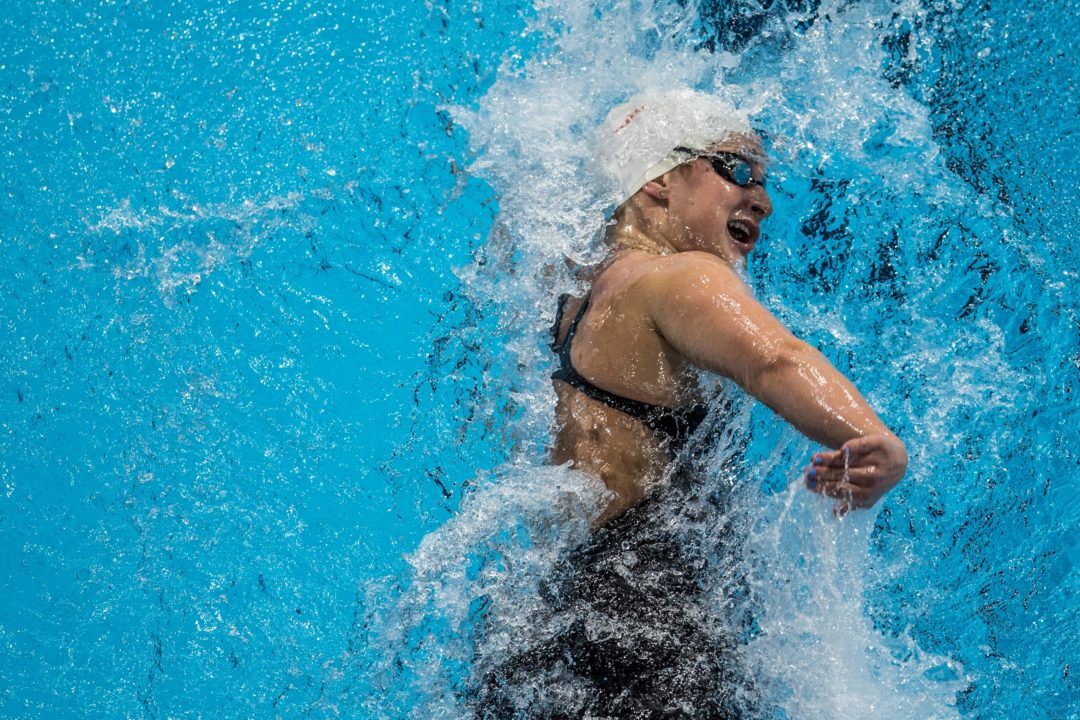 The gap between the rest of the field and Ledecky will likely be shortened by Leah Smith. She’s been the closest thing to Ledecky out of any American, and while she hasn’t swum this event in three years, she’s in great position to finish 2nd here. Her best time, from 2014 Summer Nationals, is a 16:27.37. She’s progressed significantly since ’14, of course, and it wouldn’t be surprising to see her smash through the 16:00 barrier. Some important times to keep in mind while Smith’s racing:

Meanwhile, the chase pack will be made up of a bunch of familiar names in the American distance swimming landscape.

With Ledecky comes a couple other Stanford rising sophomores in tow– Leah Stevens and Megan Byrnes continue to improve after making the move to Palo Alto, and both are in the 16:30’s. So are Sierra Schmidt and Chenoa Devine. Schmidt’s best time (16:12.84) is much faster than anyone besides Ledecky has ever been, but she hasn’t been able to come very close to it since. Meanwhile, the other three all went lifetime bests, in the same race, at the Santa Clara PSS. Recent Auburn graduate Ashley Neidigh won the SEC title in the yards version of this race, and she’s due for a big drop. Her personal best is a 16:53, and she dropped almost 17 seconds in the 1650 from 2016 to 2017– something in the 16:30’s wouldn’t be surprising.

It’s unclear whether or not open water stars Ashley Twichell and Haley Anderson will contest this event, or if they’ll even race in the pool this summer. If they choose to, then both have the chops to make the final, but it’s still up in the air so they won’t be in our top 8 predictions.

The thing is she goes even faster at big meets.

As only one swimmer in this event advances to Worlds, it would probably be smarter for Leah to not swim it and focus on the 400 and 800. She hasn’t swam it in years, so why waste valuable energy on it?

I think only the winner of the 1500 (for women, and 800 for men, as well as 50s of each non-freestyle stroke) makes the team, and the coaches add a second swimmer based on who has already made the team. So Ledecky was the obvious choice for the second spot for the 1500.

Well that was Pan PAC trials, so when you qualify in one event you can enter other events that you didn’t qualify for.

It is hard to find another so unversatile swimmer in terms of so sharp distribution of ranking around very high point of one event only.
The distribution curve is pretty much symmetrical and I think reflects some biological specifics of this swimmer. To expect her to be suddenly #3 at 1500 is unreasonable from my point of view.
To be fair I… Read more »

chase travis, the 14 year old from nations capital, could also have a major time drop. 16:44 this month in this event- untapered

I predict that female swimmers will start catching up to Ledecky in a few years. I don’t know if it will be enough that Ledecky will lose though. But in this event, the 1500, it may be her best event.

eliot kennedy, the 14 year old from waves bloomington, could also have a major time drop. 16:48 last summer in this event.

I think there will be a few surprises, not at the top of course. Also Leah Smith won’t be entered with a 1500 time (she hasn’t swum it since 2014), so she won’t be swimming with Ledecky, right?