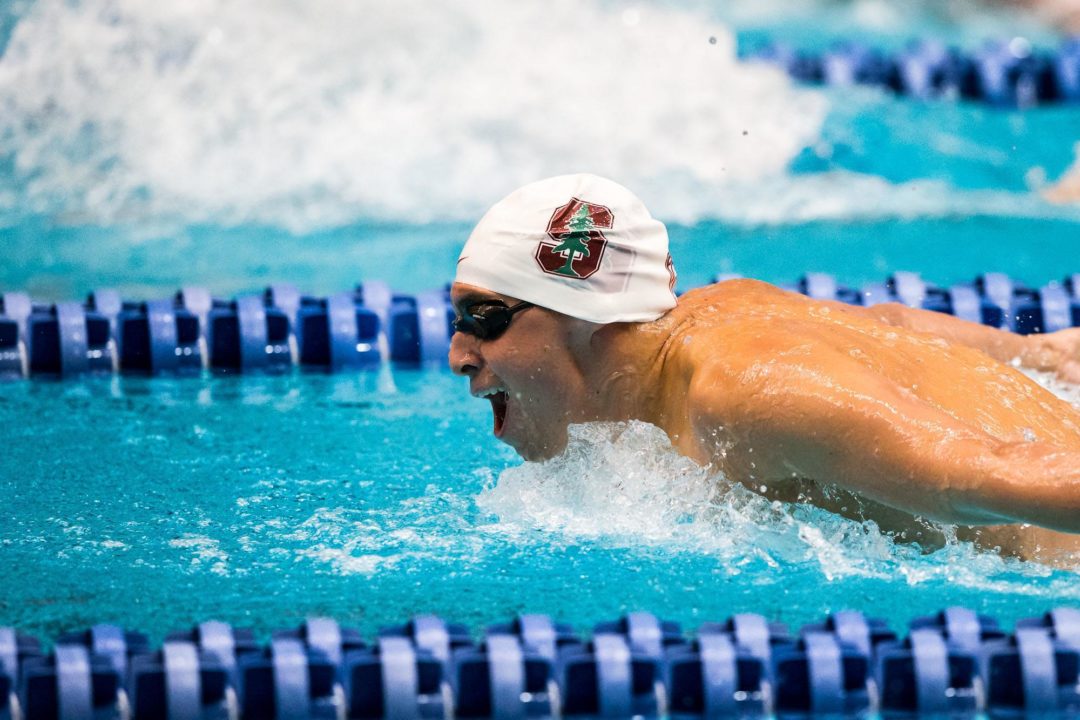 After a fast start to the meet last night in the 800 free relays and 200 medley relay time trials, Thursday morning marked the first preliminary session of the 2016 Texas Invite. This morning’s events included the 500 free, 200 IM, and 50 free.

Wisconsin’s Cierra Runge and Danielle Valley picked up the top 2 slots this morning with times of 4:38.84 and 4:40.20 respectively. Runge, who briefly held the NCAA Record during her freshman season at Cal, posted her fastest time since she made the move to Wisconsin, though this is likely the first time she’s rested at all for a yard meet since then. Her personal best is a 4:31.90, so we could see some very fast swimming from her in the final.

Arizona freshman Hannah Cox, who was a medalist at the Junior World Championships before starting in the NCAA, sits as the 3rd seed heading into finals with her 4:40.79. Cox has also been sub-4:40 with a personal best of 4:37.82, so she could also be in the title hunt tonight.

Another pair of freshman will be competing in the final tonight, including Cox’s Arizona teammate Kirsten Jacobsen, who took 4th this morning with a 4:42.59. Just behind her in 5th is Texas freshman Lauren Case at 4:43.21 for 5th seed.

The Stanford men were on fire in this morning’s 500 free prelims, taking 4 of the 8 spots for tonight’s championship final. Their fastest swimmer was All-American Liam Egan, who had the 2nd fastest time of the morning in 4:13.82. Their next 3 finalists were all freshmen, as True Sweetser dropped a personal best 4:14.15 for 3rd seed, followed by Grant Shoults (4:14.39). Their 4th man in was James Murphy, who cracked the 4:20 barrier for the first time, taking 8th in 4:18.55.

The Texas Longhorns put a pair of Olympic gold medalists in the 500 free final, with Clark Smith leading the way through prelims in a quick 4:12.83. His teammate Townley Haas, the reigning NCAA champion, made it back 7th after cruising to a 4:17.25. That time bodes well for Smith, as it’s several seconds faster than he was at last season’s NCAAs. Last season, he dropped a 4:08.8 in finals at this meet, so he could be poised for a big swim tonight. Of course, we can’t count out Haas, who has been 4:09.0 in this race.

Arizona distance standout Chris Wieser, an Olympic Trials finalist in the mile, swam a new personal best 4:16.07 to take 6th this morning. Also making it back was Wisconsin’s Matt Hutchins, who set himself up at 5th with a 4:15.03.

Texas’ Madisyn Cox wasn’t messing around in prelims this morning, clocking a new personal best to take top seed for finals in the 200 IM. Cox blasted a 1:53.89 to shave a couple tenths off her previous best 1:54.11 from 2016 NCAAs. She was almost 2.5 seconds ahead of anyone else this morning.

Arizona’s Nick Thorne, an Olympic Trials semifinalist in this race, was also in the 1:44-range to take 4th this morning. Texas’ Sam Stewart, a transfer from Auburn, will be representing the Longhorns in the final after clocking a 1:45.61 for 6th. Wisconsin also put a swimmer into the final, with Brett Pinfold sitting 5th at 1:45.50.

Texas senior Will Licon, the reigning NCAA champ in this race, scratched out of prelims. Licon has been absent from his typical events up to this point due to a groin injury that has kept him from swimming breaststroke.

There were 2 women under 22 this morning, led by Arizona’s Katrina Konopka, an Olympic Trials finalist in this event. Konopka cranked out a 21.97 to take the top seed headed into finals. Joining her in the top 8 were teammates Annie Ochitwa (22.31), who was fresh off a swim in the 200 IM), and Morgan Ginnis (22.52).

USC’s Anika Apostalon and UCLA’s Linnea Mack will both be title threats after making it back in the top 8. Both women are NCAA All-American sprinters. This morning, Mack was slightly faster, clocking a 22.16 or 3rd seed. Apostalon wound up 5th with her 22.23.

BYU’s Payton Sorenson clipped his best time in the 50 free this morning, taking the top seed with a speedy 19.22. That knocked a hundredth off his previous best from the American Short Course Championships lasr season.

The Longhorns picked up 3rd and 4th this morning with Jack Conger and Brett Ringgold. Both touched in the 19.4-range, but Conger was a touch faster with his 19.45 ahead of Ringgold’s 19.49. Notably, Texas’ Joseph Schooling took a DFS in the 50 free this morning, making him absent through the first 2 days of the meet unless he competes in the relays tonight.

USC’s powerhouse sprint duo of Dylan Carter and Santo Condorelli both landed in the top 8 this morning. Both swimmers are now back in competition for the Trojans after taking Olympic redshirts last season. Condorelli wound up in 5th with his 19.54, while Carter threw down a 19.62 for 6th.

Live results take you to a different meet. Anyone else having this issue?

Before the meet started, the link would lead to the Texas vs NC State results. It’s been working since then though.

I am sorry, but it still links to the NC State meet – at least it does for me.

It is working. Use google chrome, open the link in incognito mode.

Very odd. That doesn’t work either. Comes up with the NC State meet whether I use Google Chrome with or without incognito mode or Internet Explorer with or without private browsing. Oh well. There are other ways to get results.

Not a great morning for the USC women, especially their 500 freestylers. I’m guessing they haven’t rested much for this meet?

It is funny how some years, people on here say they are always fast and don’t drop at end and now they are tired and not rested at all. I don’t think Becca Mann will do much this year……as you can tell by her fall performances….that started this summer.