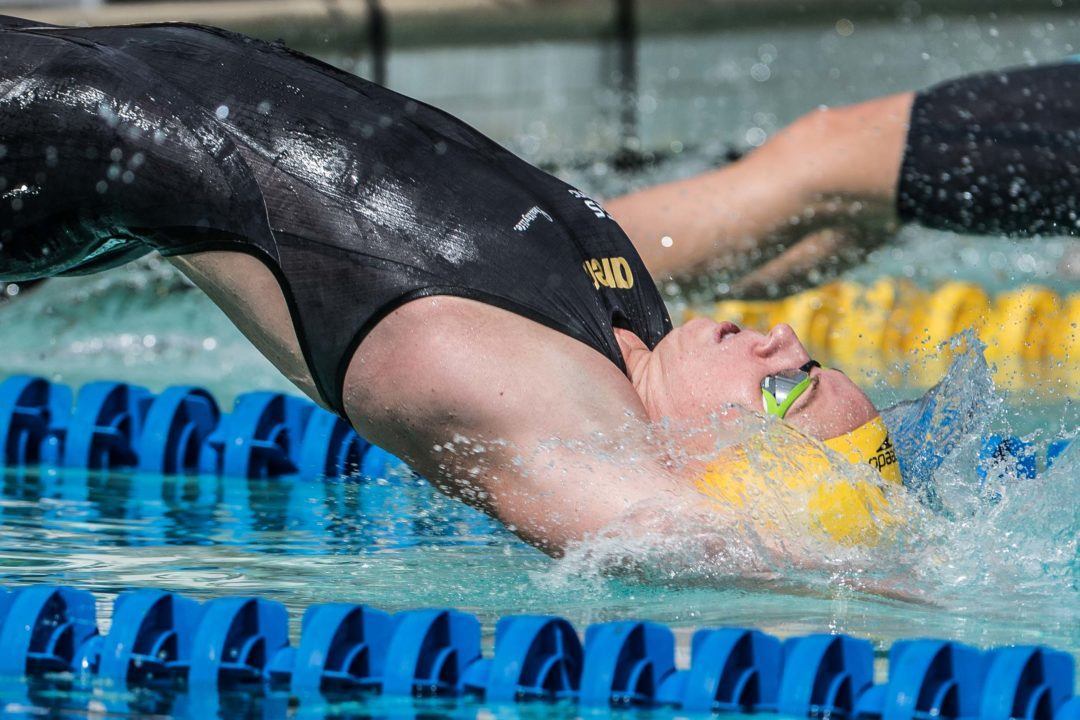 Emily Seebohm is the favorite to win the 100 back and grab the Olympic gold that she missed in 2012. Archive photo via Mike Lewis/Ola Vista Photography

In the summer of 2012, Australian backstroker Emily Seebohm was left in tears and disbelief as she was handed a defeat in the 100 back in London to America’s media darling Missy Franklin. Despite swimming faster than Franklin in semifinals, the 17-year-old from Colorado with the big smile charged ahead with an incredible final push towards the wall to leave Seebohm dumbfounded and without the gold medal in the final one night later.

2016 will be Seebohm’s time for redemption.

In a way, the Australian 24-year-old already got a taste of revenge over the last two summers. At the 2014 Pan Pac Champs, Seebohm earned a win over an injured Franklin in the 100 back. She bested Franklin again at the 2015 World Championships. There, she blasted a 58.26 in the final to claim gold and scare the suit-aided world record. Two lanes down, Franklin was looking up at her time of 59.40, over a second behind Seebohm and well out of medal contention in 5th.

Seebohm won’t even race Franklin in this event in Rio– Missy failed to qualify for Rio in the 100 back, paving Seebohm’s clear path to gold in August.

Seebohm has posted so many 58’s since last September that it seems as though she’s never off her game. Her consistency is impressive, and suggests that she can drop a 58-low (at the least) in Rio.

Mie Nielsen of Denmark and Katinka Hosszu are two names that immediately come to mind behind Seebohm. Nielson and Hosszu recently went head-to-head at the 2016 European Championships, where Nielsen was 58.73 to eke out the win and notch a new Danish record.

Hosszu was 58.94 at Euros, a shade slower than her 58.78 from prelims in Kazan (she scratched from semis for the 200 IM final) that broke the Hungarian record. Nielsen, in Kazan, earned bronze in this event.

The other medalist in this event in Kazan, earning silver, was Australian Madison Wilson. She swam a 58.75 to edge ahead of Nielsen’s 58.86 last summer. Nielsen, Hosszu, and Wilson are all capable of putting up 58.6-58.8 range swims, though the Iron Lady has a scheduling conflict. In Rio, she could have 200 free and 200 IM semifinals before and after the 100 back final. Hosszu, who is known to load up with monster schedules, could certainly swim all three races, but the 200 IM is her best event and that takes priority over the other two. We’ll assume she swims the 100 back, though, since she has an infinitely better shot at a medal in that than in the 200 free.

Though Franklin won’t be back to defend her Olympic gold in this event, the NCAA has helped produce two 59-lows from UGA’s Olivia Smoliga and Cal’s Kathleen Baker to spur on the Americans this summer.

Baker was 8th in the final in Kazan with a 59-high, but improved through each round at the U.S. Olympic Trials in Omaha to end up 2nd with a new best of 59.29. After a best time in early June, Smoliga dropped a quick 59.02 to win the event in Omaha. It’s probably going to take a 58.8 (or faster) to medal, but a big drop from either American could shoot them into medal contention.

Another name on the brink of venturing into 58-second territory is Canada’s Kylie Masse. With a 59.06 to win the 100 back at the Canadian Trials, she broke the national record and, like the American girls, could put her name in for Olympic medal contention with another big swim in Rio.

China’s Haihua Chen won this event at the Chinese National Championships back in early April, posting a 59.55 to punch her ticket to Rio. She’ll battle with GBR’s Georgia Davies, among others, for one of the last spots in this final. Haihua’s Chinese teammate Fu Yuanhui may or may not be in the hunt as well – she won the 50 back at Worlds last summer and went 59.0 in the 100 back final. But she hasn’t been under a minute yet this year, and it’s not clear if she’s even on the Chinese Olympic roster. If she is – and she’s in good form – she’ll be a finals threat. But those may be two big ifs.

Ok 57.9 for Seebohm is a bit ridiculous. Nothing against her I hope she gets the world record but if anything she’ll get it by .05 or less. And let’s be real here Hosszu is going to scratch the 100 back we all know it

Hosszu will swim the 100 back. Of course she will. 200 IM semifinals are the last event of the session, and she can probably coast into finals going 3-4 seconds off her best.

If she scratches anything, I expect it will be the 200 free, where she’s good but not as good as that event’s depth

How do you know that 200IM semi is last in the session? Is there schedule already?

The Olympics schedule was fixed and known years ago. This is the Olympics we are talking about, not some small local meet.

Predictions should be realistic, but by no means do they have to be safe!

Hope Smoliga or Baker will surprise and get medal

Do we have any idea what’s Hosszu’s schedule is going to look like? She’s the presumptive favorite in three other events…what’re the odds she doesn’t swim this?

The Hungarian Swimming Association only stated, that she will enter 5 individual events and 1 relay. Nevertheless with the rest of the roster confirmed, it is easy to guess, that she will compete in both IMs, both backstrokes and the 200m butterfly.
What is certain that she won’t be in the 200 free as Evelyn Verrasztó and Ajna Késely swimming that event.

200 fly pure waste of energy for Hosszu. Both IMs and both backs are well enough.

Oh c’mon, for Hosszu, 200 fly is just a warm up or warm down depending on the schedule.

200 fly semi will only be about 20 minutes before the 200 IM final. I have a feeling she will want to focus on winning that IM…she’s never won a gold medal before and she’s hungry for it. If she already has the 400 I’M gold, she might not scratch

Why would her Olympic program be any different to any of her other previous major competition , she swims alot of races cant see her changing that

Who was only 18 completely different case

Well yeah, but could be a good reason why she might want to pare down her events.

Though it is part of a bigger debate – is it better to come away with a bunch of medals of varying color or a few golds? Valid arguments on both sides.

Hosszu will already have won one gold by the time she swim 100 back prelims.

Si. But then you’ve got the 100 back running into the 2 IM which runs into the 2 fly. She ain’t dropping either IM and I assume she’s more likely to swim the 100 back over 2 fly. But I haven’t really paid much attention until right now, tbh.

Three other events? What besides the 2 IM events

I was wondering too. She should win gold in 200IM and 400IM but i cant see third.

Yeah, I kinda over-valued her 2 back. (I do not pay enough attention to the 200m distances.)

Still more likely to medal there than the 100 back, just ain’t a favorite like I said.