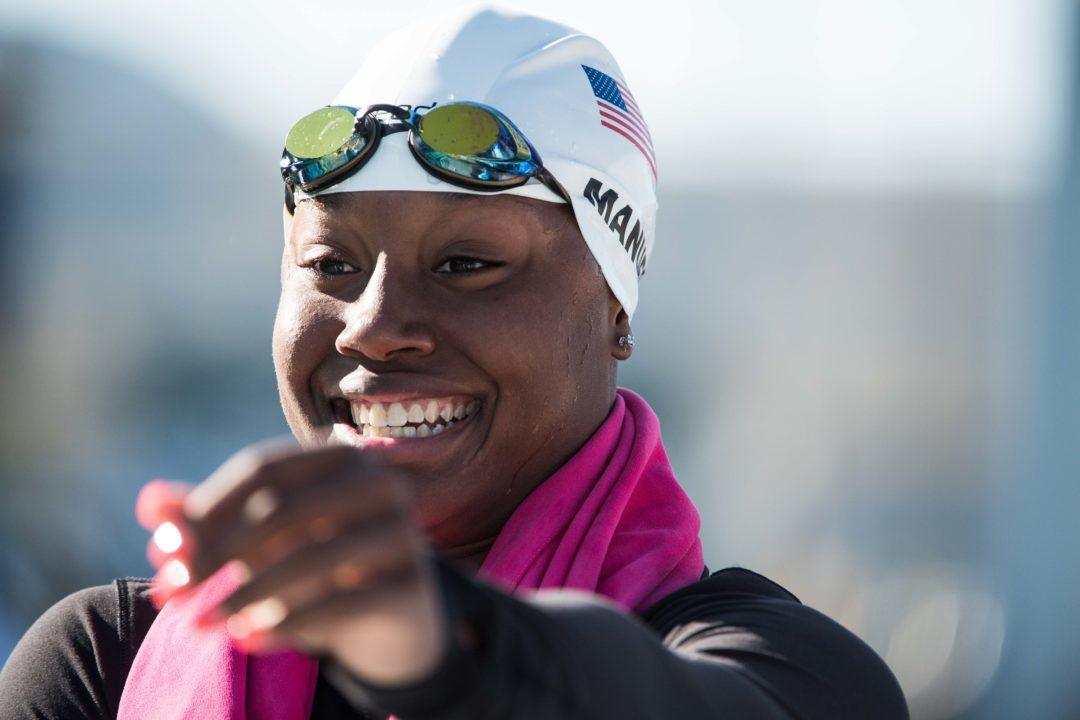 On the final night of competition at the 2016 Ohio State Invitational, Stanford freshman Katie Ledecky went out with a bang. Ledecky set a new NCAA and American Record for the 2nd time this weekend, winning the 1650 by a full minute with her 15:03.92. She also broke the NCAA and American Records in the 500 free on Friday night, and the NCAA Record in the 1000 free last week, so she owns the NCAA Records across the board in the distance free races.

All-American and NCAA Champion Ella Eastin, a Cardinal sophomore, had a strong showing in the women’s 200 fly. Eastin raced to a 1:52.62 in that event to grab her 3rd win of the weekend, beating the rest of the field by over 4 seconds.

Defending NCAA Champion Danielle Galyer took to the pool in tonight’s 200 back final, but she wasn’t the fastest Wildcat in the water this time. While Stanford’s Janet Hu won the race in a blazing 1:50.69, Kentucky freshman Asia Seidt also turned heads with her 1:51.18 for 2nd place. Galyer followed for 3rd in 1:52.21.

A pair of Kentucky swimmers brought home wins for their team on the men’s side. Drew Aviotti kicked things off in the 1650 free, racing to a 14:58.50 victory ahead of Ohio State’s Brayden Seal (15:00.32). Later in the session, Kyle Higgins gave the Wildcats another victory with his dominant 1:42.66 in the 200 fly.

Ehh misy franklin took out a 200 free about that fast not too long ago. No biggy

Records or times in 25 “YARDS” pools means almost nothing for the rest of the world.

Ruben, I’m French and I’ve learned to understand the bathtub records. Of course it’s a different sport than LCM but it’s fun to watch. It’s not always the same swimmers who dominate in both pools but often it’s the case. And with Simone and KL it’s the case. And 99% of US stars who have destroyed the competition at the last 2 olympic games swim or have swum in college. I keep one percent for MP. 🙂 Rookery, your very welcoming comment is exactly what the rest of the world hates about a certain part of America. It’s not even arrogance at that point. It’s just intolerance coming from a lack of education. Close your country to the outside world… Read more »

Bobo, I ususally love your comments, but can we keep politics and your unwarranted accusations that come with discussing the recent US election seperate from swimming? From an American perspective, it’s a bit annoying to see all these “Oh but SCY doesn’t matter” when we’re obviously doing something right. We had a fantastic performance this summer, and whether that comes down to the ability to race really well in high pressure situations, SCY’s emphasis on starts/turns/finishes, or the American style of training is a debate for another time. Whatever we’re doing, it’s working and I guarantee you we aren’t going to be changing our system anytime soon.

It’s funny, our roles have switched here. I am usually indifferent to Bobo’s comments, at best, and there have been times when he’s gone on actual political rants, but I find the comment in question to be fair. See, it seems to me that Bobo was defending the SCY format here and acknowledging that it clearly does prepare us for international competition (“99% of US stars who have destroyed the competition at the last 2 olympic games swim or have swum in college”). As for his critique of Rookery, while making assumptions about who he supported for the election is dipping a toe into political waters, the assertion that comments like Rookery’s give Americans a bad image is a totally… Read more »

Well I was hoping for the hot euro babe contest between Carla Bruni & Melania but with Sarkozy out – not gonna happen . Still not bad for 40 + years old women . Girls if you can’t be SWIM CHAMPS – they give us hope .Ok in our dreams !

Agree with SVEN – I think Bobo has “come around” 😛 to appreciate what college swimming and yard swimming has been and can do for swimmers in USA to produce result at the last two Olypmic. Glad to see this comment from him.

And agree that the jab with election is unnecessary especially we really can’t tell much of Rookery from one comment. Rookery may just said that in response to the original post being kind of rude (which Ruben Arevalo Galindo at least get to the comment section to make that comment despite how irrelevant yard swimming is to him/her).

@bobo gigi: The only thing that is clear in your comment is that a Frenchman who consideres himself “educated and tolerant” doesn’t like English word “yard”. Same old story. Nothing new. As “educated” Frenchman you should understand that there is no preferences in how to measure human abilities of moving in the water. It can be 50m pool environment; it can be 22.5m pool, It can be 66.66666m pool. Whatever. It doesn’t matter. Same can be said about distances at which swimmers compete. Why should they be the same that are used to measure human’s running abilities: 100,200,400,800 etc. Completely different environments. Somebody long time ago decided that it will be cool and started to build pools of corresponding size.… Read more »

But these are the same people that smoked the world in LCM over the summer.