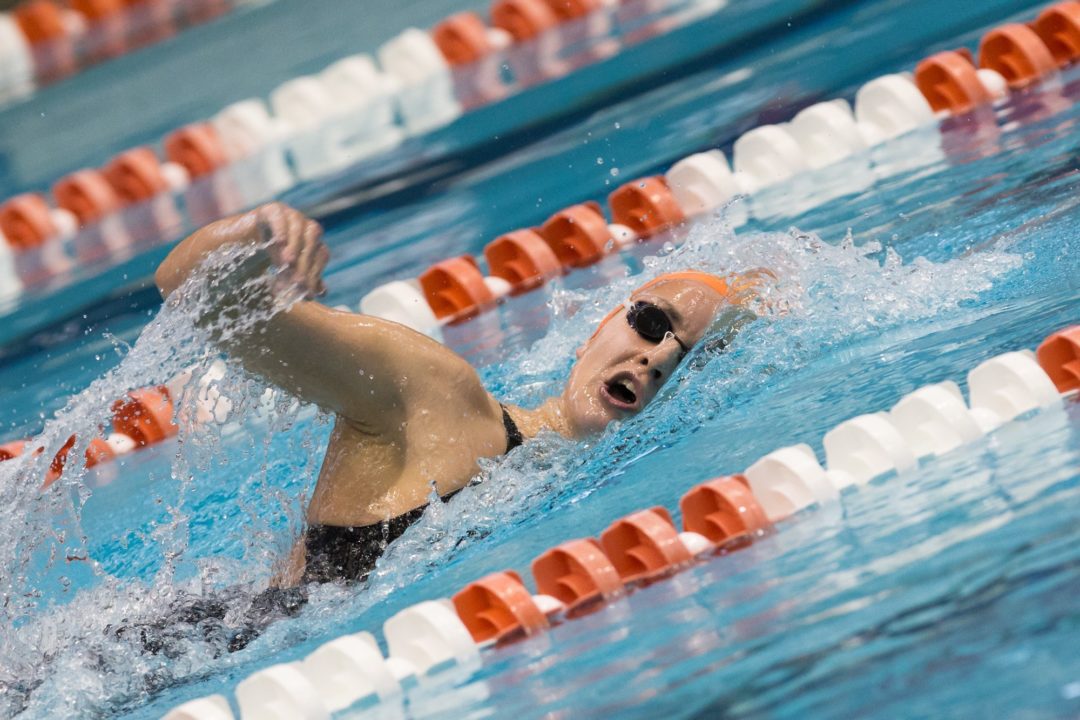 Queens' Patricia Castro-Ortega won 4 NCAA titles and broke 4 NCAA Records individually last year, but we still might see her tweak her lineup for this year's meet.

The pre-selection psych sheets for the 2016 NCAA Division II Swimming & Diving Championships have been released, and while these sheets do not guarantee anyone’s qualification to the NCAA Championships, they do serve a function of giving an idea of where top swimmers are entering for the meet.

Actual meet invites are much tighter in Division II than in any other division, in part because swimmers are allowed to race 4 individual events as compared to the 3-race maximum in Division I and Division III. Last year, the men’s cut line fell at either 14 or 15 per event, and the women’s cut line was at 16 or 17 per event.

Note that some swimmers, including some of the best in the country from the defending champions at Queens University, are over-entered and will have to reduce their load to 4 individual races before the meet starts.

What is the point of D2 A qualifying times if only about 3 to 4 swimmers qualify for the A times. The splits between the B time swimmers is so close I don’t think it is fair the way the NCAA does the invites.

There is nothing fair about the way NCAA Div 2 swimming does the invites. It is so flawed, its not even funny.

Another D2 Mom, that’s likely how they would do it, if there were no limits on deck space and money.

D1 has a women’s only and a men’s only meet. More women can be invited. D2 is combined men/women. The format is also different.

D3 is combined, but in a different format. D2 allows 4 individual events and 7 total events over a 4 day prelims/finals format.

The formal complaint you are looking to make has been made over and over again by D2 coaches for years, especially on the men’s… Read more »

“West Florida’s Theresa Michalak, a former University of Florida Gator, is the top seed in the 100 IM,”

Yes she is and darn good one too.

Good question. Why the inconsistency between D1 & 3 vs D2? The frustrating part for relays when the invite line is drawn at 9 (for men), you see ad hoc relays thrown together at NCAA’s that achieve All-American Honorable Mention status that are slower than the relays that do not get invited. I’ve heard of some schools throwing a diver on a free relay to score points, which is kind of a slap in the face to the #10 team that is left home. Not really a true national meet when relay participants are allowed to compete when they technically haven’t earned the spot. Just my thoughts.

The only way I was able to compete at this meet last year was by relay invitation and our relay barely squeezed in for All-American honors. I did make my way up to 9th in the 100 free, so stranger things have happened. Honestly, it wouldn’t surprise me that schools organize relays with bogus athletes, however, JP is correct, DII by choice has an unique schedule and lineup. The larger number of women in the meet is represented by the fact there are more women’s only teams because of Title IX. West Florida is a prime example.

Divers are not and CAN NOT swim on relays.

Not only that, but relay only swimmers that get invited because their relay made it takes away from the total male/female swimmer count….

So youre telling me, that if someone gets carried to NCAA’s via a relay qualification they take away a spot from someone who was 1 spot below the cut off in an individual event?!?! COME ON… that is ridiculous.

Disclaimer: this is what I understand of the qualification process, if I am incorrect, please let me know.

and why is it not consistent with D1 and D3 with the 3 race maximum so that more swimmers have the chance of an invite?
I read on this website, I think, that the NCAA voted down a request to increase the number of men invited just this academic year….
do they take more women because there are more women’s programs?

With all things being “equal”, why do more women get invited to NCAA’s than men?

It is because the NCAA has to equal out men and women throughout all their athletics. Certain sports (like football) only have male teams and so swimming and track and field (for example) need to take more women in order to balance that out.

Are you sure Castro Ortega is entered in the 200 free? Her name does not appear on the list for the 200 free? Does anybody have any projections on where the invite line will fall?