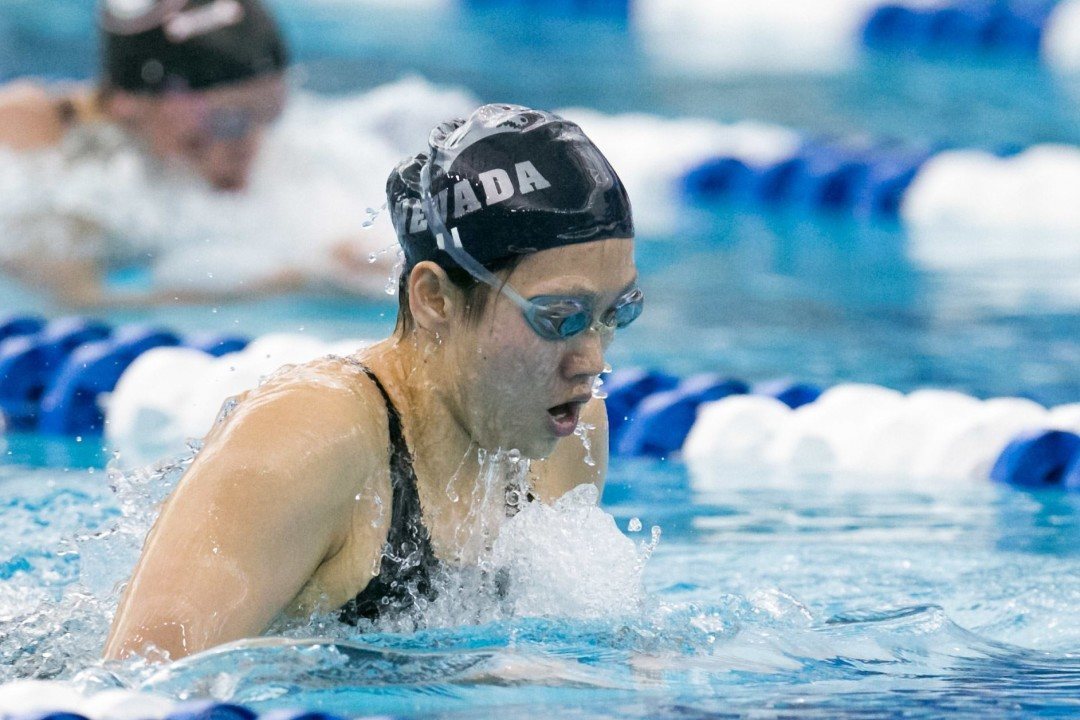 This meet has been a back and forth battle between Nevada and Boise State all weekend. Defending champion San Diego State could never recapture enough momentum to win again. While Nevada led after two days, the tide turned back to Boise State a day ago.

Once again, diving made a huge difference for Nevada and was perhaps the biggest factor in their first ever Mountain West Conference championship.

Genevieve Miller had already set a conference record in the 500 freestyle. Today she backed that performance up with another record. The swim also puts her in contention for NCAA qualification.

In the conference battle, Boise State actually had four swimmers in the top 16 to build their advantage over Nevada.

With Morgan McMormick’s eligibility finished, this meet was ripe for some new blood. Freshmen Ugne Mazutaityte seized the day, coming from behind to beat 100 bacsktroke champion Samantha Wicks.

While Boise State had two of the top three, Nevada was able to stem the bleeding with two finalists of their own.

Michelle Troup of UNLV won an incredibly tight three way race of the title. Just .05 separated the top three at the 50, and the same margin held for the final result. Boise State once again scored two finalists.

Yawen Li was able to defend her conference title. Like the 400 IM, she was well short of her own league record in doing so. 100 breaststroke winner Maria Harutjunjan tried to stick with Li but couldn’t do so past the 100 mark.

Nevada turned the corner in the team race, with three out of the top five.

Picking up on their momentum from the breaststroke, Nevada scored two more medalists in this race. Sita Kusserow touched first, although she was well short of any conference or meet marks.

Earlier in the weekend, freshmen Sharae Zeng had won two victories over teammate and 2015 Diver of the Meet Krysta Palmer. On platform, Palmer dominated. Her win was huge for Nevada in the team race, as the Wolfpack took 2nd, 5th and 10th in this event as well.

Although Boise State came up short in the team race, they kept their heads up to finish the meet with a league record. Notably, both Brittany Aoyama and Emma Chard swam significantly faster than their individual swims.

Nevada swam a clean second place, clinching the win and their first ever conference title.

Congrats to Nevada and Boise State. It would be interesting to see how good Boise State could be with any kind of aquatic facility, in particular the divers. Hard to recruit divers with that pool.

Brilliant Championships well done Team Nevada, incredible job by the Divers its true to say but this is a Swim and Dive competition – Great Job Neil Harper – Genius

Great job by Coach Harper in his 1st year at Nevada.

I wouldn’t call it genius. I would call it someone who will do anything to win. Bringing in foreign divers for a semester to score a bunch of points for your conference meet and depriving swimmers or for that matter divers on your team from participating in a scoring position shows a poor taste of character. But Nevada did win the meet though! How many NCAA cuts did they achieve over the weekend?

MW Swim, don’t be such a sore loser. A lot of us BSU families were surprised to get caught and passed on the last 3 events of the last day, but it was clear to see that Nevada wasn’t going away after the 400 MR DQ. Of course we wanted our girls to win, but UNR brought enough swimmers and divers to score the points needed to win. They had enough scholarship available to bring in foreign athletes in January and there aren’t any American athletes available at mid-year. Today BSU had 12 swimmers and divers named to the All-MW Conference Team, same as San Diego State (last years champions) – Nevada to their credit had 16 named to the… Read more »