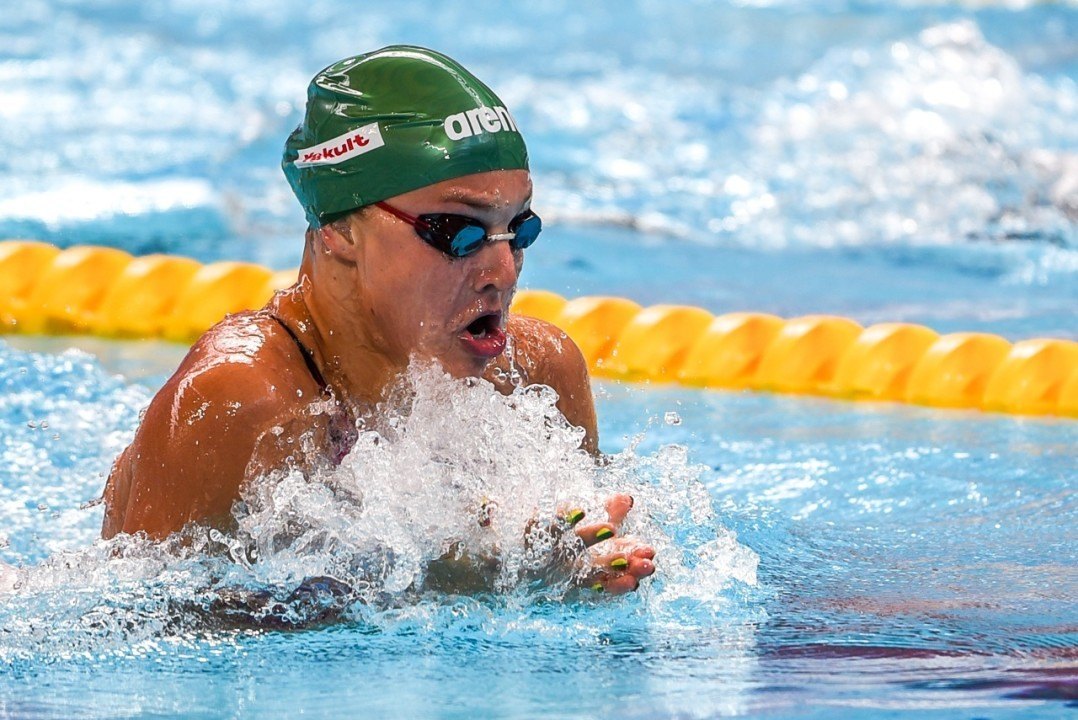 In an incredible display of pacing, Italy’s Gregorio Paltrinieri successfully defended his European Championships title in the men’s 1500m freestyle in spades. Out-splitting his previous European Record of 14:39.67 set in 2015 right from the beginning, Paltrinieri was actually beneath Chinese swimmer Sun Yang’s world record pace before falling off with about 300m left to go.

Charging down the pool to lead wire-to-wire, Paltrinieri scorched the competition, which included his teammate, the 400m freestyle champion from earlier in this meet Gabriele Detti, who touched almost 14 seconds behind to snag his 2nd silver (14:48.75).

Rounding out the top 3 was Mykhaylo Romanchuk giving the Ukrainian squad some more hardware with is bronze medal-garnering time of 14:50.33. That blasts a new Ukrainian National Record, laying waste to the 14:57.82 Romanchuk threw down last summer at the FINA World Championships.

For Paltrinieri, his outing in London tonight checks in as the 2nd-fastest performance of all time, sitting 2nd only to Sun Yang’s record of 14:31.02. He now sits atop the world rankings throne, overtaking the previous owner Mack Horton (AUS) by a wide margin. Look for a full split break-down in a separate post.

On a roll from his silver medal last night in the men’s 100m breaststroke event, British swimmer Ross Murdoch led today’s charge in the longer distance. Clocking a time of 2:09.72, defending silver medalist in this 200m breaststroke race Murdoch earned a mark within his own personal top 10 best this evening, which is a good sign considering the reigning World Champion is right on his heels.

Germany’s Marco Koch, who won the world title in a time of 2:07.76 last summer in Kazan, played it cool tonight in this semi-final, registering a time of 2:09.82. Right behind him is Finish athlete Matti Mattsson in 2:10.10, a man who has experience in this event having won bronze at the 2013 World Championships.

Reigning World Champion and world record holder in this event, Katinka Hosszu, eased into the top spot headed into tomorrow night’s final. The “Iron Lady” from Hungary clocked a smooth 2:08.60 to submit the only sub-2:10 time of the field and nab her 4th best result of 2016. Hosszu currently sits atop the world ranking in this event with the swift 2:07.69 she scored at Marseilles.

Fighting perhaps for silver tomorrow night will be two Brits, led by World Championship bronze medalist in this event, Siobhan-Marie O’Connor. 2:10.17 is what the 20-year old produced this morning to land the lane next to Hosszu, who will also be flanked by 2016 European Championships silver medalist in the 400m IM Hannah Miley (2:12.39).

Hungary could potentially make it a 1-2 finish, however, as Evelyn Verraszto is in the mix, sitting in the 4th spot with a time of 2:12.93. Of note, Swiss swimmer Maria Ugolkova looks to have unofficially notched a new Swiss National Record with her evening effort of 2:13.34.

Although slower than his 1:45.87 time from semi’s last night, Dutchman Sebastiaan Verschuren secured his first individual major title tonight with a gold in the 200m freestyle. Clocking 1:46.02, he led a group of 4 men who dipped beneath the 1:47-second threshold, with tonight’s outing representing Verschuren’s 4th fastest of his career.

Verschuren actually sat in the back seat to both silver medalist Velimir Stjepanovic (SRB) and Finnish swimmer Matias Koski for the first 100, with each of the latter 2 competitors fielding quicker opening splits. Verschuren opened with 51.33 to Stjepanovic’s 50.77 and Koski’s 51.31. But, only 27-year old Verschuren was able to hang on for the back half, bringing his race home in 54.69 for the win.

Stjepanovic wrapped up his race with a 2nd split of 55.49, while Britain’s James Guy, the reigning World Champion in this event, surged a tad in the back half to snag 3rd in a total time of 1:46.42.

Overall, the race was on the sluggish side for a major international competition, but, again, it’s a sign of the time in light of the fact we’re less than 90 days out from Rio. Verschuren has already been faster this year with the 1:45.87 he notched at the Luxembourg Euro meet, as was Stjepanovic who earned a time of 1:46.04 at that same competition.

Guy already has a 1:45.19 time to his credit, earned en route to becoming British National Champion at the trials in April

World Championship silver medalist Ruta Meilutyte of Lithuania was able to snag gold here in London tonight, winning the women’s 100m breaststroke event by just about a half a second. 1:06.17 is what the 19-year old threw down from lane 4 to top the podium, just .01 of a second slower than her 1:06.16 outing from last night’s semi-finals.

The Plymouth Leander-trained gold medalist from 2012 was already a 1:05.82 from the Edinburgh International meet in March, but this time would still rank in the world’s top 10.

Making history tonight was Icelandic swimmer Hrafnhildu Luthersdottir, who became her nation’s first Long Course European Championship medalist by earning silver this evening. Luthersdottir nailed down a time of 1:06.45 to join Meilutyte on the podium as only the 2nd swimmer of the field to crank out a sub-1:07-second time. Tonight’s outing was even quicker than the 1:07.10 Luthersdottir raced to in Kazan for an overall 6th place at the 2015 FINA World Championships.

Proving once again that old-man speed never goes out of style, 31-year old World Champion Laszlo Cseh is well on his way to earning his 21st European Championships medal. Producing his 2nd 1:54-second time of the day after already having clocked a morning swim of 1:54.51, Cseh scored an even swifter mark of 1:54.29 to comfortably lead the men’s 200m butterfly field tonight. That represents Cseh’s fastest time of the season and now checks in as the 3rd-swiftest time in the world.

In a good position to defend his title, however, is Danish swimmer Viktor Bromer. Improving on his 1:56.67 morning swim, Bromer fired off a mighty 1:55.28 to sit right behind Cseh headed into tomorrow night. His race tonight sits among the Dane’s personal best 10 times and also positions Bromer as the 5th-fastest in the world right now.

Hungary could potentially make it a double podium finish if Tamas Kenderesi and hold on to or improve upon his 3rd seed, while Polish World Championship bronze medalist Jan Switkowski is lurking as the 4th seed, ready to pounce tomorrow night.

In a time that would have earned bronze at the 2015 World Championships, Swedish speedster Sarah Sjostrom picked up her 2nd gold in London, winning the women’s 100m freestyle in a field-crushing 52.82. Sjostrom threw down the only sub-53 of the competitors to nab her 2nd-fastest time of the season and the 5th-fastest time in the world. The double World Champion already has an impressive outing of 52.78 in this event from the Swedish Open last month.

The fact that the 22-year old is this fast reportedly unrested should send shivers down the spines of would-be 100m freestyle competitors around the world. Also reportedly unrested is the 2012 Olympic champion in this event, Dutch woman Ranomi Kromowidjojo. Blasting off the blocks in what most consider to be the best start in the business, Kromowidjojo wrangled in a time of 53.24 for silver, just off her season-best of 53.21.

Joining her Dutch teammate on the podium is Femke Heemskerk who led the finalists with her 54.15 from semi’s yesterday. The 5th place finisher in Kazan was able to improve upon that time, rocking a 53.72 for bronze tonight. She and Kromowidjojo are the two most threatening components of the Dutch 4×100 freestyle relay that will contend for gold in Rio.

Although the top 3 finishers all scored a piece of history, the men’s 200m IM overall was not memorable in terms of times at the London Aquatic Centre. The rest of the world, primarily the U.S. and Japan, frequently have swimmers scoring these types of times during in-season meets and, without Laszlo Cseh in this mix as he dropped out of the semi, the title was really up for grabs by any one of the competitors.

Taking full advantage of Cseh’s absence was Grecian swimmer Andreas Vazaios who became only the 2nd Greek swimmer to ever earn gold at a long course European Championships. Vazaios clocked a time of 1:58.18 for the win, improving upon his 1:58.47 time from yesterday’s semi.

Earning Israel’s first-ever long course European Championships medal of any color, Gal Nevo nabbed silver with his time of 1:59.69, bumping him up from 4th out of semi’s to 2nd place tonight.

And rounding out the top 3 is Alexis Santos of Portugal, competing in his first international final. Santos registered a time of 1:59.76 for bronze tonight and just the 3rd swimmer of the field to crack the 2-minute mark.

Mie Nielsen turned heads again, lowering the meet record she set just this morning. Nielsen turned in a time of 59.26 in prelims, but knocked off a tenth to score a new championship record tonight in 59.16. That ties her season-best, which she registered at the Edinburgh International Meet in March.

British youngster Kathleen Dawson rocked a new Scottish National Record by way of dipping beneath the minute mark tonight. After already setting a new record this morning in 1:00.60, Dawson became the first Scottish female swimmer to break a minute in this event. Her performance ranks the 18-year old just outside the world’s top 10.

Ever-present Katinka Hosszu, who has already claimed golds in the women’s 200m backstroke and 400m IM sits as the 3rd-fastest swimmer headed into tomorrow’s final. Remember, Hosszu is coming off her 200 IM semi double, as she will tomorrow night as well, so we’ll see how much the Iron Lady has left in her tank to rival Nielsen and Dawson.

Two of the three swimmers from the men’s 100m backstroke podium appear in the top 3 headed into tomorrow night’s 50m backstroke final. France’s Camille Lacourt appears to be the man to beat with his 24.79 time, but in a race as whirlwind and frenzied as this, anything can happen.

Polish swimmer Tomasz Polewka, the European SC Champion in this event, sits right behind Lacourt in 24.87, while Romania’s Robert Glinta looks primed to seek some redemption from his 100m backstroke performance where he led through prelims and semi’s only to miss the podium in the final.

Two Israeli swimmers also made the top 8 in the form of Guy Barnea and Jonatan Kopelev who touched in times of 25.09 and 25.20, respectively.

Only 53 thumbs down so far – the guy who keeps hitting the down button must be getting sleepy.

I am very excited to watch him swimming at NC STATE next year!

Nielsen could really be the spoiler come Rio – If she can sneak under 59s here, it’ll get her rivals’ ears pricked. Nice big PB from 18 year old Dawson in 59.8, too.