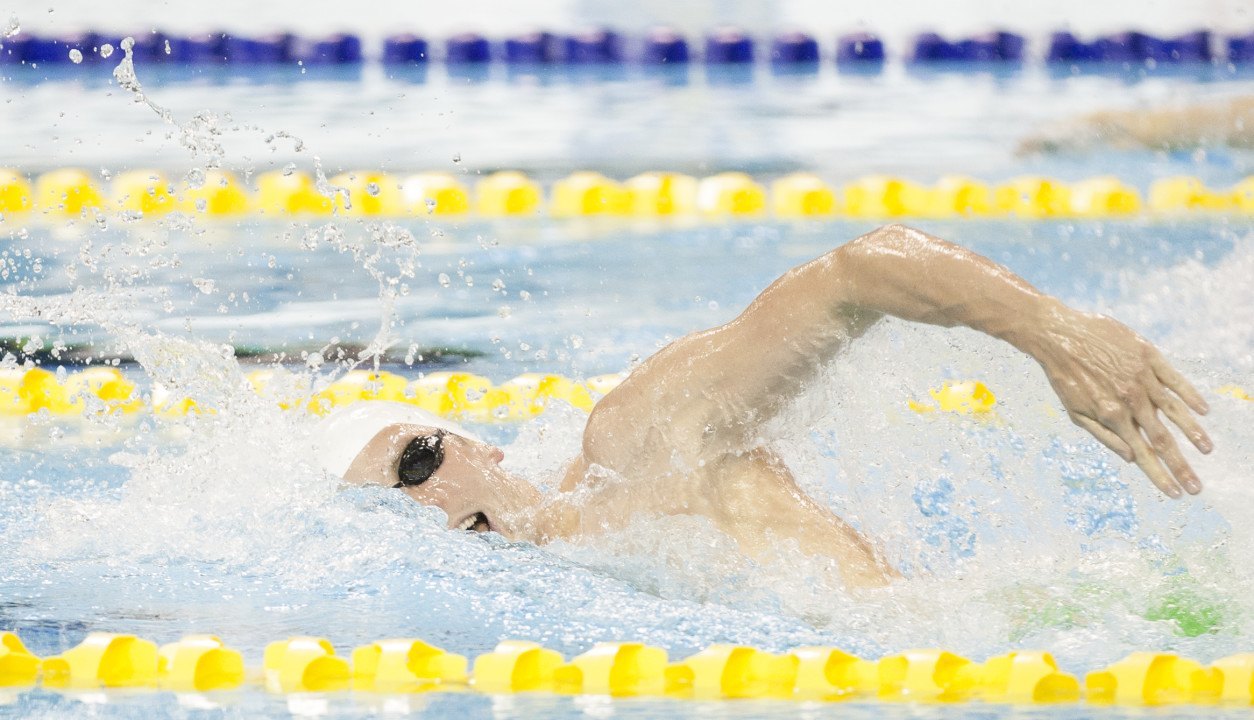 Ryan Cochrane will look to qualify for the Olympics in the 1500 free for the third straight Games tonight. Current photo via Chris Tanouye

The final night of swimming is upon as at the Canadian Olympic Trials, with plenty of exciting swims scheduled for tonight. On the men’s side we’ll see the 50 free, 200 IM and 1500 free, with a few opportunities for new swimmers to qualify or the team. Santo Condorelli and Ryan Cochrane are the two favorites in the freestyle events and have already qualified, but there’s a good chance they can get two swimmers qualified in both these races if the others can step up. Karl Krug and Kier Maitland are favored for the runner-up positions. The 200 IM will be wide open, and whether or not someone qualifies for the team remains to be seen as no one was within two and a half seconds this morning.

It would be a shock on the women’s side if two women didn’t qualify in both the 50 free and 200 back, as both events have at least three women capable in each of getting under the standard. Hilary Caldwell will likely be the only new qualifier on the women’s side. The men’s medley relay will close off the session looking to improve their ranking in the event in hopes of qualifying for the Olympics.

As expected national record holder Chantal Van Landeghem touched first to claim the win in the 50 freestyle, going 24.63. She was just off her national record of 24.39, but was well under the qualifying standard of 25.28. Her High Performance Ontario teammate Michelle Williams finished 2nd in 24.82, also qualifying her for the Olympics. Both had already qualified in the 100 free for Van Landeghem and the 4×100 relay for Williams.

Finishing 3rd was Sandrine Mainville in 25.04, also under the standard but unable to earn a berth in this event as she didn’t finish in the top-2. Like Williams, Mainville has qualified in the 4×100 free relay. Leah Troskot finished 4th in 25.59, and Riki Bonnema was 5th in 25.63.

He wasn’t favored to finish in the top two in this event, but Yuri Kisil pulled out the win at the finish in a new best time of 22.23, taking off a considerable amount from his previous best time of 22.52. Santo Condorelli appeared to have the win locked up, but Kisil’s reach got him at the touch. Condorelli finished a close 2nd in 22.25, as they both qualify in this event for the Olympics sneaking under the 22.27 standard.

Simonas Bilis clocked the top time in the B-final in a quick 22.10, just ahead of Dylan Carter (22.64) and Derek Toomey (22.67). Bilis represents Lithuania in international competition, while Carter represents Trinidad and Tobago and Toomey the United States. Bilis’ time is the 10th fastest in the world this year.

In a race where we saw four different women get under the FINA-A standard it was Canadian record holder Hilary Caldwell touching 1st in 2:07.96, elevating her into 4th in the world. Caldwell makes the team after missing out in the 100m. Runner-up Dominique Bouchard touched in 2:08.52 to clinch her second individual event for the Olympics, just off her PB of 2:08.16. Bouchard moves into 7th in the world. Both will be threats to final at the Olympics.

NCAA bronze medalist Kennedy Goss closed incredibly fast on the final 50 to pull into 3rd in a big best time of 2:09.64. She passed 100m back winner Kylie Masse in the final 15m, as Masse settles for 4th in 2:09.71, one one-hundredth off her personal best time. This event is proving to be one of Canada’s most competitive.

Two-time Olympic medalist in this event Ryan Cochrane qualified for the 1500 freestyle at the Olympics for the third straight time, going 15:00.75 to finish 1st. He wasn’t quite as fast as he’d like to be, but Cochrane has historically swam much faster later in the summer than he does in April. His time ranks him 7th in the world. He’ll look to challenge distance stars Gregorio Paltrinieri, Connor Jaeger, and Sun Yang at the Olympics this summer.

Canada didn’t finish in the top-12 at the World Championships- they were 13th, so they didn’t earn an automatic qualification in the 400 medley relay. Their time from the Pan Ams (3:34.40) currently sits as the top time among teams who haven’t qualified, and the top-4 at May 31st will qualify for the Olympics.

They were very close, but just off that mark tonight, clocking 3:34.55. The splits for tonight were as follows:

Their time from Pan Ams of 3:34.40 will stand up as their time, and it’s very likely that will qualify them for the Olympics. However, they won’t know for sure until the end of May.

Pretty disappointing: Womens 50 free. I thought that Van Landeghem might be at 24 low in Rio, but now it will be very difficult.
Very disappointing: Mens 1500 free. It should be very difficult for Cochrane to reach the final. We have Detti, Paltrinieri, Yang, Jaeger, Horton, Akrem, Christiansen, 2 brits, McBroom probably all at sub 14:50. I think the final will be Detti, Paltrinieri, Yang, Jaeger, Horton, Akrem and 2 out of the 2 brits, Christiansen and McBroom.

Any chance that Atkinson adds anyone else to the team besides for the relays?

Not without completely disregarding athlete rights.

I’ve been waiting for that . . . thanks Forgotten!

No surprises to team named to Olympics, with the exception of Taylor Ruck. Excellent decision to take her to Rio.

I would say not naming Jason Block as part of the Men’s Medley relay was a surprise to me. They may officially name him later in June after they know for sure that they have a medley relay going. But counting on Baumann (winner of the 200 Br and on the team) to swim on the relay when he was a 1:01.5 doesn’t give Canada a chance imo.

Taylor Ruck makes the team.
Smart decision if she can get back to her 2015 World jr. form

Looks like Taylor Ruck gets the nomination for the free relays. Not a bad choice in my opinion, considering the best times that she has. A little bit surprised that they didn’t name a male 100 breaststroker for the relay, perhaps they could use Baumann, or maybe add someone else later.

Well the medley relay hasn’t yet qualified for Rio, the need to wait to see if they are still in the top 4 of the unqualified medley relay teams before Block can be named to the team. That being said, they are currently in a good position to qualify, and it is likely that Block will be added to the team at a later date.

I was convinced that they were going to nominate Jason Block to the men’s medley relay, then i reread the selection criteria (http://swimswam.com/qualify-2016-canadian-olympic-team/) and if they had gone under 3:34.02 tonight (they went 3:34.5), then he would have been named according to priority 5. However, looking a little deeper and adding up all the 100 time winners, if Santo hadn’t been disqualified in the 100 fly prelims, they additive time would have been a ~3:33.36 (3:35.16-1.8) well under the relay qualification standard.

So breaking down what I said above, if Santo wouldn’t have got disqualified in the 100 Fly prelims and assuming he won at night since he was a second faster than everyone, their… Read more »

Well it is also easier to add someone later on once they know that the team has indeed qualified, rather than naming someone to the team and then having the relay not qualify and subsequently having to remove the person from the team.

Ruck got added as a relay alternate