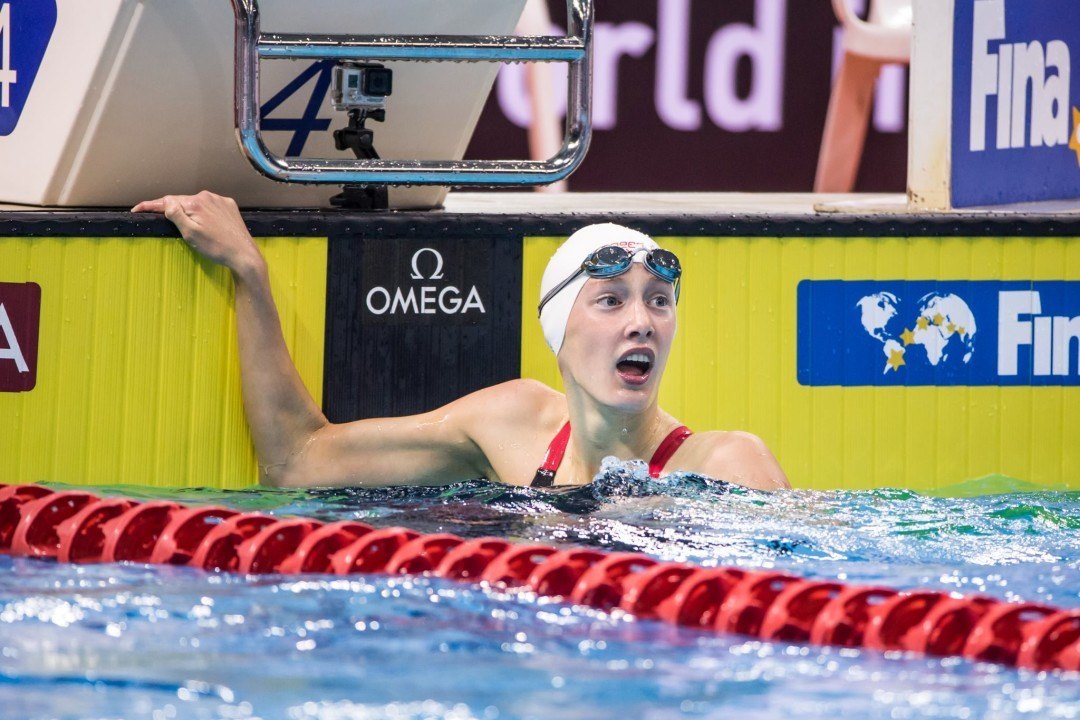 15 year-old Taylor Ruck will look to make the Olympic team tonight in the 200 free as she comes in as the top seed from the prelims. Archive photo via Adrian Seetho

The third night of finals action is upon us at the Canadian Olympic Trials, with four more races presenting opportunities for athletes to qualify for the Olympic team. First up will be the women’s 200 free, where the top two qualifiers from this morning (Taylor Ruck and Brittany Maclean) both swam under the FINA-A standard. If they can do so again tonight they’ll both qualify in this event individually. The top four finishers tonight will qualify for the team in the 4×200 freestyle relay, which adds to the excitement of this race. In the men’s 400 free Ryan Cochrane and Jeremy Bagshaw both have a very good chance of qualifying for the team. Cochrane is almost a sure thing, boasting a best time of 3:43.46, whereas Bagshaw will be close. His best time of 3:49.76 is under the standard of 3:50.40, but he was off his best time in the 200. The women’s 100 breast also saw two women under the qualifying standard this morning, as Rachel Nicol and Kierra Smith both did so. 2012 Olympian Tera van Beilen will look to run one of them down and earn an Olympic berth once again. The men’s 200 breast will feature Jason Block and Richard Funk who both missed the qualifying standard in the 100, as well as top seed James Dergousoff. Funk is the only one with a best time (2:11.51) under the standard of 2:11.66.

In a very competitive final, NCAA champion Brittany Maclean picked up her second win and second national record of the meet, touching 1st in the 200 free in a time of 1:56.94. That time eclipses Genevieve Saumur‘s 2009 record of 1:56.97. Penny Oleksiak picked up her second individual event for the Olympics, finishing 2nd in 1:57.59, well under the qualifying standard of 1:58.96.

100m fly favorite Katerine Savard earned a spot on the Olympic team tonight in the relay after finishing 3rd in 1:58.17. She missed qualifying in her signature event on the opening night when she was 3rd in a very competitive race. You could see the emotion on her face after qualifying. Also qualifying for the relay was Indiana Hoosier Kennedy Goss, who closed in the final 50m to move into 4th touching in 1:58.26. All four swam personal bests tonight, and these four will represent Canada in the 4×200 free relay in Rio. This will be a very competitive team, as Brittany Maclean said in her post-race interview “we’re going to be medal contenders this summer”.

Kennedy Goss’ father Donald, AKA Sandy, was a two-time Olympic silver medalist in the 4×100 medley relay at both the 1984 and 1988 Olympics.

Top seed coming into tonight Taylor Ruck swam well through 150m, but faded the last 50 and allowed Goss to pass her in the closing metres. Ruck touched 5th in 1:58.67, slightly off her prelim time of 1:58.27. Ruck made it five women under the FINA-A cut in that race, highlighting the depth the Canadian women have in this event.

Two-time Olympic medalist Ryan Cochrane earned his first qualification for Rio tonight in the men’s 400 free, touching in 3:48.54. Although it might be a little slower than he would’ve liked, Cochrane is on his way to Rio as he was well under the qualifying standard of 3:50.40. He’ll look to win a medal this summer, and in order to do so he’ll need to get back down to his best time of 3:43.46.Peter Brothers surprisingly picked up 2nd place, touching in a big best time of 3:51.26. Brothers swam a personal best this morning, going 3:53, and now he’s all the way down to 3:51. He just missed the qualifying standard of 3:50.40. Jeremy Bagshaw had a disappointing race, finishing 3rd in 3:51.29. Bagshaw’s best time from last summer (3:49.76) was under the standard of 3:50.40.

New Zealand’s Matthew Hutchins won the B-final in 3:50.12, just off his prelim swim of 3:49.84. Nonetheless he has qualified for the Olympics with two swims under the FINA-A cut of 3:50.40. His countryman Kevin Litherland just missed the standard, finishing 2nd in the consolation heat in 3:50.71. Connor Jaeger of the United States was well back for 6th in the B-final in 3:59.06.

Kierra Smith took over half a second off her morning swim to win in a blistering 1:06.93. She took almost a full second off her best time today, as coming in her best time was 1:07.88. Rachel Nicol was 1st this morning in 1:06.88, but fell to 2nd tonight in 1:07.10. Nonetheless, both of them qualify for the Olympic team as they were both well under the qualifying standard of 1:07.85.

Fiona Doyle from the University of Calgary won the B-final in 1:09.13.

Ashton Baumann came into tonight’s final and dominated from the start, touching in a huge personal best of 2:10.69 for the win. His best time coming in was 2:13.44. He was out from the start, going out in 1:02.37 at the 100 and managed to hold on coming home. His swim gets him under the FINA-A standard of 2:11.66 and punches his ticket to Rio. He was a member of the 2013 World Championship team in this event. Baumann is the son of double Olympic gold medalist in 1984 Alex Baumann, who won gold in both the 200 and 400 IM in Los Angeles. That makes two Olympic medalists from 1984 had their children make the Olympic team on the same night, with Kennedy Goss qualifying as well.

100m breaststroke winner Jason Block touched 2nd in 2:13.21, improving from his morning swim but not enough to qualify for the team. Pan Am silver medalist last summer in this event Richard Funk capped off his disappointing trials meet touching 3rd in 2:13.46, well off his best time of 2:11.51. Funk was the favorite to qualify in both breaststroke events this week, but things haven’t gone his way.

Pretty bad time for Cochrane, i really dont see how he wants to win any medal in Rio.
1500 free: Yang, Paltrinieri, Detti, Jaeger and many young guys
400 free: Yang, Guy, Horton and many other fast guys
I think Condorelli at 100 free is the only chance for Canada to win a medal on the mens side. On the womens side we have some possible medal chances (McLean (400 free), Oleksiak (100 fly), Masse (100 back), Overholt (400 IM)), but no safe medal anymore, since Overholt looked pretty weak this week.

I forgot womens 4 x 100 free (Canada might fight for bronze against USA and China) and womens medley relay (China, USA and Australia look stronger, but maybe Canada can challenge for a medal).

Cochrane didn’t look great in the 400m free Trials, but he has won a medal at every Worlds or Olympics starting with Beijing.

He also won his first ever Worlds medal in the 400m free last year.

I agree that Cochrane is not a medal lock, but he is certainly a medal hopeful and until three guys beat him in a 1,500m race I’ll give him the benefit of the doubt.

I can sneak this in here (no Miami parents reading ). TSS is one of the most exciting developments in Australian swimming. It is the orphan of Bill “s ExcellentBritishAdventure. In 2005 he set up an offshore centre for boys of Motivated & Financially committed parents at the TSS on the Gold Coast. He brought out some of Englands best coaches who had a proven commitment to ‘mileage’. On winding up in 2010 , the coaches stayed on & along with heading the schools sport have attracted good but not established swimmers to the squad. Bit by bit they are now number 2 Age group club in Australia . Their first… Read more »

Thanks for the info!
So Ashton Baumann left Canada and trained in Australia?
Alex Baumann knows what’s it all about! 🙂

Are the B finals after all the A finals are done?

Agreed. Jason block was so close. I also feel so bad for Richard funk!

I don’t know what is worse: missing the olympics by a fraction of a second because you didn’t hit the A cut or having Scott Russell ask you how you feel immediately after you just miss it…