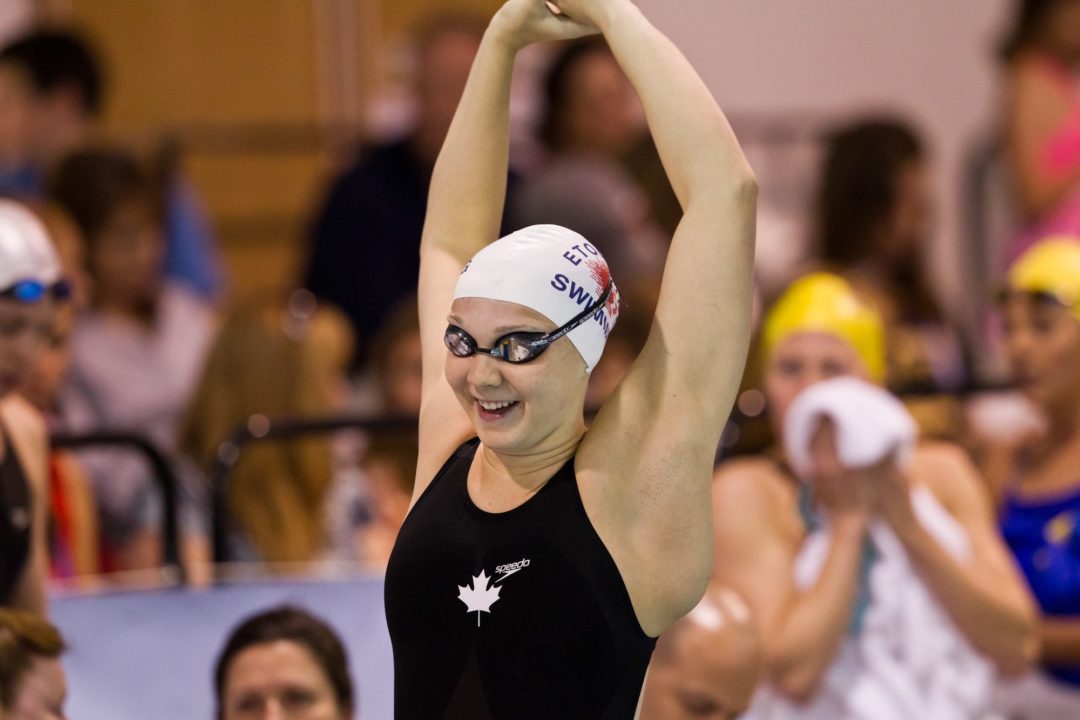 Brittany Maclean of Etobicoke will look to make the Olympic team for the second straight time tonight in the 400 free after dominating the prelims.

The first night of finals for the Canadian Olympic Trials will commence tonight, with lots of buzz on deck and around the country as Olympic spots are finally up for grabs. Unlike previous years, the winner of an event won’t automatically qualify for the team. If the swimmer wins and is under the FINA-A standard, they will qualify for the Olympics. If a swimmer finishes 2nd and is under the standard they qualify as well. Those who win but don’t make the standard have the possibility of being put on the team at the end of the meet once all of the other criteria’s have been filled. Among the highlights tonight will be the women’s 100 fly and the men’s 100 breast. Both events shape up to be three-way battles after a very close prelim in both events.

Etobicoke’s Brittany Maclean came in and dominated the women’s 400 free final, touching in 4:03.84, the 2nd fastest time in the world this year. The time also demolishes her Canadian record of 4:05.06 from the London Olympics. She immediately becomes a medal threat at the Olympics with this swim and still four months to go till the games.

15 year-old Taylor Ruck touched 2nd in 4:09.93, taking off over three seconds from her previous personal best of 4:13.51 set at the 2015 Pan Am Trials. Ruck’s time was less than a second off of the Olympic qualifying standard of 4:09.08. 3rd place went to Kennedy Goss of the Granite Gators in 4:10.30, taking off three seconds from her previous best time as well. Maclean’s Etobicoke teammate Olivia Anderson was 4th in 4:14.80, and Sophia Saroukian of Edmonton Keyano was 5th in 4:14.99.

Calgary’s Jason Block pulled off the upset over Richard Funk winning in 1:00.59, a personal best time but just off the qualifying standard of 1:00.57. Funk labored to the finish, touching in 1:00.92 for 2nd. Funk was off his prelim time of 1:00.66 and best time of 1:00.26 from the 2015 World Championships in Kazan. Both still have hope to qualify for the team, as they’ll both be factors in the 200 breaststroke, and one of the criteria in qualifying involves the winner of each 100 qualifying for the medley relay.

James Dergousoff and Ashton Baumann tied for 3rd in 1:01.56, with Konrad Bald touching in 1:01.97 for 5th. Dergousoff took off a bit of time from prelims, while Baumann added nearly half a second.

After surprisingly taking the top seed this morning, 15 year-old Penny Oleksiak didn’t disappoint tonight, taking the win 56.99, a new Canadian record. Touching 2nd was Noemie Thomas who went 57.02, the second fastest time in Canada’s history. Oleksiak and Thomas both broke 58 seconds for the first time this morning, and now they are right at the threshold of 57 seconds (with Oleksiak under it obviously). Both women crushed the Olympic qualifying standard of 58.74 and qualify for the team.

Surprisingly, previous Canadian record holder Katerine Savard didn’t make the Olympic team, despite being nearly a full second under the standard. Savard touched 3rd in 57.75, off of her best time of 57.27 from 2014. Savard was the 5th place finisher at the World Championships last summer.

National team veteran Audrey Lacroix touched 4th in 59.10, and Rebecca Smith was 5th in 59.46. Look for Lacroix later in the week to be one of the favorites in the 200 fly.

Canada’s 4x200m free relay has yet to qualify for the Olympics, and if the top-4 combined times added up to 7:10.92 they would have made it, but they failed to do so. They still have a good chance of qualifying the relay, they just need to wait and see if they’re in the top-4 among teams who haven’t qualified. A lot of power sits in the hands of high performance director John Atkinson in adding relay swimmers if he so chooses.

Its really surprising how good canadian women became all of a sudden, the same is true for canadian athletics …

Oleksiak, had not seen much of her but… Her physique is ideal for swimming – Her upper body is a triangle, even for a slight young woman. Powerful broad shoulders, tall with long levers, big feet, beautiful stroke, great buoyancy/position in the water.

So easy to forget how young Sjöström is but with Ikee & Oleksiak coming through – Women’s fly could be grandstand in a few years.

Dont forget about Chen Xinyi, who was born in 1998 and is the only serious medal contender among those 3.
Is it only me or do Ruck and Oleksiak look very similar to each other and to Missy Franklin?

Because all three are proud to be Canadian probably 🙂

Franklin obviously not …
(Thank god the up-/downvotes dont work anymore)
On the other hand Canada got Condorelli, so i guess both sides can be happy.

You can check out omega timing for splits on the results.

Some brilliant swims. I think it is shortsighted that Luke Reilly and Jason Block are not nominated. This is more of the Own Own the Podium nonsense that is destroying Canadian sport.We have to stand up to these people and tell them they are wrong. Send our winners, send our best and see what they can do.

On a less important note, the live feed was awful and the results links were broken all day.

Your results in swimming and athletics went through the roof in just 1 or 2 years, i think your federations are doing a very good job.

What makes me excited about Brittany Macleans swim is that she is a great racer (ex. NCAA 200 free)
She was completely by herself, give her some girls around her and I see her going even faster.
The race in the 400 is still for the silver and bronze though

Swimming short course yards and NCAAs definitely hurt her swimming this year. heheheheh. Lots of haters out there that think it screws up a swimmer’s LCM season or their capabilities and it really just isnt true.

He is very religious in his belief that all NCAA swimmers are at disadvantage.

Or the exact opposite could happen, she wont be able to swim at her best if she has to swim against the other big girls. I dont think that she can touch Ledecky, Ashwood, Carlin or Van Rouwendaal, but she should be pretty safe to make the final.

0
0
Reply
Watching in the USA

If you change your IP address to a Canadian one you can watch the CBC feed. I’m in Florida and doing this.

0
0
Reply
Isabella
Reply to  Watching in the USA

how do you do this

By my count, there may be 7 teams capable of going 3:55 or faster for the 400 medley relay on the girls side:

GB and Russia could also get there. Sweden and Japan seem to have problems in backstroke, i think they are the weakest among those nations you mentioned, maybe even weaker than GB and Russia. In my opinion China, USA, Australia and Canada will fight for the medals. Denmark has some problems in freestyle, but could surprise and fight for bronze. Canada is probably the weakest among those nations in back and breast, so i wouldnt bet them on the podium. My bet would be gold for Australia, silver for USA and bronze for China, with small chances for Canada and Denmark.

i agree, the Canadian women look like they will be a force this summer. Good on them!