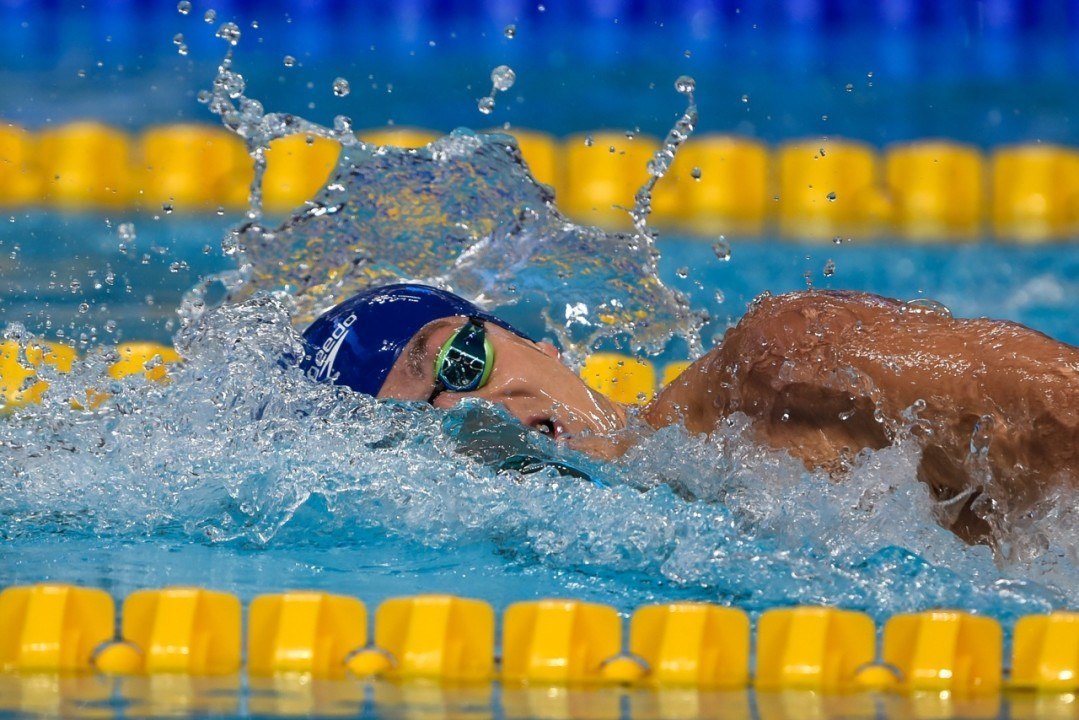 Bath University’s Siobhan-Marie O’Connor scored the quickest time of the morning, setting her up for a potential 2nd individual event after her decisive 200 IM victory last night. O’Connor clocked 1:07.19 to lead the field as the only sub-1:08-second swimmer of prelims.

Entering the meet, O’Connor’s personal best in the event was the 1:07.79 she clocked just in January of this year competing at the Miami Super Series in Australia. So the 20-year-old kicked things off with a lifetime best, although she’ll need to drop at least another two tenths to get within the realm of even the stiff British consideration standard of 1:06.94.

Chloe Tutton, who broke the British National Record in the women’s 200m breast event earlier in the meet, is right in the mix in this shorter event as well. Tutton secured the 3rd seed in a time of 1:08.41, just .10 of a second off of her personal best of 1:08.31 she registered earlier this year in Marseilles.

The double gold winner from Baku, Luke Greenbank, turned in the fastest time of the morning in the men’s 200m backstroke, stopping the clock at 1:58.00. Greenbank finished out of the final in the 100m back at this meet, so the Cockermouth swimmer is looking to punch his individual event ticket to Rio in his better-suited 200 back, where his best time of 1:56.98 is still a second off the 2% consideration time.

Plymouth Leander’s Joe Patching was the 2nd of 3 swimmers to venture into sub-2-minute territory, earning the 2nd seed in 1:59.48. Patching’s best time rests at 1:58.17, which garnered him the silver medal last year, so he’ll need to have the swim of his life to have a chance at notching an Olympic berth in the event.

All in all, though, this looks likely to be an event without British representation in Rio unless someone pulls out a phenomenal swim in the final race.

The women’s 100 butterfly event showed some promise, with a crop of women all tightly packed at the top of the post-prelim rankings. Loughborough University’s Rachael Kelly topped the morning with a swift 58.46. Kelly is the defending champion in this event, having won the gold in London last year in a time of 57.72. That mark sits just .01 out of the 2% consideration standard, so it will take the 22-year-old a lifetime best to even notch the 2% consideration standard tonight.

Bath University’s Jemma Lowe is chasing her Olympic dream as well, scoring a time of 58.88 to sit as the 2nd seed, with Swansea’s Alys Thomas hot on her heels, just .02 of a second behind with a 3rd-seeded 58.90.

Siobhan-Marie O’Connor clinched her 2nd final appearance of the AM, checking in as the 4th-fastest swimmer in this event with her morning mark of 59.11. She’s been as fast as 57.45, which is what rendered her the 2014 Commonwealth Games silver medal.  In the interest of energy conservation, O’Connor may very well drop one of these events for her final session tonight.

The teenage phenom that is Emily Large of Newcastle is lurking in the 7th position after registering a morning swim of 1:00.69. At just 15 years old, Large already made her mark on the meet by winning bronze in the 200m fly distance in a remarkable time of 2:09.47.

The most anticipated race of the morning didn’t disappoint, as the men’s 200 freestyle is stacked with talent headed into tonight’s final. University of Stirling’s Duncan Scott, who already claimed gold by upsetting Ben Proud in the men’s 100m freestyle, raced his way to the top seed this morning with a time of 1:47.28.

For the kid who already notched a personal best in the men’s 200m IM last night en route to winning bronze, Scott also topped his own personal 200 free rankings this morning, beating his previous lifetime best of 1:48.25. With the meet Scott is having, anything can happen tonight.

The reigning World Champion in this event, Millfield’s James Guy, cruised into the 2nd seed with a solid 1:47.33. After scoring an opening 200 split of 1:49.41 during his 400m freestyle swim on day 1, fans got excited as to what the 20-year-old has in store for this race. 1:45.14 is what it took Guy to touch out China’s Sun Yang in Kazan, so he’s more than capable of hitting the 1:45.91 British qualifying standard.

Scott’s teammate, Robbie Renwick, was last year’s runner-up to Guy in this event and looked strong this morning as well. Renwick holds the Scottish National Record in 1:45.99 and he fell within 2 seconds of that with his morning outing of 1:47.49. Renwick’s silver medal-winning time was 1:46.64 last year, so he, too, will be one to watch to get within striking distance of the British Olympic-qualifying standards tonight.

Dan Wallace, who so far has missed out on individual Olympic qualification in his 400m freestyle, 200m IM and 400m IM events, will use this swim as his final opportunity. Wallace is seeded 5th after the morning swim, having clocked a time of 1:48.41.

One name missing from the final is Calum Jarvis, the Ellesmere swimmer who earned bronze in this event last year behind Guy and Renwick. Jarvis’ 2015 British Championships time was 1:46.65 and he scored a mark of 1:46.61 in Kazan to make into semi-finals. So the fact he missed out tonight is surprising, but speaks to the depth in this particular event.

The only Real contender to try beat Usa this summer .

What was even better about Renwick’s swim was that he split a 53 and a 54!

The most satisfying picture in the 200 is the age of all the men involved.

A really deep squad of young talent – Really signifies Britain could be strong in the mens mid-distance free for some time.