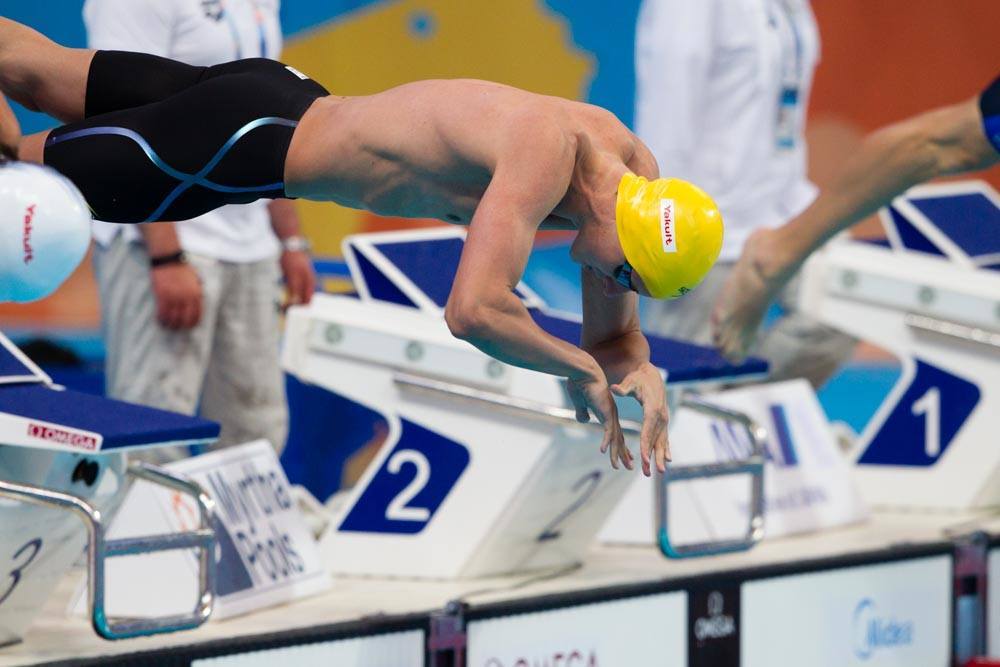 Cameron McEvoy cranked out the world's fastest 100 freestyle so far this season (47.56) on day 1 in Perth and blew out the field again tonight in the 50m freestyle, scoring a 21.73 scorcher. Archive photo via Tim Binning/TheSwimPictures.com

Cameron McEvoy throws down a 47.56 100 freestyle in Perth to scorch the field and the world rankings.

China’s Sun Yang has had to pull out of this weekend’s Aquatic Super Series due to a foot injury.

Aussie Cameron McEvoy stunned the world yesterday by putting up the 3rd-fastest textile performance in history in the 100m freestyle, clocking a stellar 47.56 for a personal best. Today, the 21-year-old was back at it in the 200m free, taking on his countryman David McKeon and 18-year-old Japanese freestyler Fuyu Yoshida.

McEvoy got the job done today, registering a mark of 1:46.71 to beat the field by well over 2 seconds and log a time within the top 10 in the world. McEvoy already holds the 3rd-fastest at 1:46.44 from Queensland Championships last December and both times are much quicker than the rather disappointing 1:47.26 he scored at last year’s World Championships that rendered the would-be medal contender an 8th place finish.

The Campbell sisters were brilliantly consistent once again, with sub-54-second outings all.day.long. Cate Campbell topped her sister tonight, registering a time of 53.02 for the win. That time sits as the 3rd-fastest in the world, yet Cate already holds the #1 time of 52.89 clocked at Queensland Champs. Bronte Campbell touched .28 of a second behind her sister tonight, scoring an impressive 53.30 to earn 2nd place.

The two sisters were in a league of their own, as the next-best finisher was China’s Zhu Menghui , who touched in 54.19. But, Menghui’s time was actually quite impressive in itself, as the athlete is just 16 years old, carrying on the trend of youth within the Chinese team in Perth. Menghui’s result lays within half a second of the World Junior Record. That mark sits at 53.84, a time earned by Chinese teammate Shen Duo, who wound up 5th in this race with a time of 56.12.

Three swimmers skated on the thin minute border within the 100m breaststroke tonight, but none broke through, as the quickest time was that of Japanese breaststroker Yasuhiro Koseki at 1:00.33.  That beats his 1:00.50 he scored at last weekend’s Kosuke Kitajima Cup that earned him first place at that meet, but is well off the times held in the upper echelons in this event, held by the likes of South Africa’s Cameron Van der Burgh (58.97) and Great Britain’s Adam Peaty (59.28).

Just .02 of a second behind tonight was China’s Yan Zibei, who claimed a time of 1:00.35 for 2nd, followed by the highest Aussie finisher, Jack Packard in 1:00.77. Packard has been sub-minute recently, logging his time of 59.94 at the Queensland Championships.

Ever-consistent Emily Seebohm, the Australian National Record Holder in both backstroke distances, dipped beneath the minute threshold yet again in the 100m. Tonight she touched in 59.03, another stunner to give her the top 2 times in the world. She already wears the world ranking crown with the 58.34 she rocked at the World Cup Dubai last year.

Right behind her was another solid performance by 21-year-old Madison Wilson, who finished in 2nd place with 59.49. Wilson is accustomed to being the bridesmaid in this event, having earned silver behind Seebohm at the 2015 FINA World Championships (58.75). Both Aussies were the only women going sub-minute with China finishing in 3rd tonight with Chen Jie‘s 1:00.36.

As in yesterday’s 200 butterfly race where the highest Aussie finisher was David Morgan in a distant 4th, the sprint fly event today also highlighting the Aussie men’s lack of internationally-competitive butterflyers. In tonight’s race, it was Chinese teenager, Li Zhuhao who wowed the crowd with a stunner of a swim, stopping the clock at 51.97 for the win. That’s within a second of the youngsters World Junior Record he holds at 51.33 set in Kazan.

20-year-old Takeshi Kawamoto from Japan nabbed 2nd in 52.44, with his teammate, veteran 30-year-old Takuro Fuji wrangling in 3rd in 51.58. For Kawamoto, his mark tonight haves about a tenth of a second from his thus-far season best of 52. 53.

The Aussies found themselves in the 5th and 6th positions in the race, with David Morgan touched in 53.90 to Jayden Hadler‘s 54.62.

Winner of 3 events on day 1 across 2 individual races and 1 relay, Aussie Emma McKeon found herself in a battle with Chinese teenager Siqi Wang in this women’s 200 butterfly tonight. McKeon wasted no time being the hunted, taking her first 100 out in 59.88 to Wang’s 1:01.34. But, McKeon suffered in the back half, as her aggressiveness caught up with her and Wang wound up out-touching her by .44 of a second. Final times for the 2 women were 2:07.24 for Wang to 2:07.68 for McKeon. Below are the splits from the two top competitors:

Japan went 1-2 in the men’s 200 IM, though the leader Hiromasa Fujimori threw down one heck of a swim by himself. The 24-year-old rocked a stellar 1:57.66 for a huge lifetime best, soaring to the 2nd spot in the overall world rankings this season. With tonight’s monster swim, Fujimori frog-hopped his teammates, killer combo Daiya Seto and recently-returned-from-elbow-injury Kosuke Hagino, in the world rankings, which is certainly not an easy feat. Fujimori’s time would have rendered him 5th at last summer’s World Championships.

Also swimming a sub-2-minute IM was Takeharu Fujimori, finishing with a silver for Japan. His 1:59.90 was a solid swim, but off his previous season-best of 1:58.13 logged back in September at Japan’s Intercollegiate Championships.

The Dolphins picked up some points in the form of Travis Mahoney‘s 3rd-place finish in a time of 2:00.26.

Rising distance ace Jessica Ashwood (AUS) doubled up on her 800m freestyle victory from yesterday with a win in the 400m, clocking a time of 4:05.76.  Ashwood earned the bronze in this event at the 2015 World Championships, scoring a new Australian National Record of 4:03.34 in the process, so tonight’s mark was just over 2 seconds off of that standard. But, tonight’s performance did knock off about 2 tenths from Ashwood’s season-best headed into this meet, replacing her own 4:05.96 as the 5th-fastest time in the world right now.

13-year-0ld Li Bingjie earned her 2nd silver of this competition, after already taking the runner-up spot in yesterday’s 200m butterfly. Tonight she touched in 4:09.41 for an impressive swim behind Ashwood, holding off her 13-year-old teammate Ai Yanhan by just .01 of a second. Yanhan touched in 4:09.42 for 3rd, taking just under a second off of her seed time of 4:10.87.

Coming off his 200 freestyle less than an hour ago, stud Cameron McEvoy stunned the crowd throwing down a phenomenal 21.73 in the men’s splash n’ dash. The mark is another personal best for the sprinter, hacking two tenths of a second off of his own previous career-fastest mark of 21.94 from the 2014 Commonwealth Games.

Aspiring physicist McEvoy just rocketed himself to 4th in the world rankings, now rubbing elbows with the world’s most elite swimmers to the tune of France Florent Manaudou and the United States’ Nathan Adrian. As reported yesterday, McEvoy’s coach, Richard Scarce says his athlete is untapered at this meet, having just come off hard, fitness-focused training.

As in the 100, Aussie teammate James Magnussen finished in 2nd place, this time touching in 22.32. Although well-off the 21-mid to 21-high range #Maggie is used to, the time is very respectable given that the 24-year-old is just competing in his 2nd meet after having returned to racing since undergoing extensive shoulder surgery last summer.

3rd in the race went to China’s Yu Hexin in 22.49, with Japan’s National Record Holder in this event, Shinri Shioura winding up 4th in 22.53.

With her outstanding performance tonight, Kaneto also downed her own Japanese National Record and Asian Record in the event, destroying her old mark of 2:20.72 set all the way back in 2009 (aka, the rubber suit era). She now sits as the absolute top time in the world by a wide margin:

To add to the superlatives, Kaneto’s time would have won gold at least year’s  World Championships….by over a full second. The winning time was that of Japanese teammate Kanako Watanabe in 2:21.15, so tonight’s sub-2:21 just demolished that already-impressive swim. In that Worlds race, Kaneto clocked a 2:23.19, by the way.

Kaneto now ranks as the 5th-fastest performer of all time in the event – again, at 27 years old.

Runner-up tonight was Aussie Georgia Bohl in 2:24.52 and another Aussie, Tessa Wallace scored 3rd in 2:26.97. Taylor McKeown backed out of the meet due to a groin injury, thus she was not in the race.

Australian National Record Holder and double World Champion, Mitch Larkin, did what was needed to claim the win tonight, finishing the men’s 200m back in a time of 1:56.61. Even with a time about 3 seconds off of his usual head-turning 1:53-range, Larkin beat out the next best competitor, China’s Xu Jiayu by about a half a second. Jiayu finished in 1:57.21.

3rd tonight went to Japanese swimmer Masaki Kaneko who touched in 1:57.57. The same 3 fell into the same slots as they found themselves in last night in the 100m backstroke event.

Doubling up on his 400m freestyle victory from yesterday, 19-year-old Mack Horton got the job done once again tonight in the 1500m race. Horton has a huge history in this event, holding the All Comers Record at 14:44.09, but tonight just did enough to hold off another teenager, Chinese swimmer Wu Yuhang (18).

Japan continued to turn it on today, taking the team’s 4th victory tonight in the form of Sakiko Shimizu‘s 4:38.13 winning time in the women’s 400m IM. Shimizu was the only competitor to score a time beneath 4:40, yet the mark was off of the 23-year-old swimmer’s season-best of 4:36.35 from the World Cup Dubai.

Silver tonight went to Shimizu’s teammate, Miho Takahashi, who touched in 4:43.54, with China’s 19-year-old Ye Shiwen cleaning up bronze in 4:45.80.  For Shiwen, she found herself off the podium in yesterday’s 200m IM event, so today was an improvement for the double Olympic gold medalist.

In the final men’s event of the competition, the Aussie Dolphins snagged victory in the men’s 200m freestyle relay. Magnussen led off with a 22.52, two tenths slower than today’s individual performance, followed by splits of 22.64 and 22.13 for Ashley Delaney and Travis Mahoney, respectively. McEvoy smoked the field once again with the only sub-22 split of the entire final, registering a 21.59 to help push the Dolphins to a 1:28.88 winning time.

In front of cate as a fighter? Do you know what cate has been through?!

Yes. What was strange in my assertion?

Why there are no race videos?

Televised live in AUS on free to air TV, no live streaming. This meet lost its naming rights sponsor 6-8 months ago and they were unable to find a “full replacement” so this meet is running on a significantly smaller budget than last year.

But It gained nationwide free to air mainstream coverage at 8.30 Fri & Sat night. Less pocket money for swimmers certainly but good for the sport.

It was presented & came over very well similar to tennis’s Hopman Cup. The Chinese & Japanese love going to Perth & we like seeing them. All good imo.