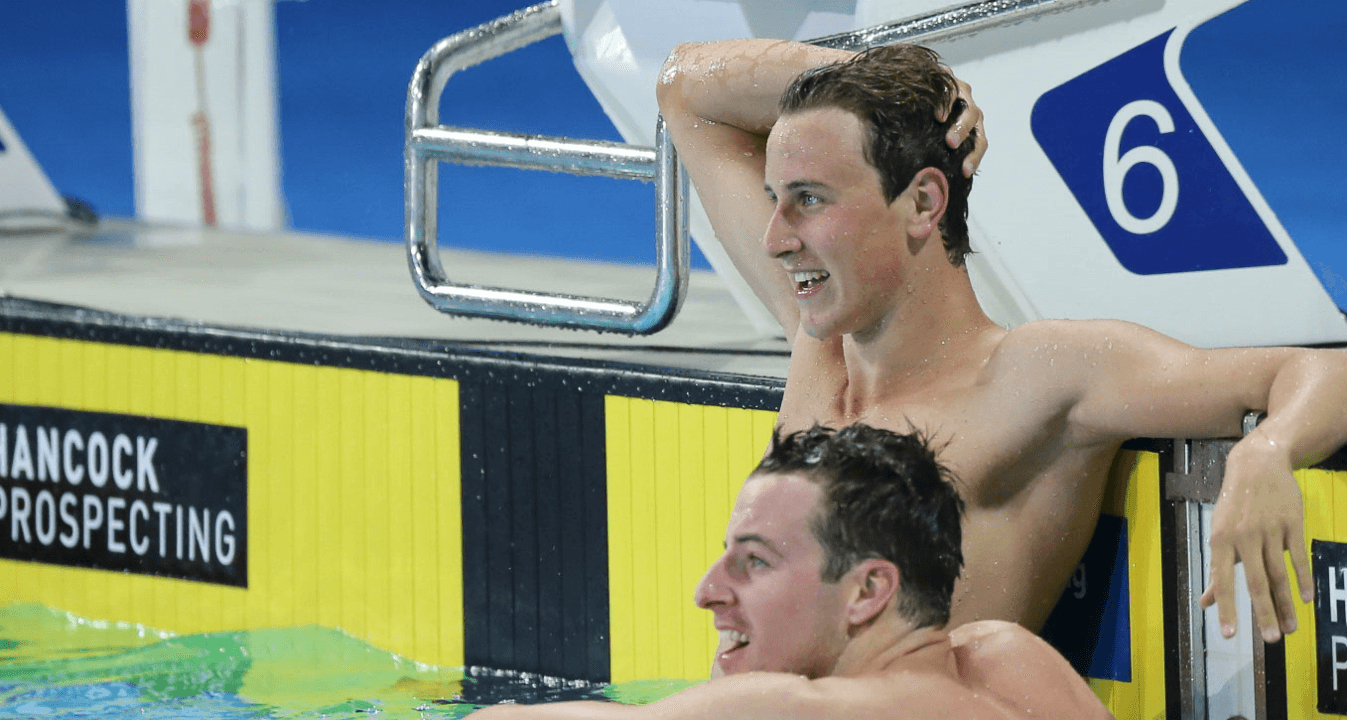 Cameron McEvoy and Coach Richard Scarce say the 47.56 stunner in Perth was 'untapered and after hard trianing.' Archive photo via (courtesy of Paul Younan)

Australian Cameron McEvoy made major waves in the Perth pool on day 1 of the Aquatic Super Series, the tri-team spectacular which pits the Aussies against visiting squasd from Japan and China.

As reported in our live recap, 21-year-old McEvoy set the pool aflame in the 2nd event of the night, the men’s 100m freestyle, where he threw down a personal best of 47.56. That time sends a hug message to the likes of speeding studs in Brazil and the Frenchman Florent Manaudou, just months out from the 2016 Rio Olympics.

Not only was McEvoy’s time a personal best, but he takes over the top spot in the world rankings this season.

Looking back at last year’s FINA World Championships, the mark would have won McEvoy the gold medal in the individual 100m event, stopping the clock .28 of a second ahead of first place finisher in Kazan Ning Zetao from China.

Also impressive in McEvoy’s performance was how the athlete magnificently split the thing….23.14 opening 50 to 24.42 on the back half. That’s crazy fast for the Bond University physicist, ranking him the 11th-fastest performance of all time:

And, according to his coach, Richard Scarce, McEvoy accomplished all this being untapered. Post-race, Scarce told the Aussie press that McEvoy ‘came into this competition under some pretty tough training after just finishing off a more fitness oriented block.”

McEvoy himself commented, “To come out and swim a best time when I’m not fully tapered at all, that’s exciting.” He continued, “My training has been going really well and it has improved in all aspects of it, but the translation from training to a race, you are always unsure.”

Putting his 3rd-fastest textile performance swim of all time into perspective, McEvoy said, “I thought fully tapered it would be a time around where that was so to swim that while reasonably un-tapered it is also very exciting. It gives me that much confidence to jump on the plane on Monday and go straight to training when I arrive home.”

Also putting up a sub-50-second time was 2nd place finisher James Magnussen, who clocked a 49.34 in just his second competition since returning to racing after having undergone extensive shoulder surgery last summer. Magnussen’s mark was just a hair faster than the 49.35 he clocked at the Victorian Open late last month.

Knowing his outstanding effort tonight will turn heads around the globe, McEvoy acknowledges, “Everyone in the world has already stepped up and I had to step up in my own way, I fully expect everyone to be reading the results tonight and it will fire them up to get back in the water. I have to keep the momentum going in order to make sure that I keep improving.”

Of the entire Aussie team’s efforts tonight, Australian Head Coach Jacco Verhaeren said, “We saw some great performances for this part of the season. It’s always great to see people getting close to their personal best times, and sometimes even improve upon them. Cam McEvoy was amazing, so I’m really, really happy.”

“We are trying to stay as relaxed as possible and don’t talk too much about possible wins, possible losses, possible records, possible medals, we talk about sticking to the process, really thinking about control what you can control, and to give it your best. To be honest there is not a lot more you can do, and tonight I see a team doing that and that makes me really feel proud,” said Verhaeren.

Thanks for the catch! Corrected.

Hehe, can’t have the aussies seeing a McEvoy (USA). That”d be almost blasphemous 😉

Swimming is a crap shoot sometimes. He can do a swim like this I tapered and unshaved, but when tapered and shaved he might not go faster than 48.00.

A great swim is a great swim – it is a moment in time and means nothing beyond that.

If that’s right then he will break the world record at Australian trials.