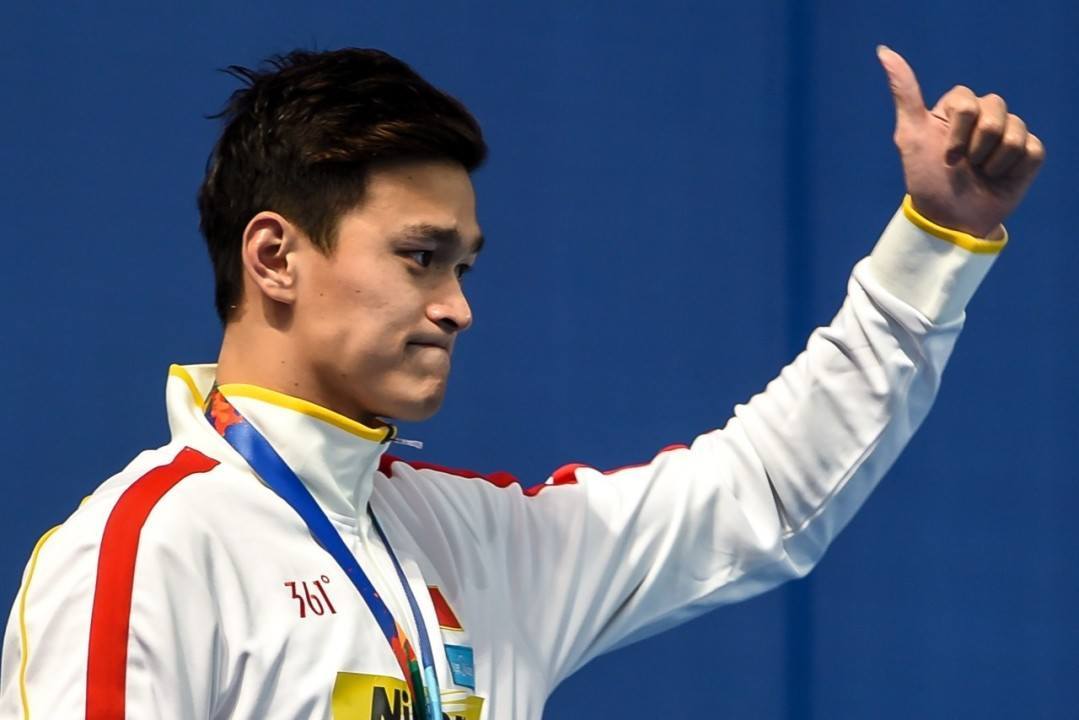 China's Sun Yang has had to pull out of this weekend's Aquatic Super Series due to a foot injury. Archive photo via Peter Sukenik/www.petersukenik.com

New China is reporting that Chinese Olympian Sun Yang has suffered a foot injury while training in Australia and has withdrawn from the Aquatic Super Series slated for this weekend in Perth.

The double 2015 World Champion reportedly needs 6 weeks to recover from an injury sustained during a jumping exercise session. The incident sent him to the hospital where X-rays confirmed a fracture in the fifth metatarsal bone in the right foot.

“It hurt so bad and I almost cried this morning,” Sun told Xinhua. “But I try to think in a positive way and I believe I’ll get through it.

The 24-year-old chose a more conservative treatment plan from two options he said the local hospital had offered him, but didn’t elaborate on what exactly is entailed in the treatment.

However, Sun does reassure the public about his recovery for the Olympics saying, “Don’t worry about me. The injury won’t upset my preparation for the Rio Olympics.”

Below is a video of Sun Yang being transported into the hospital in a wheel chair, foot propped up. The swimmer’s X-ray is also displayed within the video, for those that know how to read them. A member of the medical staff even high-fives the athlete and is heard saying, “I’m in the presence of greatness.”

Sun then emerges from the hospital with his foot in a boot and he is using crutches.

The unexpected withdrawal is reminiscent to Sun’s shocking no-show at the men’s 1500m final in Kazan at the 2015 FINA World Championships. After already earning gold in the men’s 400m and 800m freestyle events, Sun left his lane empty for the 1500m final event, citing a heart problem, which rendered him unable to compete in the final.

As for his recent foot injury, the plan is for Sun to continue training in Australia and is scheduled to return to China in mid-March.

The Chinese have us looking the wrong way with this story. I think they did a surgery to install a hidden engine inside his body for use at the Rio Olympic 1500M race. They broke some other bones to install some metal pins throughout his body so he has good excuse to get past the metal detectors at the airport. I am pretty certain about this cause I read a story about mechanical fraud in cycling this past weekend.

I got to love your view – its very well ironic and points out how weird Sun became since the last WC .

i know many people dont like or trust sun anymore, but here are the links to a documentary about him on yt, in case someone is interested.

also, at around minute 17 in part 2 the doping violation is more or less explained. (again, im not defending him and i dont intend to start a discussion about if its true or not, what is stated in the video!)

Is he avoiding being tested or is he avoiding swimming because his performance is poor without chemical aids?

his performances have been impressive genius.

I get it, he’s got a doping violation, and that puts him under additonal scrutiny in the eyes of the swimming community, but I think some of you are jumping to conclusions. He could be avoiding tests, sure. Or he could have broken his foot because his trainer let him use the wrong form and/or shoes, or because the foot is delicate and our sport doesn’t exactly cause increased bone density in the feet and legs like many land sports do. He could just be injury prone, we all know someone like that.

If he wanted to pull out of a meet to avoid being tested, why would he fake a story that has to be kept up for six… Read more »

Swimmer – emotion & your aggrieved feelings do not have much to do with foot injuries. He was scanned at an Aystralian hospital & unless you have something else to offer , I’d take it as fact – he has a foot injury.

You are likely not a ticketholder in Perth so what is it to you if he has withdrawn?

Fair point Gina – I don’t feel any particular suspicion about his foot injury, but my response was more to do with your question about what everyone’s problem with Sun Yang is.

It is not that ppl don’t know they have an injury but wait for better time to have surgery & rehab if they can. There are a lot of bones in a foot & anything from a complete break to fracture to spurrs .

What is everyone’s problem here?

Difficult to know what everyone’s problem is here, Gina. I’m guessing it might have something to do with the doping violation that didn’t really result in a ban. Or maybe it’s the last minute no-show for a world championship final for no clear reason, which deprived another (clean) swimmer of a second swim and forced the other finalists to swim with an empty lane? Either way, signs point to Sun Yang having no respect whatsoever for his fellow competitors or his sport, as as we’re all fans of the sport it’s possible some point might take an issue with this.

Don’t worry about him, though – Fina’s got his back…

come on! no show for no clear reason? thats just rude and ignorant 🙁
i am not defending sun yang but i stay neutral since for both the doping violation as well as for his no show there were real reasons. also, remember statements of 15 yo sun like ‘i dont even deserve to swim in the same pool as phelps and lochte’, i think he still does have very much respect for the sport and his competitors.
i know most of you will think i am super gullible but thats ok with me. as long as there are somewhat acceptable explainations for stuff like his “misdeeds”, i will believe it, no matter which country they are from.… Read more »

It’s not rude or ignorant – it is absolutely not clear why he didn’t turn up. There was an altercation with another swimmer in warm-up, and there was some kind of disturbance that ended up with a locker getting kicked in. Then we were told he was unwell. As I said: not clear. The least you can expect in these circumstances is a clear explanation as to why. It’s not a club meet we’re talking about here, it’s the World Championships. Making a final is a huge deal – so being denied the chance to swim in a final is a huge deal.

What’s with Chinese swimmers and foot injuries? Ye Shiwen apparently had a broken bone in her ankle that she didn’t know about and used it to excuse away her performances in 2015.

It’s in their history?

Yes he failed another precompetition drug test. It amazing the great lengths they go to for an excuse. Fake xray and hospital visit to throw us off the scent.

there is not a doubt in my mind bruv