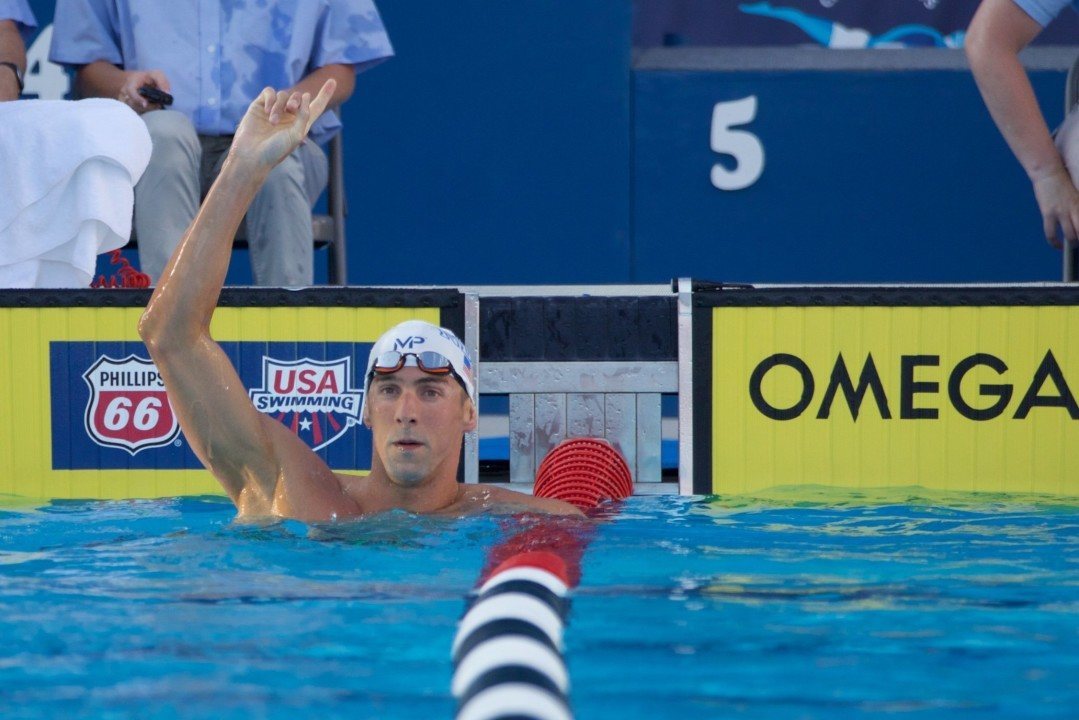 Now that we have all witnessed the glory that is the Michael Phelps comeback trail, we can safely get psyched for his prelims swim in the 100 fly. Current photo via Rafael Domeyko

Now that we have all witnessed the glory that is the Michael Phelps comeback trail, we can safely get psyched for his prelims swim in the 100 fly. Are we in for another world top 10 ranking out of prelims? Possibly. Will Phelps be eyeing the times from the finals of the FINA World Championships this morning? Definitely. If he wants to win though, he’ll have to get past Jack Conger, who was the fastest American of 2015 before Kazan.

The excitement doesn’t stop with Phelps. 2012 Olympic silver medalist Cullen Jones will take on the men’s 50 free field. Some other exciting swimmers to watch in this event include Caeleb Dressel, Michael Andrew, and Josh Schneider.

On the women’s side, there’s been a lot of buzz around Katie Meili, who set the Pan American Games Record at 1:05.64 this year, a time that would’ve won gold in Kazan. The 50 is headlined by Madison Kennedy, but look for Kelsi Worrell to improve her time through prelims. Finally, 2012 U.S. Olympian and 2015 Pan Ams champion Caitlin Leverenz will lead the heats in the 400 I.M., but she’ll be challenged by NCAA Champion Sarah Henry.

The women’s 100 breast prelims were a runaway from USA National Teamer Katie Meili. She put up a very strong 1:06.56 in prelims to qualify 1st for the final. Meili will look to make a statement tonight after putting up the 3rd fastest time in the world for 2015 last month.

Behind her, the next 7 qualifiers for the championship final were in the 1:08 low-mid range. Australia’s Jessica Hansen (1:08.04) and the youngest swimmer in the field, Lilly King (1:08.16), will swim to Meili’s sides tonight.

Laura Sogar, former NCAA Champion in the 200 breast, took the 4th spot for finals. She swam to a 1:08.21 just ahead of Alabama’s Bridget Blood. Blood dropped over a second off her best time to finish 5th overall at 1:08.26.

But he won’t lead the field heading into finals. That position went to Jack Conger, the only man to swim sub-52 this morning. Conger’s 51.97 bodes well for his swim tonight. He dropped over 1.5 seconds from prelims to finals yesterday in the 200 fly, and looks to be in great form.

Swim MAC’s Matthew Josa was the 3rd fastest qualifier, clipping his best time by .02 to finish in 52.21. He was just ahead of David Nolan (52.46). Nolan swam a best time this morning in this event for the first time since 2013. After an incredible breakout in the NCAA season with an American Record in the 200 I.M., he’s still looking for that big long course breakthrough.

Some notable young swimmers will compete in the B and C finals tonight. Pro swimmer Michael Andrew qualified 16th with a 53.36. Maxime Rooney, rising star and national champion in the 200 free, qualified for the 18 & under heat with a 54.45. Andrew Seliskar (53.78) and Ryan Hoffer (53.58) will challenge him in that heat.

Kelsi Worrell showed off her sprint talent this morning, narrowly missing her best time. She clocked a 25.28 for 4th. She’s been a 25.12 back in June of this year, but look for her to make a move into the top 3. She’s already had a very impressive showing in the 100 fly and 100 back this week.

Auburn-based sprinter Allyx Purcell from Australia will take the 5th seed headed into finals. She dropped her time by half a second to post a 25.38. She was just ahead of 17-year-old Amy Bilquist, who clocked a 25.41.

The questions were raised when Caeleb Dressel struggled in the 200 free yesterday. He was slower than he’d been in season. So what did that mean for his key events, the 50 and 100 freestyles?

As usual, Josh Schneider and former American Record holder Cullen Jones were very close in their times. They swam in different heats, but Schneider bested Jones by just .01 in prelims. They recorded times of 22.10 and 22.11 to take the 2nd and 3rd seeds.

Michael Chadwick swam a best time to take the 4th seed in 22.25. He was narrowly ahead of Wyatt Ubellacker, who dropped half a second to hit the wall in 22.27.

William Copeland (22.46) grabbed the 6th spot in finals. There was a tie between Michael Trice and Kyle Darmody (22.52) for 7th place to close the lanes for the championship final.

Caitlin Leverenz looked very good this morning in the final heat of the 400 I.M. She took an easy win to top the prelims in 4:41.76. Leverenz’s best time is leagues ahead of anyone else entered at this meet, and she’ll have to swim close to that if she wants to assure herself the win over Sarah Henry and Madisyn Cox.

Henry cruised through the front half of this race, making up ground through the breast and freestyle legs to qualify for the final in 4:42.84. She ran out of room, however, to catch Cox. Cox stormed to the finish of their heat in 4:42.43, dropping nearly 3 seconds off her best time.

Bethany Galat won the first of the circle seeded heats, and was the only swimmer from that heat to advance to the final. She was 7th in 4:45.76. Mia Nonnenberg took the 8th spot in 4:46.25.

Bonnema took the win in the head-to-head race, clocking a 25.08. That time, if she’d swum it in prelims, would’ve easily made the top 8. She’ll still get a chance to swim again tonight in the B final.

Yikes! Phelps has his work cut out for him tonight.

Yikes. I guess the message he sent was received and thoroughly answered.

Good time from Nolan. Hoping for a good 200 IM

I’m glad that MA can swim fast in finals, but he’s going to have to learn how to go in the morning. He’s knocking on the door of that elite level that can coast into A-finals, but until then, he’s gonna keep having to fight for 9th in the evening.