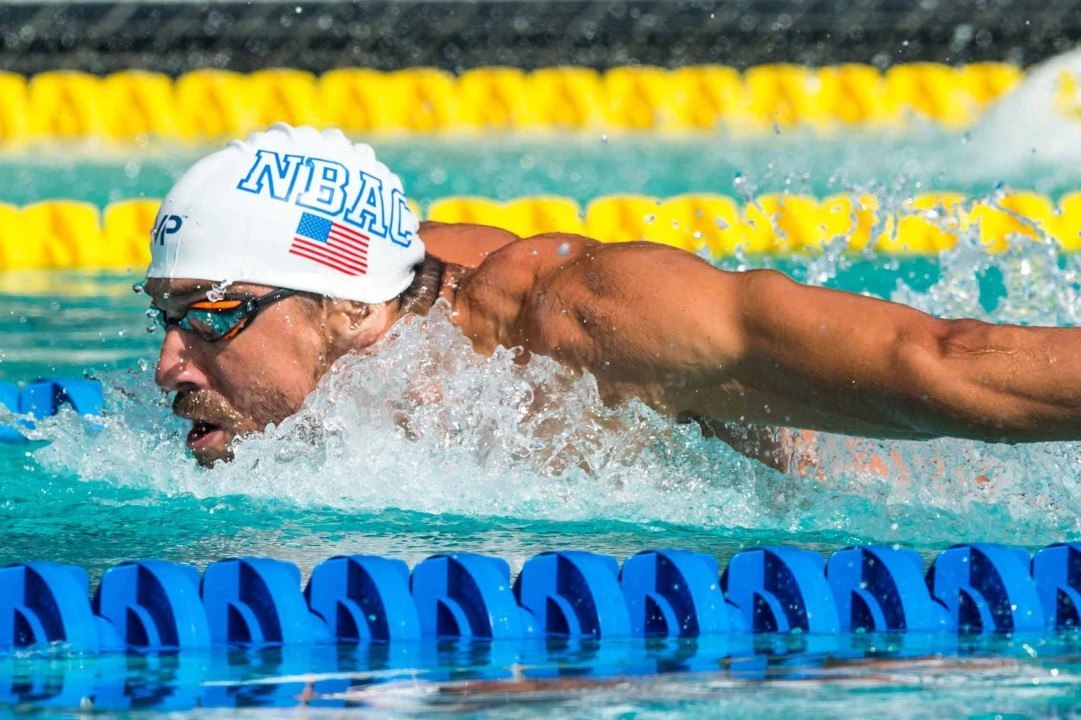 Tonight, Phelps will be looking to get into the 1:53-range and Conger will be looking to grab what could potentially be his second podium finish of the night. Phelps hasn't lost this event at US Nationals since the 2000 Olympic Trials. Archive photo via Mike Lewis/Ola Vista Photography

This morning’s prelims session sets up a fantastic finals tonight which marks the return of Michael Phelps to the 200m butterfly final at US Nationals.

Although Phelps performance is set to be the highlight of the night after he put up the 10th fastest time in the world this year in prelims, there are some other extremely stellar performances to look forward to.

The first big performance of the night will come in the women’s 100m backstroke. Kelsi Worrell of Louisville who has been absolutely dominant in the 100m fly all season which includes a national championship victory from the first night of competition, will be one of the top swimmers in the 100m back final.

Not known for her backstroke swimming, Worrell dropped a 1:00.38 this morning to qualify for finals. She’ll be up against 17-year-old Claire Adams who was a 1:00.08 and Georgia Davies who rocked a 1:00.11 to take the second seed behind Adams. Throw in Ali Deloof and Worrell will have three tough girls ahead of her that she’ll need to beat if she wants to snag another podium finish.

With Jack Conger out of the men’s 200m freestyle Blake Pieroni, Frank Dyer, and Maxime Rooney among others will be in the hunt for the gold medal.

With Serbian national teamer Arkady Vyatchanin out of the men’s 100m backstroke. it looks as though Japan’s Junya Koga and Ameircan Nick Thoman will square off for gold. Thoman is coming off a gold medal performance at the Pan American Games in the 100m backstroke, and won’t want to lose this race on home soil.

Defending 200m freestyle Olympic champion Allison Schmitt will be the top swimmer in the women’s 200m freestyle. After winning gold at the Pan American Games in July, Schmitt proved that she’s back in top form as the Rio Olympic approach. Tonight will show if Schmitt can put up a time similar to what’s being swum at the 2015 World Championships in Kazan. Hali Flickinger, Sarah Henry, Katie Drabot, and Madisyn Cox are some of the few who will join Schmitt in the final.

The men’s 200m butterfly is all about old vs new. Jack Conger went head-to-head with Phelps this morning in their heat to finish just over a second behind him and take the second seed heading into tonight’s final. Tonight, Phelps will be looking to get into the 1:53-range and Conger will be looking to grab what could potentially be his second podium finish of the night. Phelps hasn’t lost this event at US Nationals since the 2000 Olympic Trials.

Claire Adams came away with a huge win in the women’s 100m backstroke, dropping under the one-minute barrier in order to put up a 59.58. That time for Adams is the ninth fastest time in the world this year in the 100m backstroke and ranks as the fourth fastest 100 back ever from an American in the 17-18 age-group.

The 17-year-old entered the meet with a personal best of 1:01.12, but shattered that in prelims with a 1:00.08 to take the top seed. Taking another half-second off her personal best, Adams has improved by a total of 1.54 seconds at this meet.

Finishing second was Georgia Davies who was the only other swimmer in the field to crack the one-minute barrier. The British swimmer was a 59.93 at the touch, well behind Adams.

Third overall was Ali Deloof from Club Wolverine who rocked a 1:00.35 a the touch. She just secured a podium finish with that time as Louisville’s Kelsi Worrell and her touched almost simultaneously. To the naked eye, it appeared they were tied however the scoreboard revealed that Worrell was a 1:00.38, missing the podium by just three one-hundredths of a second.

Maxime Rooney turned first at every wall and managed to hold on for the victory in the men’s 200m freestyle, becoming a national champion at just 17. At the touch Rooney just held off a charging Zane Grothe clocking in at 1:47.10 to Grothe’s 1:47.11.

Rooney’s national championship victory comes just after being named the US Jr National Champion in the same event. He’s shown drastic improvement since last year where he was a 1:51.92 at the 2014 US Summer Nationals.

That time for Rooney is the second fastest performance from any American swimmer in the 17-18 age group ever. The only swimmer in that age group to be faster than Rooney was Olympic legend Michael Phelps who holds the record at 1:45.99 from 2003.

Behind Rooney and Grothe was Blake Peironi. Peironi was right in the mix with the two leaders touching in for bronze at 1:47.30. With Peironi rounding out the top three it left Townley Haas to settle for a fourth place finish with a time of 1:47.55. That time for Haas is the third-fastest 200 freestyle ever from an American in the 17-18 age group. Only Phelps’ 2003 time and Rooney’s winning time from tonight are faster.

Junya Koga of Japan and Nick Thoman both moved way out in front of the rest of the field with just 25-meters remaining in the race. The two were locked in a tight battle for gold, and at the touch the scoreboards revealed that Koga had pulled through with the win.

With Koga’s winning time he ironically ties Thoman as the 11th fastest man in the world this season in the 100m backstroke. His 53.20 from tonight matched Thoman’s 53.20 from the 2015 Pan American Games where he took home the gold.

With Koga and Thoman way out in front, the battle for bronze was tight. Luke Kaliszak ended up taking the podium position with a swift 54.23. In order to do so he beat Taylor Dale by just over two-tenths of a seconds as Dale finished fourth in 54.44.

Behind Dale was Jacob Pebley of Cal and Kyle Darmody.

Defending Olympic champion and American record holder Allison Schmitt came through with her first US National Championship title since the 2012 Olympic Trials. Touching in for gold at 1:56.91, Schmitt separated herself from the rest of the field beating second place finisher Hali Flickinger by over a full second.

Schmitt led the race from start to finish, falling just short of her winning time of 1:56.23 from the Pan American Games that the swam earlier this season which ranks her 10th in the world.

Flickinger was second in 1:58.18, beating bronze medallist Katie Drabot by four-tenths of a second. That time for Flickinger is a personal best, bettering the 1:58.54 that she swam in prelims this morning. Heading into the meet Flickinger had never been under two-minutes in the 200m freestyle.

Drabot also swam a best time tonight in order to medal, touching in for bronze with a swift 1:58.58. That time is just slightly bettered the 1:58.73 that she swam at the 2014 Junior Pan Pacific Championship.

Michael Phelps is back.

Read that again, Michael Phelps is back.

If there was ever a doubt in anyone’s mind that Phelps would return to the 200m butterfly and rock it, Phelps proved them wrong with an incredible 1:52.94 performance.

That’s the fastest time in the world this year. That’s faster than he was at the 2012 London Olympic Games. That’s the first national title Phelps has won since the 2012 Olympic Trials.

Phelps went off to his winning ways in the event early, taking the lead right from the get-go and never relinquishing it. At the touch, he finished well ahead of all his competitors with the closest being Jack Conger in 1:54.54.

Conger came back hard on Phelps towards the end in order to put up the seventh fastest time in the world this year. Both Conger and Phelps were well ahead of bronze medallist Clark Pace who ended up finishing over three second behind Conger, and almost five behind Phelps with a 1:57.83.

The Louisville women managed to win the women’s 4x100m freestyle relay giving butterfly standout Kelsi Worrell her second championship title of the meet thus far. Worrell led off the relay in 54.73 to put up the fastest split of the evening.

pause the 200 fly race video anywhere from 2:00-2:07. a little subliminal foreshadowing – the GOAT, all others in his shadow

Pretty solid night of swimming. Conger looked good… but man this guy is always 2nd. I get that this one was not likely… but jeez.

I am as hard on Conger as anyone else, although let’s be honest my opinion isn’t important, for not getting his hand on the wall first. That being said, it is only because I see him and a few select others as the future once Phelps and Lochte actually retire.

That being said, even over his short course American record, I think this is a statement swim for him. Think he will do amazing things in the 100 as well. I know this sounds crazy but I could see two under 51. And that makes this event crazy as Shields will be around or under 51 as well. This feels like Conger’s coming out, even though he finished 1.5… Read more »

haha “And the look on Michael’s face says it all. He gives it a little WOOOOOOOOO!”

Always with a negative spin. What does the 4×100 have to do with anything?

Actually I was trying to answer Wildbill, but being on the cellphone at that time for some reason I can´t “reply” directly to the persom

Congratulations to Michael Phelps. He put in a lot of work. He must have wanted it pretty bad. He is an example of Commitment to Excellence. 100% commitment. Body, Mind, and Spirit. Eat, sleep, and dream swimming! Nothing less will make a champion.

GREAT interview. Great! Thank you, PVDH for posting the link.

I can’t remember the last time he’s seemed so excited over a time he swam. He’s been happy with places, because he’d ya know, win Olympic gold medals and whatnot, but never happy with how fast he’d gone.

Woot. This is good. This is very good.