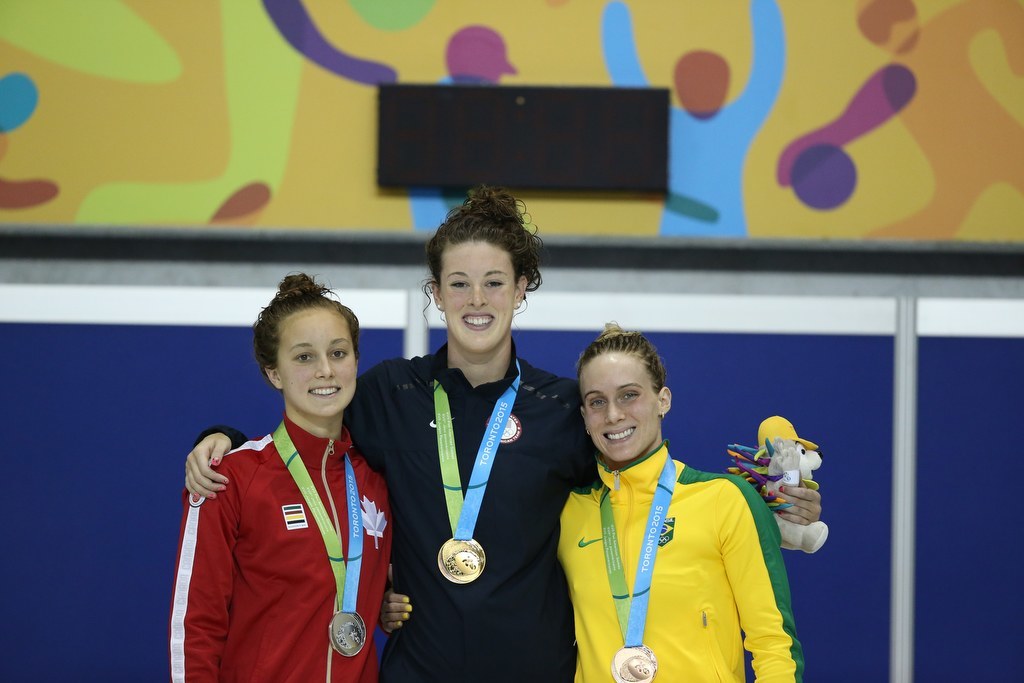 Day One of the 2015 Toronto Pan American Games got off to an intense start, with all sorts of records falling and fantastic racing taking place. Tonight, Day Two finals might just have outshone yesterday. While the hometown Canadians continued to demonstrate a new vigor in their racing, taking 1-2 sweeps in the women’s 200 breast and 200 back as well as a couple other medals to boot, the Americans finally broke through for two individual golds. Brazil, too, was dominant, highlighted by their three golds on the night.

Similar to Day One finals, a whole slew of records came crashing down tonight. In each A final tonight, a Pan Am Games record went down, save for the men’s 200 back. Funny enough, gold medalist Sean Lehane (USA) had taken down the record during prelims and nearly did it again in finals. In addition to all of these meet records, a host of national records went down. Below is a list of each national/continental record broken tonight, with the new record being shown at the end of each bullet point.

Add those records to the eight Pan Am records being reset, and you’ve got yourself quite a day. We’ve recapped finals from Day Two right here. Tomorrow, just two individual events will take place for both men and women: the 400 IM and 100 fly. In addition to those events will be the prelims of the women’s 800 free relay. Let’s take a look at what to watch out for tomorrow during prelims.

The women’s 400 IM is scheduled for just two heats, but each will feature some great racing. American Caitlin Leverenz, who won bronze at the 2012 Olympics in the 200 IM, is in lane four and will feel the heat from Brazil’s Joanna Maranhão, who owns a slew of Brazilian and South American records herself. Maranhão is no stranger to the big stage; the 28-year-old has been a versatile force since the 2004 Olympics. She grabbed bronze in the 200 butterfly on Day One of these games with a new best and thus a new Brazilian and South American record, breaking her best time from back in 2009. Her 4:40.00 best time in the 400 IM is from way back in 2004, but the seasoned swimmer will look to come close to that to stick with Leverenz and put herself in an inside lane for the A final.

While Leverenz and Maranhão are expected to duel in the first heat, Canadian youngsters will be jockeying for lane 4 in the A final in the 2nd heat of prelims. Emily Overholt, just 17 years of age, won the silver medal in the 200 free tonight behind only Allison Schmitt, and was under Sippy Woodhead‘s old meet record as well. Overholt has been cranking out world class times in the mid-distance free and the IM events lately, and she’s got the top seed for the 400 IM. Her country mate Sydney Pickrem, who lives in Florida but represents Canada internationally, is just a few months older than Overholt. At 18, she’ll be right next to Overholt in heat 2 of the 400 IM, and the two Canadians will be up against Kate Mills of the USA. Mills had a big swim in the 200 fly yesterday, edging Maranhão for the silver medal and ultimately notching her two best times ever (at the age of 26) in the event in prelims and finals of that event. She’s seeded with a 4:44, but after seeing the confidence in her 200 fly, she will be a force in this race, too.

For the U.S., it’ll be Kelsi Worrell to watch for. She’s in the middle of the pool in heat 1, though her seed time of 58.24 is expected to be blown right past. Worrell absolutely dominated this year at NCAAs, winning the 100 fly (in yards, of course) with a time of 49.81 to become the first woman to break 50 seconds in the event. With the future of American butterfly somewhat in disarray, what with the coming and going and then coming again of World Record holder Dana Vollmer and the torch currently in the young hands of Kendyl Stewart and Katie McLaughlin, Worrell will be gunning for a middle lane in the A final tomorrow night to establish herself as an elite American butterflier in the big pool. She already has impressed with a 54.0 relay split from prelims of the 400 free relay, and we’ll see if her butterfly is in even better form tomorrow.

Of course, Canadian record holder in the 50, 100, and 200 butterfly, Katerine Savard holds the top seed in this race with a 57.27. Savard finished 2014 ranked as the 5th fastest 100 butterflier in the world, and she has plenty more international experience than Worrell. Savard should have help from country mate and 2nd seed Noemie Thomas in this event, though Thomas scratched the 200 fly yesterday due to illness. A pair of Brazilian butterfliers, Daiene Dias and Daynara De Paula, are also expected to put up strong times and contend for medals in the A final.

The top five seeds in this event come into the race entered with times under 53 seconds, with American Giles Smith (52.02) leading the way. The next four seeds are entered with times between 53.00 and 53.15– it’s going to be a close one. Some names to watch out for in prelims tomorrow, other than the top three seeds (Smith, Thiago Pereira, and Arthur Mendes), include: Canada’s Santo Condorelli and Peru’s Mauricio Fiol.

Condorelli grabbed the silver medal in the men’s 100 free yesterday, and then came back to lead-off Canada’s 400 free relay in a world-leading time of 47.98. The rising USC junior has been training with renowned sprint coach Coley Stickels, and the work is definitely paying off– Condorelli’s previous best before this meet was a 48.83 from the 2015 Canadian Swimming Trials in April, and before 2015, he had never been under 49 seconds.

Check back here tomorrow morning for a live prelims recap of Day Three prelims, and be sure to follow @SwimSwamLive for live updates as the morning session rolls on.