2015 M. NCAA Picks: 200 Medley Relay Up for Grabs, but Schooling Might Make the Difference for Texas 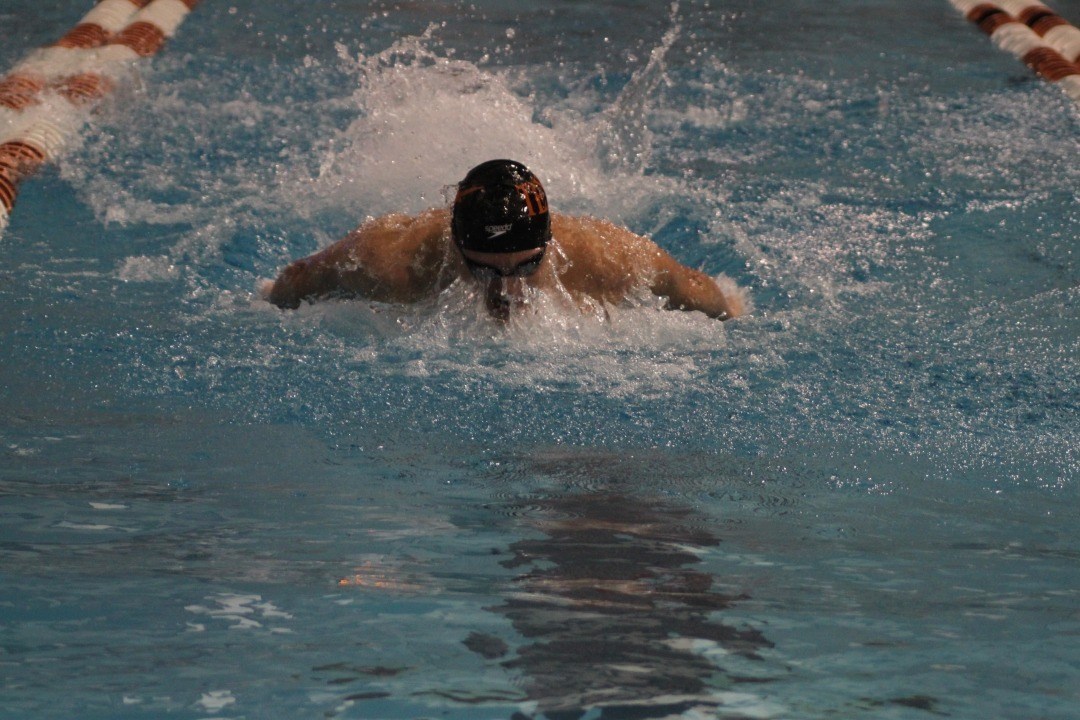 Joseph Schooling (above) split a 19.66 at Big 12s swimming butterfly on Texas' A relay. Current photo via Andy Ringgold/Aringo Photography

Cal’s well-rounded medley relay last year took down the American Record en route to an NCAA title, with no real “weak” leg of the four. While the Golden Bears did lose Tony Cox to graduation, who happened to split a 19.99 on the fly leg in finals last year, freshman Justin Lynch is a fantastic butterflier that should be swimming the fly leg of this relay. While Lynch hasn’t been stunning this season, he was 20.32 on the fly leg at Pac 12s. What’s more is the Ryan Murphy factor; the star sophomore seems to have much more in the tank come next week. Chuck Katis and Tyler Messerschmidt will each need to be stellar though, because even if underclassmen Lynch and Murphy are on, the Golden Bears have been slower than four other teams so far this season.

Despite Michigan’s slow descent from their 2013 team title, they have managed to put up the fastest time in the country this season by almost half a second. Two freshman, Aaron Whitaker and Paul Powers, were impressive bookends for the Wolverines at Big Tens (more so for Powers, who anchored in 19.00), while Bruno Ortiz sprinted to a 22.77 breaststroke split. Jeremy Raisky, a junior, turned in a 20.15 on the fly leg and Michigan won the Big Ten title by over a second and a half. There’s no telling how newcomers Whitaker and Powers will do at their first NCAAs, but Ortiz has proven time and time again that he’s capable of showing up when it matters.

Michigan is one of many traditional power programs that have posted top times this season. Texas follows up right behind Michigan, having been 1:23.88 this season. As we all know, butterfliers grow on trees in Austin, but Joseph Schooling made a mark at Big 12s after exploding for a 19.66 split on the Texas A relay. It’s going to be very hard for anyone to come very close to Schooling on that split. Kip Darmody should be back on the backstroke leg after his sub-21 lead off last year, and the freestyle leg will go to whoever is the hottest come NCAAs– possibly Matt Ellis or freshman Brett Ringgold. Sprint freestyler John Murray was a 23.45 last year at NCAAs on the breast leg. Like Cal last year, there really is no glaring “weak” leg for the Longhorns, and coupled with Schooling’s ability to put down 19 mids butterfly, Texas is the favorite to win this event (if only slightly).

Other traditional power programs include #4 Tennessee, #6 USC, and #8 Georgia. Tennessee has three solid upperclassmen legs plus freshman Peter Stevens, who dropped a 22.72 breaststroke split at SECs and helped them to win the conference title in this event. Stevens, who swam a faster on his breaststroke leg than his freestyle leg in his 200 IM at SECs, lives and breathes for the 50 breast. He will be the key to the Volunteers’ success at NCAAs. Georgia finished 3rd at SECs, with impressive splits from Taylor Dale and Nic Fink on the back and breast legs, respectively. They’ll need more from Ty Stewart on the fly leg, though, as a 21.05 likely won’t cut it. The Trojans have found their anchor leg in Santo Condorelli, who dipped below 19 on their 2nd place Pac 12 relay, and have breaststroke options between Sergio Lujan-Rivera (23.96 on the USC B relay) and Morten Klarskov (24.08 on the A relay). Meanwhile, Luca Spinazzola and Ralf Tribuntsov both were 21 low in the 50 back at Pac 12s, and Dylan Carter put down the fastest fly split (20.21) in the entire field.

That leaves us with two non-traditional power programs in the top 8 so far this year: #3 NC State (1:24.07) and #7 Alabama (1:24.43). NC State, known best for their sprint freestylers, put together a fantastic relay at ACCs, with a 21.30 lead off from Andreas Schiellerup, a 23.72 from Derek Hren, and a 20.50 from Soeren Dahl. Rounding things out was David Williams with a 18.55, really hammering it down for the Wolfpack. Alabama went their 1:24.43 to finish 2nd at SECs and have put up the 7th best time in the country– all without defending 50 free NCAA Champion Kristian Gkolomeev. Freshman Luke Kaliszak is an appropriate replacement for Brett Walsh on the fly leg, as Walsh moved to the free leg. It’s unsure whether they will go with Anton McKee on the breast leg as he was subbed out for Pavel Romano at SECs, but Connor Oslin is back on the backstroke leg this season and almost went under 21 at SECs. Both of these teams have been making tons of noise this season, but time will tell if they can live up to the hype.

Just outside of the top 8 are perennial forces Auburn and Florida. Both teams placed top 8 last year and don’t have to make huge overhauls due to graduations. Auburn decided to keep Kyle Darmody off of this relay in order to use him on the other 4, but if they decide to sub him in, the Tigers would start to look very strong to move into the A final. Florida’s relay features Caeleb Dressel, and while they don’t have the speed on the front half of their relay, this is a team that always shows up big for NCAAs, and we wouldn’t be surprised to see a sub-20 fly split from the young sprint star Dressel.

Dark Horses: Missouri (14th seed, 1:25.09). The Tigers will be sure to get a big breaststroke split from Sam Tierney, while Matthew Margritier is an emerging sprinter who nearly dropped a sub-19 split at SECs. Missouri won the B final last year and will look to move up into the A final this year.

First off i said they were contenders not that they would win it for sure. Regarding your other points:
Connor Oslin and Kristian Gkolomeev were actually both significantly faster at NCAAs last year than they were at SECs. I’ll just toss some facts your way.

It’s also just dumb to think Gkolomeev won’t at least be 18 low. 18.64 flat start is 18.4 with a bad relay start. Also keep in mind he hit 18.6 twice in one night so it’s not like he struggles with consistency.

Haha I guess we have different definitions of the word low. I view being “low” as .3 and down, “mid” as .31 to .69 and “high” as .7 up. I did not know he dropped time from conference to NCAAs last year, good to know. However, your mention of consistency, really only applies to that meet. He swam pretty close together times in the same meet, impressive, but also does not mean much in the long run. Now David Nolan has long run consistency.

Also keep in mind, there is a physical limit to human ability. No one has ever been 18.6 without a super suit.

Top 8, ok I will give you that, but title contender I still disagree.

Both Morozov and Gkolomeev went their flat start 18.6s in jammers. I hope you meant 18.4 or 18.5…then you would be correct.

You are se seriously mistaken if you think Alabama won’t make the top 8. They could even contend for the title. Connor Oslin is the fastest guy in the country in the 50 back going into the meet. McKee’s best breaststroke split is 23.2 and I’m speculating the reason he was left off it at SECs was due to uncertainty over his recovery from the broken collarbone….not to mention they have a 17 high 18 low freestyle leg guaranteed.

Wowy buddy, seriously? The title? They do have impressive guys but here are things to keep in mind:

1. Re-tapering from a full taper is very hard- it is not unusual for schools of “lower” (quotes because they are still very good but not team title contenders) caliber to fully taper for Conference where there are less teams, less competition, and familiar opponents, and perhaps also perhaps more pressure from school athletic program to do better at that level.

2. They will definitely not have the number one backstroke 50 at nationals. Texas out guns them in backstroke, not too far behind in Breaststroke, way ahead in fly, and will put up a solid 50 free

Non-americans on a relay record time

Just a quick question: How can the NCAA and US Open record be faster than the American Record?
Thanks!

Because the Ortiz brothers are not from America.

i’d like to see princeton get some love when talking about this relay. they’re tied with florida at 1:24.95 going in. harrison wagner split 18.8 on that relay and has been 18.6 in the past, which not many teams can match. they should be a dark horse to make top 8.

We’ll find out soon if you are right… I doubt they make top 8.

Texas wins, unless Murray “goes”: for negative reaction time. I plan to tweet some New Age calming down music links to John before the relay. I think Murray swims 50 breast.

I thought Temple swam faster than 22.9 for the relay at Big12s? Too lazy to check that now.

A year ago, 23.45 was a really strong breaststroke leg for Texas. This year, I’m not sure it will be. Breaststroke is getting out of control fast.

Texas might be deep enough to put TWO relays in the A final, if they were allowed to.