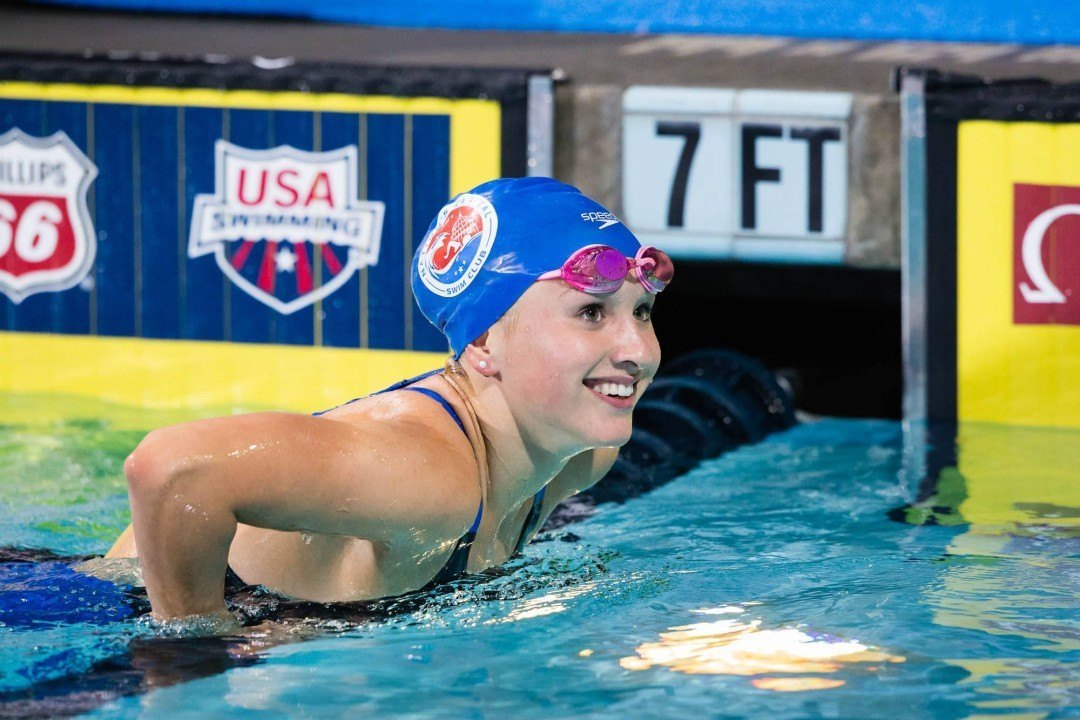 Team USA came out in front of the prelims of the women's 100 fly with a 58.87 by Cassidy Bayer. That's a new best for Bayer, who came into the meet with a 59.00 from 2015 U.S. Nationals. Archive photo via Tim Binning/TheSwimPictures.com

Spajari’s teammate Felipe Souza took the top seed overall going into semifinals with his 49.64 that won heat 9. Vincent Dai was the 2nd fastest in that heat, qualifying 3rd overall in 50.02.

Team USA’s Sean Grieshop powered through heat 4 to take the top seed for finals, finishing in 4:18.19. He was well ahead of anyone else in prelims, as Spain’s Hugo Gonzales finished behind him in the heat to take 2nd overall with a 4:21.12. Also in that heat, USA’s Charlie Swanson (4:22.77) was the 5th fastest overall.

Brazil’s Brandonn Almeida, the Junior World Record holder in this event, cruised through to win heat 5 of prelims. His 4:22.67 was good for 3rd overall after he overtook Russia’s Nikolai Sokolov (4:22.75) on the freestyle leg.

Australia’s Shayna Jack was narrowly behind Ustinova in heat 7 to take 3rd overall in 25.54. Ashley Volpenhein from Team USA cracked 26 in that heat to take 8th overall, clocking a 25.97. She out-touched Canada’s Penny Oleksiak (26.0), who made semis here after the 100 fly just minutes earlier.

Also qualifying for her 2nd semifinal in this session was Rikako Ikee. The Japanese sprinter won heat 6 with a 25.68 just ahead of China’s Yuting Tang (25.74)

Just .07 seconds separated the top 3 finishers in the 50 breast prelims. Croatia’s Nikola Obrovac came out on top with a 28.11. He was the smallest of margins ahead of Lithuania’s Andrius Sidlauskas (28.12). Anton Chupkov, who has dominated the breaststroke races so far at this meet, clocked a 28.19 for 3rd overall.

Swimming with Obrovac in heat 6, Italy’s Nicolo Martinenghi claimed the 4th seed with a 28.22. China’s Shen Hao (28.45) was just behind them. Charlie Attwood (28.52) was behind Sidlauskas and Chupkov in heat 7 to grab 8th headed into semis.

Winning heat 5 to take the 5th seed overall at 28.28 was USA’s Michael Andrew. His teammate Reece Whitley (28.62) finished 3rd in that heat to take 9th overall. Finishing in between them was Turkey’s Huseyin Sakci (28.49).

China, Brazil, and Germany will also compete in the final.

There were 2 women under 16:40 in the early heats of the women’s 1500. Canada’s Olivia Anderson had the fastest time, coming in at 16:37.03. Anderson was trailed closely by Hungary’s Janka Juhasz all the way through heat 3. Juhasz posted a 16:38.31 for 2nd overall this morning.

Because this is a timed final, if someone falls short of their seed time tonight at finals and posts a time slower than Anderson and Juhasz, they will move up in the overall rankings. On paper, it looks like it will take a 16:35.03 to make the top 8. That time belongs to Russia’s Anastasiia Kirpichnikova.

His relay split have been all over the place. I am guessing 48.8

I’m pleasantly surprised. Didn’t expect that from Cassidy after her 200 fly and 50 fly bad performances.
Cool. Hopefully she can win a medal tomorrow.