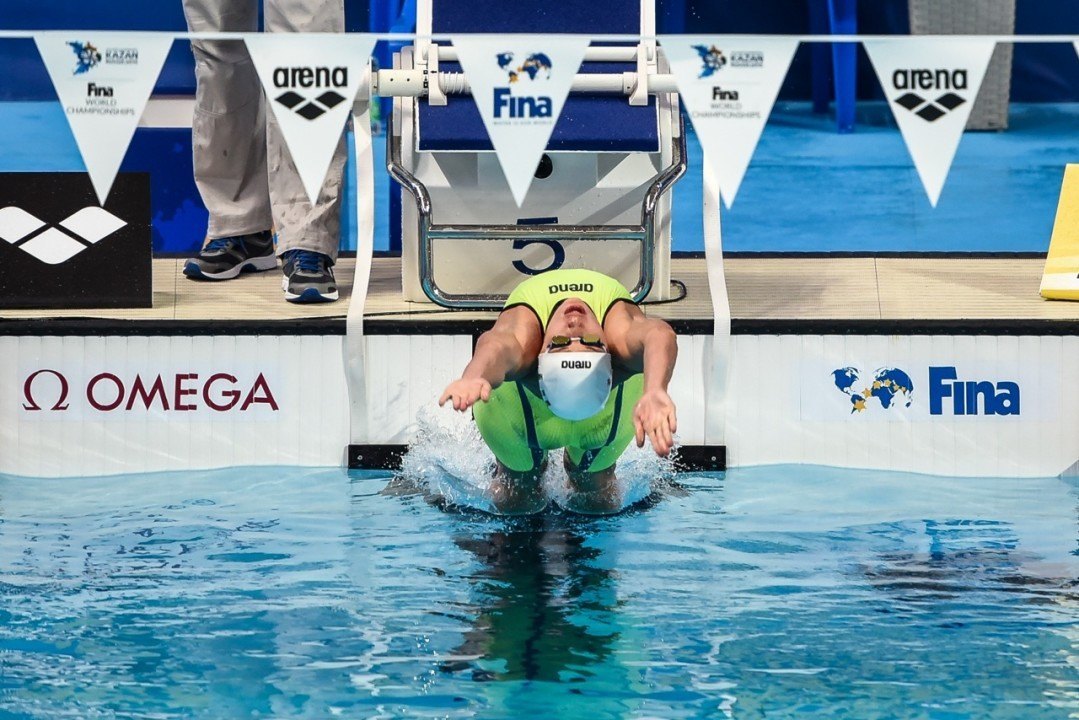 Katinka Hosszu is entered in three events this morning, including the 200 IM, an event she holds the World Record in. Current photo via Peter Sukenik/www.petersukenik.com

Italy’s Matteo Rivolta came off a new national record in the 100 fly to pace all competitors this morning with a 22.83. He will have plenty of competition in the semifinal round though, as he is closely followed by Russia’s Aleksandr Popkov (22.85) and Belarus’ Yauhen Tsurkin (22.87)

Hungary’s Katinka Hosszu powered past the competition to easily post the top time of the morning at a 26.48. Considering she has dipped under 26 seconds before and has already been on fire all week, expect her to improve in the subsequent rounds.

Lithuania’s Mindaugas Sadauskas cut nearly a full second off his seed time to pace all competitors with a 47.18. Notably, he also established a new national record in the process.

Poland’s Sebastian Szczepanski also looked good this morning with a 47.30 out of Heat 5, while Belarus’ Artyom Machekin joined in the record-breaking frenzy with a 47.44 to set a new national record as well.

Notably, Russia’s Sergey Fesikov did not compete in this event this morning. It took a 48.22 to earn a second swim.

Katinka Hosszu looked VERY comfortable en route to posting the top time this morning at 1:53.39. Her first 100 split (55.15) was less than a half second off Sweden’s Sarah Sjostrom’s pace during her world-record-setting race last year at Worlds, when she posted a 54.66 first half to her race.

Also out fairly quick was the Netherlands’ Femke Heemskerk, and her 1:53.49 foreshadows the battle that she will have with Hosszu in the final. Hosszu will have mutliple swims tonight, and though she has never been one to shy away from the challenge of racing multiple semifinal and final races in one night, that may give Heemskerk an edge tonight.

Denmark’s Jeanette Ottesen opened up a commanding lead early on, and she would never relinquish it en route to posting the top time of the morning at 56.50. Considering she didn’t really have anybody to race, it can be expected that she will get faster as the field tightens up tonight.

Sweden’s Sarah Sjostrom also led her heat from start to finish, and she was the only other swimmer to dip under 57 seconds with her 56.70 effort. She was noticeably long on all of her walls, but it is very likely that she just did enough to win her heat.

Russia’s Sergey Fesikov took advantage of the extra rest he got from scratching the 100 free to easily post the top time of the morning with a 52.18. Fesikov entered the meet with a seed time of 51.35, so he still may have plenty of speed left to show off tonight.

British veteran  Liam Tancock looked equally impressive out of the second-to-last heat with a 52.58 to become the only other swimmer to dip under 53 seconds this morning, Tancock’s signature backstroke speed fueled his early push, and he never looked back en route to securing a middle lane for tonight.

Katinka Hosszu was well off her personal best, but was still able to comfortably lead all competitors with a 2:05.66. She was within a second-and-a-half of her own meet record (2:04.33) from 2013, but it is very unlikely that record will stand for long considering how good she has been at these Championships.

And…surprise! Russia, the country with the doping agency that covers up failed drugs tests, continue to dominate the sprint events. FINA, LEN; follow track and fields example and get them out!

Whilst understanding where you’re coming from, AT THIS POINT track and field is the one sport where there is clear evidence of doping cover-ups. Whilst its quite likely there may be other Russian sports federations implicated; at this point the condemnatory evidence is not yet to hand.

When or if that comes to pass, THEN you have grounds for suspension otherwise you have zero legal grounds for doing so. It may be the case in future that some international agreement/protocol may be put in place allowing for an across the board suspension for cases like we seem to have with the Russian anti-doping authority but as yet, no such policy is in place.

Agreed there IS a somewhat stronger case… Read more »

RUSADA (the Russian anti-doping agency responsible for doping control in multiple sports, including swimming) was declared non-compliant in mid November! They should be out, end of story!

What happened to France’s Govindin in the 50m fly heats? After recording a 23 high long course earlier this year you’d expect a 22 high or at least a low 23 in short course meters, but somehow he only managed 25.2 this morning and looked horrible. Very strange.

Katinka won’t take part in the 200 free final. In my opinion it’s the right decision because this way she has huge chances to win two more gold medals today in 200 medley and 50 back.

I so appreciate these stories, & am considering subscribing to the print magazine. I do not mean to be critical, but rather help SwimSwam maintain the highest level of professionalism. After being part of this online community for some time now & having read hundreds of articles online here (my site of choice, particularly after the Katinka Hosszu article in August by another site that shall not be named), the question remains for all published pieces – does anyone proofread these first? There are numerous typos & inaccuracies (see Hosszu & Heemskerk WOMEN’S 200 FREESTYLE paragraph above – “Katinka Hosszu looked VERY comfortable en route to posting to the top time this morning at 1:53.39. Leading from start to finish,… Read more »

I appreciate the criticism, and I apologize for the inccuracies. I was a bit rushed with the recaps this morning because I was trying to keep up with national records as well. Also, this laptop’s keyboard is not very cooperative at times. =)