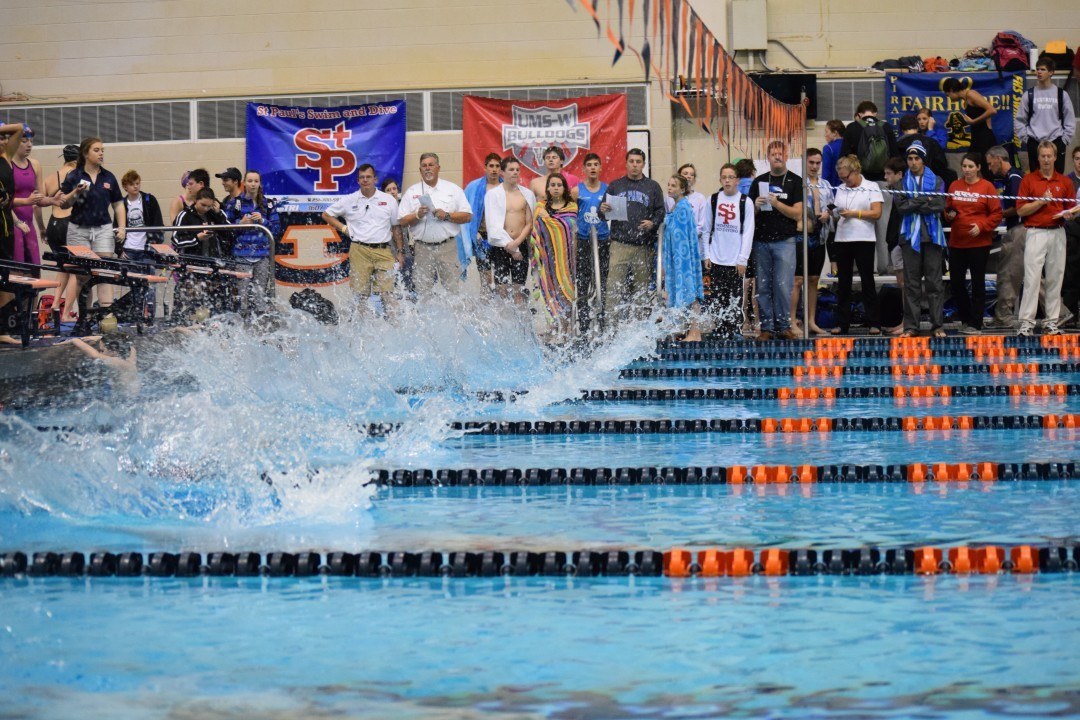 Auburn High School Girls lower their own 400 free relay record in addition to capturing several other top seeds in the prelims of the AHSAA Championships. Current photo via Stephen Parsons

The 2015 AHSAA Swimming & Diving State Championships began its preliminary session Friday at Auburn University’s James E. Martin Aquatic Center in Auburn, AL. The meet runs December 4th-5th and features both short course sessions over the two days. Alabama high school swimmers began their event lineup Friday afternoon while the diving participants gathered during the morning for their competition. Historically, Grissom High School leads the all-time most championships record with their boys at 15 and their girls at 18. The girls of Auburn High School have claimed the 6A-7A state title the past two years and haven’t graduated a single athlete. Their chances for a three-peat look strong as they secured the top seeds in all three relays. Bob Jones boys seek to reclaim another 6A-7A title when they have to defend four first place seeds in Saturday’s finals.

Alabama high school diving kicked off the weekend with its only event, the 1-meter board. During the prelims diving, Opelika’s Conner Pruitt jumped to a strong lead with a score of 231.55. The 2014 state champion followed up with a 337.85 in the semis and clutched the final with a score of 498.40. Pruitt was followed on the podium by Zachary El-Fallah of Spain Park (391.70) and James Hughes of Grissom (357.10).

Reece Cooper, a freshman from Daphne, dove for 161.65 and edged the three-time state champion, Helen Legg, during the Girls 1 meter prelims. Legg would take over with her semis score of 243.75 and would claim her fourth consecutive diving state title with a 352.80. Grissom’s Emily Griffin jumped Cooper for second place with 320.45 over 312.45.

Fairhope’s Jackson Tunks wrangled the 200 IM in 1:53.41 and Spain Park’s Rachel Cunningham enjoyed an open field in her IM as she touched in at 2:04.88. Cunningham would also swim in one of the closest record breaking swims of the prelims session. Her 1:02.35 100 breast came within .22 of the 2010 state record, so she’ll be hard pressed to lower her time tomorrow in the finals to have a chance at that record.

Wyatt Harrison and Sadler Mckeen had a good race going in the Boys 500 free. McKeen was leading the pack until Harrison pressed the gas the last 100 yards to win top seed at 4:35.17 versus 4:35.84. UMS-Wright’s Paige Madden blasted a 4:56.75 in her 500 free to finish nearly 8 seconds ahead of her heat. Andrew Shea of James Clemens and Anna-Julia Kutsch of Atlamont got their respective first place finishes in the 50 free. Sarah Dalton Chambliss from Prattville’s recorded a 55.12 in the 100 fly and was just shy off second place finisher, Sarah Cimino’s state record.

McGill-Toolen Catholic High capped the last event with a top finish in the 400 free relay with a time of 3:15.40 to best Auburn and Huntsville.  To finish off the night’s prelim session, the Auburn High quartet of Dowdle, Anna Kate McGinty, Peyton Dowdle, and McAuley Parker clocked a 3:31.84 to break their own state record in the 400 free relay.