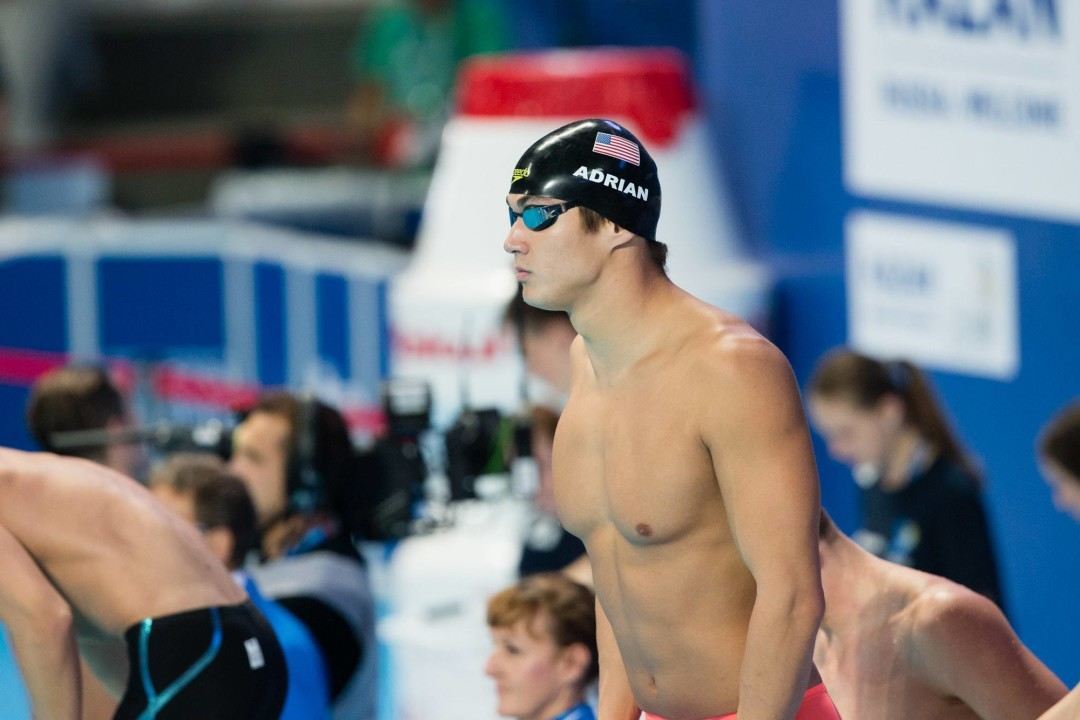 Nathan Adrian won the men's 100m freestyle event on today, Day 1 of the 2015 Duel in the Pool in Indianapolis, Indiana. Archive photo via Tim Binning/TheSwimPictures.com

*All are timed finals

Knowing Hungary’s Katinka Hosszu was diving into the water made everyone get on record alert, as the #IronLady has had a string of impressive swims throughout the year.  This included a SCM 400 IM World Record last week in Natanya, Israel competing at this year’s European Short Course Championships.

That newly-minted record was clocked at 4:19.46 and Hosszu was on pace with the mark through the first half of the breaststroke portion of tonight’s race.  She fell off pace slightly during the latter half of breast, but still fired off a huge 4:21.21 for first place and a new U.S. Open Record.  Her time tonight knocked off the previous U.S. Open Record of 4:24.37 that she set herself back in 2011.  Splits will be detailed in the separate U.S. Open Record post.

And USA fired back with a big win by crowd favorite Ryan Lochte, who surprised some by even contesting this event.  At 31 years old, Lochte hasn’t swum the event in recent history, but still holds the American and World Records in 3:55.50. He was well-off that mark tonight, but only into the breaststroke, as he split 53.89 for fly and 59.64 for back to stay on pace before falling off, yet still maintaining his lead. 4:02.78 was his final mark to give the stars n’ stripes 5 solid points with his victory.

Silver in the race went to Great Britain’s Dan Wallace, the former Florida Gator who won the long course version of this event at the 2014 Commonwealth Games.  Wallace touched in 4:04.10 tonight, followed by Hungary’s David Verraszto in 4:04.63.

Setting the water on fire at her 2nd Duel in the Pool was red-shirt Stanford Cardinal and USA National Teamer Simone Manuel.  The Netherlands’ 2012 Olympic double gold medalist, Ranomi Kromowidjojo led for the first 50 of the race, splitting 24.83 and USA’s Lia Neal was on her heels, splitting 24.96 for the only 2 sub-25-second splits of the first half of the race.

Neal was able to push through to the wall for second place tonight, registering a time of 52.08, while Dutch speed demon Kromowidjojo held on for 3rd in 52.28.  After this event, score is 17 points USA to 10 points Team Europe.

Team USA earned its 3rd consecutive win, with Nathan Adrian charging to the wall in a time of 46.57 for the victory. Adrian split 21.88/24.89 to clock the swiftest mark of the field. A field which included 5 sub-47-second times tonight. USA’s Josh Schneider cranked out a speedy 46.66, followed by Russia’s Vladimir Morozov, who touched just .02 behind in 46.68.

For Adrian, he chose the right time to turn it on, as his 46.57 tonight was his 2nd-fastest clocking of all-time in the SCM of this event. He’s only been quicker in 2010 at the World Championships where he swam away with a time of 46.44. Schneider, this summer’s Pan American Games 50m freestyle title winner, also broke ground tonight, earning his first sub-47 mark of his career. Together they added 8 points to USA’s total.

Yet another record fell to the ground tonight by Hungary’s Katinka Hosszu, this time in the women’s 200 back.  In a tightly-contested race with American rival, Missy Franklin, Hosszu’s strategy involved taking it out hard, splitting 58.14 for the first 100 to Franklin’s 58.86. The two were the only competitors to clock a sub-59 in the opening 50. Even with this opening speed at lightning pace, Hosszu held on, cracking off a splits of 30.72 and 30.89 on that back half to score a new U.S. Open mark of 1:59.75. The old U.S. Open Record was held by 2012 Olympic gold medalist Franklin at 2:00.14.

Out of lane 6, American Courtney Bartholomew scored a 2nd place finish with her time of 2:01.33, while Franklin went on to earn 1 point for Team USA with her 3rd place finish of 2:01.53.

USA pulled out another win, with a huge push by big man Matt Grevers in the last 25m of the race. Serbian/Proleter Club member Arkady Vyatchanin looked impressively smooth, yet fierce in the first 150m, splitting 25.65, 27.49 and 28.27.  But Grevers split a final 50 at 26.44 to Vyatchanin’s 29.46 to hammer out the win in dominating closing fashion.

Vyatchanin, the former world record holder in this event until Aussie Mitch Larkin tore it up at his nation’s Short Course Nationals recently, clocked a time of 1:50.87 for 2nd place.

American Ryan Lochte doubled up on his 400 IM victory with a 3rd place spot in this race, touching in 1:52.58 to add another point to the U.S. total.

Another close finish that came down to the touch resulted in another American win. Melanie Margalis was able to make her final stroke just long enough to hold off Euro All Star Yuliya Efimova, with the American beating the Russian by must .2 of a second.  Margalis’ final time was 2:18.35 to Efimova’s 2:18.55. For Margalis, that marks her best time ever in this event, as her previous best was 2:23.74 at last year’s short course world championships.

Efimova, fresh off her 100m breaststroke gold in Kazan this summer, touched just .05 behind her best time of 2:18.50. Belgium’s Fanny Lecluyse, who had a killer European Short Course Championships last week, rounded out the top 3 with her time of 2:19.57.  Lecluyse was a two-time medalist in Netanya, taking silver in the 50m breaststroke and gold in the 200m distance.

American came away with the win in the men’s version of the 200m breaststroke event as well, as Cody Miller stepped up in a giant way to out-touch Hungarian World Record Holder, Daniel Gyurta at the wall.  Miller was trailing Gyurta after the first 50m, but turned it on to out-split his Euro star rival by half a second on the way home. Miller’s final time was 2:02.33 to Gyurta’s 2:02.36, so just .03 of a second separated the two studs.

For Miller’s relentless pursuit, he was rewarded with not only the win, but a new American Record and U.S. Open Record in the event.  The Badger Swim Club’s time tonight overtook the American Record previously held by Kevin Cordes at 2:02.38. Texas legend and 2012 Olympic bronze medalist, Brendan Hanson, held the U.S. Open Record at 2:03.62, but Miller wiped that off the map, too, lowering the mark by over a second.

3rd in tonight’s race was Andrew Willis for the Euro All Stars, who finished in 2:03.60.

The 100 butterfly race was a dogfight between America’s Kelsi Worrell and Denmark’s Jeanette Ottesen. Ottesen fired off an opening 50 of 25.44 to Worrell’s 25.95, but Worrell gathered steam and came home in a mark of 25.95 to give Ottesen a run for the win. The Danish swimmer ultimately won out, clocking a time of 55.10, a new U.S. Open Record.

Worrell was able to nab second in the race with her stellar time of 55.42, but she also managed to clock a new American Record with that time. Her outing tonight overtook that of new mom Dana Vollmer, a time of 55.59 from 2010.  Worrell now owns the short course yards and short course meters American Records in the 100 butterfly.

But the Americans struck back in the men’s 100 fly, as Tom Shields dove in and nearly broke the World Record. He finished with a final time of 48.63, missing the world record by .19 but lowering the American and US Open Records. Shields broke his own American record of 48.80 and also lowered Ian Crocker‘s US Open record of 49.07 from 2004.

Hungarian Laszlo Cseh was second at 49.55, and the European All-Stars nabbed the third-place points, too, on Pavel Sankovich‘s 51.21.

In the women’s 400 free, Jazmin Carlin (GBR) scored a new U.S. Open record time of 3:58.07, a mark which tied that of American Chloe Sutton’s record from 2011. Carlin’s time tonight was her best ever and even rose above the 3:58.81 she clocked last weekend in Netanya, Israel to claim gold in the event at the European SC Championships.

Carlin split the race beautifully, but did need to catch up to American Hali Flickinger who gained an early lead in the contest. Flickinger wound up second in 3:58.26, leading until the very last 50. Lotte Friis was third overall in 3:59.15.

On the men’s side, 2015 World Champion in the 200m freestyle, James Guy also earned the win tonight for Team Europe in the 400m distance, touching in a new U.S. Open Record. Guy touched the wall first in a time of 3:37.78, the 2nd-fastest time of his relatively short career.  The mark overtook that of the 3:40.05 held by American Michael Klueh that’s been on the books since 2011.

The only time Guy has been faster that his outing tonight was when he earned silver to Hungary’s Peter Bernek at last December’s Short Course World Championships in Doha. Tonight’s swim signifies just the 3rd time Guy has gone sub-3:40 in this SCM event.

The U.S. women finished the night in dramatic fashion, winning a 4×100 medley relay that saw both teams break the world record. Courtney Bartholomew, Katie Meili, Kelsi Worrell and Simone Manuel combined to go 3:45.20, getting under the 3:45.56 mark set in 2011 by Team USA.

The European relay was made up of Arkady Vyatchanin, Daniel Gyurta, Laszlo Cseh and Morozov, and went 3:21.87. Gyurta put the team into the lead with a 56.38 breaststroke split, but he was the only European to outsplit his American counterpart and Shileds erased the lead almost instantly.

FYI: The NBC Sports link takes you to some Dew Tour Highlights for some odd reason.

Didn’t know Lochte was doing the 400 IM… Hopefully he can give us a good show!