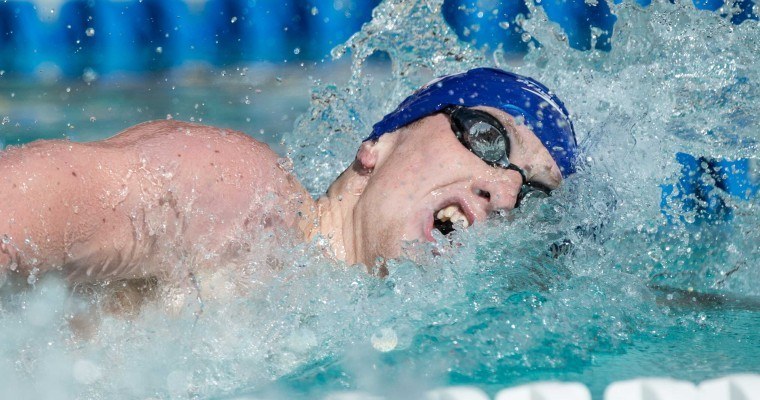 While representing the Euro All Stars at the 2015 Duel in the Pool this weekend in Indianapolis, Indiana, Dan Wallace, broke the Scottish National Record in both the 200m IM and 400m IM events.

As we reported on Friday, Wallace cracked the 400m IM record on Day 1 of the competition while racing his way to 2nd place behind home crowd favorite, American Ryan Lochte. With his runner-up performance of 4:04.10, Wallace, a former University of Florida Gator who won the long course version of this event at the 2014 Commonwealth Games, comfortably sneaked under countryman Lewis Smith’s long-standing record of 4:04.89 set back in 2009 (i.e., supersuit era).

The next day Wallace took on the shorter 200m IM distance where, due to a Ryan Lochte DQ, he finished in 3rd behind Americans Josh Prenot and Conor Dwyer. However, Wallace’s time of 1:55.18 was enough to lower the Scottish National Record – a record which was just hours old.

Prior to Saturday, Wallace held the 200m IM Scottish National Record with his time of 1:56.34, but that mark was crushed by University of Stirling swimmer, Duncan Scott, also swimming on Saturday. While competing at the Scottish SC National Championships, Scott lowered the National mark to 1:55.92 to – as it turns out- temporarily etch his name into the Scottish swimming record books.

Splits for Wallace were as follows: