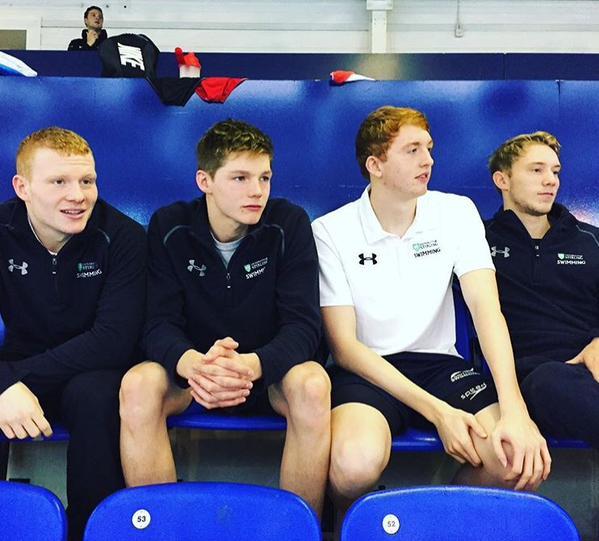 Joyce continues to break world records at a breakneck pace.

The Scottish National Short Course Championships took place at the Royal Commonwealth Pool in Edinburgh this weekend, concluding today with a collection of records broken over the course of the event. Young stars and seasoned athletes alike stepped up to make their mark among the growing talent embedded within the nation.

Stephen Milne and Ross Murdoch were among the athletes taking National Records home with them after a weekend of racing. Murdoch’s came in the form of his 50m breaststroke victory in a new national mark of 26.69, which overtook that of his teammate Craig Bensons’ yet-to-be-verified 26.84 from BUCS earlier this season.  Murdoch also roared a new record in the 100m breaststroke, taking that race’s win in 57.59 to further etch his name into the Scottish swimming books.

Perth City’s Milne got the job done in the freestyle event, first breaking Robbie Renwick’s Scottish Record in the 400m freestyle, a time which has stood since 2008. Milne touched the wall first in that race in a time of 3:40.18. Milne followed that performance up with another record, this time in the grueling 1500m distance. The National Record stood at 14:37.28 by Graeme Smith from all the way back in 2001, but Milne made the mark bite the dust, clearing 14:36.55 en route to the title.

Home crowd favorite, Kathryn Johnstone from Edinburgh University, made a dent in the 100m breaststroke at the meet.  Johnstone had equaled the national record in a swim earlier in September, so the athlete was on a mission to conquer the mark at this meet.  Conquer she did, as Johnstone clocked a new time of 1:06.22 for the win.

University of Stirling swimmer Robbie Renwick tore up the Scottish National Record in the men’s 100m freestyle on day 2, stopping the clock at a time of 47.65. “I’m really happy with that time, it felt good. Having the guys over from Belgium again helps make each race so competitive which only spurs us on to go that bit faster”, Renwick commented post-race (*See note below).  By Belgians, he meant Jasper Aerents and Emmanuel Vanluchene who actually finished in 1st and 2nd in the race, with the former setting a new Open Record of 47.37.

Renwick then also wowed the crowd with another new National Record in the 200m freestyle. He threw down a time of 1:43.58 to claim his 2nd title of the meet.  Of that race, Renwick commented, “I’m really chuffed with that. I’m more happy with the fact that I moved it on from this time last year, that’s a good benchmark to see where I am. It’s good to be getting PBs moving into next year, that where I want to be, it’s exciting. Taking the record from Andy (Hunter) is great. He’s a good friend of mine. I know that getting the record meant a lot to him and it means a lot to me, although I don’t think it’s going to take another six years before its broken again.”

Renwick’s Stirling teammate and 2015 European Games stand-out, Duncan Scott, also scored a record of his own on day 2. Scott, also challenged by Belgian Vanluchene, registered a silver in the men’s 200 IM in a new National Record-setting time of 1:55.82. Vanluchene won the event in a time of 1:55.17, a new Belgian National Record.  Of note, the time was ultimately lowered on the other side of the world via Dan Wallace’s 1:55.18 clocked at the Duel in the Pool.   *Also of note, Scott stole the 100m freestyle National Record right back from Renwick, by leading off his squad’s 400m freestyle in a swifter time than Renwick’s.  Scott registered an opening 100 of 47.37, thus beating Renwick’s newly-minted record of 47.65 from the individual race.

City of Glasgow’s Camilla Hattersley joined the record-breaking party, touching in 1:56.52 in the 200m freestyle to claim a new National Record. Hattersley was ecstatic post-race, exclaiming, “I am absolutely buzzing about that race, it is better than I could ever have expected. I’ve been training really well and I knew I could go fast, I just didn’t believe that I could go that fast and break the record. I’m really enjoying training with Ian (Wright). It’s been good having a change and it seems to be working well for me. Going into next year and the Trials, I’m not going to put any expectations on myself, I will just wait and see what happens.”

The University of Stirling earned the Top Club Trophy and club member Duncan Scott was awarded the “Paisley 500” Award as top overall performer of the meet. Ross Murdoch was named ‘Top Male Performance’ of the meet for his 200m breaststroke final, while Camilla Hattersley earned the same on the women’s side for her 400m freestyle win.

Of the entire Scottish contingency’s performance at the event, National Head Coach Alan Lynn stated, “I’m very pleased with the execution of race strategies by the leading swimmers and I’m encouraged by some of our younger swimmers challenging more established names. This has been another exciting and very competitive meet to round off the first training phase of this Olympic season.”

This is great news for the British 4x200m free relay. Having RR firing on all cylinders is key to the teams medal chances in Rio.