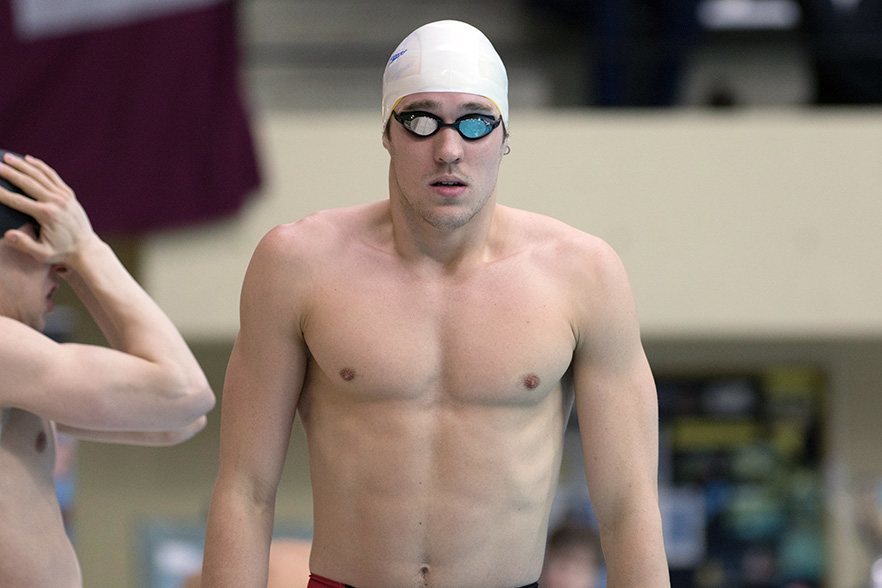 Follow @MitchBowmile for live-tweets all weekend for the CIS Championships

So far this meet Toronto’s Eli Wall has been in absolute control of the breaststroke events. He won the 200, he won the 100, but he won’t be able to complete the sweep after taking ninth overall this morning.

Instead, McMaster University’s Konrad Bald is now the top seed with a 28.08. He took two tenths off his seed time to drop that time. Sitting second is Dillon Perron of Manitoba over Alberta’s Nick Kostiuk.

Throw in Jonathan Naisby, UBC’s Sergey Holson, and Calgary’s Bogdan Knezevic and it should be a solid final tonight in the 50 breast.

Wall will be swimming hard in the ‘B’ final, vying to establish himself with a great time tonight.

Fiona Doyle has been the undisputed breaststroke queen here in Victoria, setting records left right and centre and taking wins as if it’s a age-group club meet.

This morning, Doyle broke former 200m breaststroke world record holder, Annamay Pierse’s, CIS Championships record of 30.71 in the 50m breaststroke by just one one-hundredth. Doyle clocked in at 30.70 to take the top seed.

Erin Stamp, who has truly emerged as a defining breaststroke figure this meet, rocked a 31.15 for second overall. UBC’s Rebecca Terejko was third in 31.48.

Defending CIS Champion Tera Van Beilen will also be in the final. Van Beilen swam a time of 32.21 to take the sixth seed heading into tonight’s final.

There hasn’t been any standout figures in the backstroke events here at the 2015 CIS Championships. The 50m backstroke and 100m backstroke were won by different swimmers, and now the 50m backstroke champion will not be present in the 200 back final, and the 100 back champion is seeded eighth.

Robert Bonomo of Ottawa led the way this morning with his time of 1:57.01. He already has one medal so far, a bronze in the 50m fly final.

Over a second behind Bonomo was Alberta’s Joe Byram who clocked in at 1:58.20. He has one bronze medal already at these championships in a backstroke event after taking third in the 50.

Josh Binnema of Alberta was behind him followed by UBC’s Marshal Parker and Toronto’s Matthew Myers.

Current CIS Championship record holder Genevieve Cantin of Laval took the top seed this morning in the 200m backstroke, putting her on the right track to defending her title.

Cantin was a 2:07.43 to separate herself by a large margin from the remainder of the field. Emily Anzai was the second fastest overall with a time of 2:10.49.

Also in the final will be Barbara Jardin of Montreal. Jardin, mostly known for her freestyle, dropped a 2:11.28 to take the third seed overall heading into tonight’s final.

The won’t be the only UBC swimmer as Erika Seltrenreich-Hodgson will also be in the final. She clocked in at 2:11.45 just behind Jardin.

Yuri Kisil led a VERY fast field this morning with a time of 48.22 in the 100 free. He was one of two swimmers under 49 seconds in the event. Evan Van Moerkerke of Guelph was a 48.53 behind Kisil.

Amazingly, all of the finalists dipped under the 50 second barrier this morning presenting an extremely competitive field. Two swimmers who were under 50 were not able to grab a spot in the championship finals.

UBC boys Stefan Milosevic and Chris Manning, who are both known for their speed, will also be in tonight’s final. Toronto’s Mitchell Ferraro also grabbed a spot with a fourth place 49.29.

A Mainville 1-2 finish tonight is more of a possibility than ever after this mornings prelims. Sandrine Mainville was the fastest overall in 54.31 followed by her sister, Ariane Mainville, who clocked in at 54.77.

It’s no secret that they want to go 1-2 in the event after finishing first and third respectively in the 50m free earlier in the meet.

Sandrine Mainville also had the chance to defend her sprinters cup from last year. The sprinters cup is awarded to any swimmer who wins both the 50 and 100 freestyles at a CIS Championships.

The only swimmer truly within range of the Mainville’s this morning was Toronto’s Paige Schultz. Schultz was a 55.01.

Coleman Allen is in a position to win yet another gold medal at these championships after taking the top spot in the men’s 200m IM. Allen was a 1:57.82 this morning to top the competition.

So far, Allen has been able to run away with wins here, but tonight his competition will be a lot closer. Allen’s teammate Jonathan Brown wasn’t far off his time with a 1:58.40. David Riley of Toronto was close as well, swimming a 2:00.67.

It seems as though Brown has the best chance at catching Allen tonight, but there will be plenty of fast swimmers in tonight’s final. Bogdan Knezevic from Calgary will be there as will IM star Luke Reilly.

The women’s 200m IM final is arguably the toughest final of the night after some very fast swims this morning.

Grabbing the top spot was Toronto’s Kylie Masse. Masse was almost two full seconds ahead of the next competitor, Erika Seltrenreich-Hodgson, with a time of 2:10.93.

Seltrenreich-Hodgson, the favourite in the event, went a 2:12.72 to take the second seed. Following her was Laval’s Marie-Pier Couillard in 2:13.57. All the swimmers in the top three have already medalled at this year’s CIS Championships.

The final will be one of the fastest of the night.