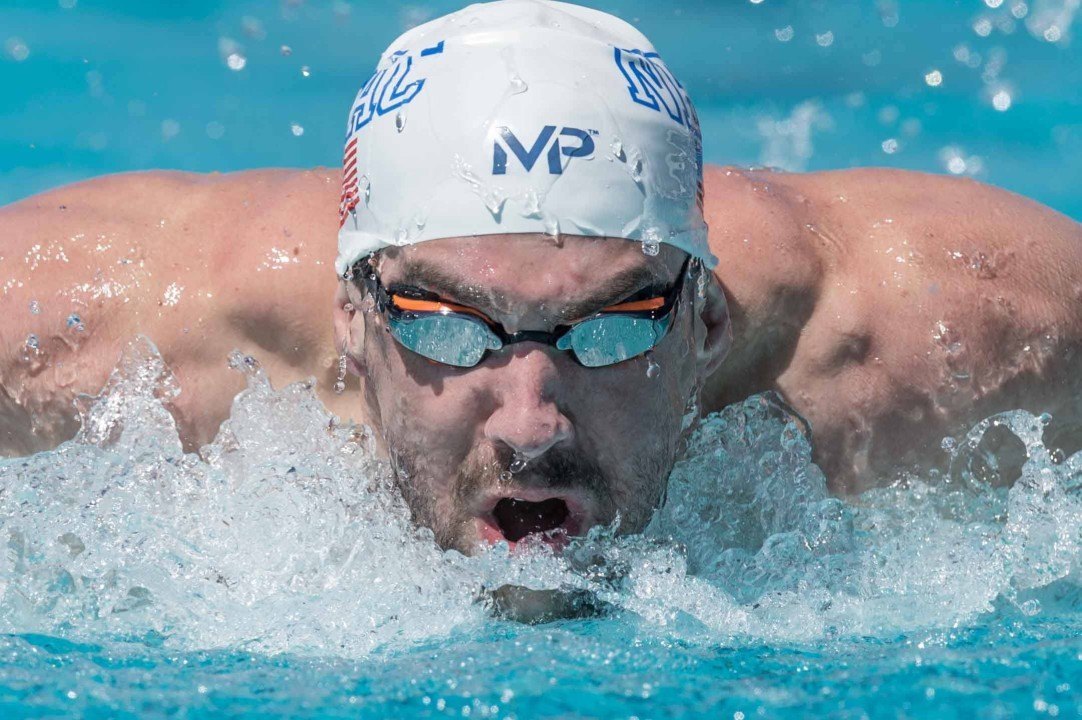 Katie Ledecky time of 1:57.41 leads the field out of prelims this morning, with the “Iron Lady” not too far behind. Katinka Hosszu is the second seed with her morning time of 1:57.64.  Ledecky’s top time in this event is the 1:55.16 she clocked at last Summer’s nationals, while Hosszu’s personal best is a 1:56.30 she earned at the Charlotte stop of the “Grand Prix” series.

SwimMAC Elite’s Katie Meili celebrates her birthday in style, throwing down the fastest time of the morning by over two full seconds.  Meili’s morning time of 1:07.16 is her fastest of 2015 and now ranks her as 9th in the world. Teammate Micah Lawrence was next in line with 1:09.45, although she, too, clocked a 1:07-low time earlier this year at the Aquatic Super Series in Perth.  Breaststroke powerhouse Breeja Larson (whose birthday is also today) is also in the mix for tonight’s finals, earning the 3rd seed in a time of 1:09.63 to represent the only three swimmers to clock sub-1:10 times.

The top four competitors of the women’s race all scored times beneath the 1-minute threshold, with the top seed, Kelsi Worrell, taking it up one more notch with a sub-59 morning swim.  Worrell’s 58.63 looked smooth and controlled and lands the recent two-time NCAA champion in the world’s top 20 for 2015.  Right behind Worrell is Claire Donahue, nabbing the 2nd seed in a 59.41, but she had Katie McLaughlin hot on her heels in that same heat.  McLaughlin’s time of 59.68 earned her the 4th seed, with SwimMAC Elite speedster Arianna Vanderpool-Wallace sliding into the #3 spot headed into finals in 59.62.  Additional A-finalists are Cammile Adams (1:00.04), Felicia Lee (1:00.17), Hannah Saiz (1:001.9), and Ellen Thomas (1:00.79).

So this morning’s heats was merely a prelude to what is in store for tonight’s final, as we were treated to Olympians and National Teamers galore.  It feels good to be able to write Michael Phelps’ name in results – Phelps led the field in a time of 52.92, chasing down Tim Phillips who led heat 11 through about 75 meters.  Phillips’ time of 53.02 is the second best of the morning, with his SwimMAC Elite teammate Ryan Lochte as the 3rd seed in 53.17.  Tom Shields won heat 10 with this time of 53.28 to be seeded 4th and Matthew Josa clocked a 53.32 for 5th.  Two Phoenix Swim Club swimmers comprise the 6th and 7th seeds, with Giles Smith and Alexandru Coci registering times of 53.70 and 53.82, respectively.  Marcus Schlesinger threw down a 53.86 from heat 8 of 11 to find himself as the 8th seed going into tonight’s finals.

Katinka Hosszu certainly made a statement with her morning swim, crushing a 4:36.00 to slide into the 2nd-fastest time in the world so far this year.  Hosszu led her heat wire-to-wire and touched almost 7 seconds ahead of the nearest competitor.  Katie Ledecky held her own in the same heat, however, and transitioned well from stroke to stroke in the event, clocking her personal best of 4:42.82.  Look for a lights out battle between these two fierce competitors tonight.

Cammile Adams will also be gunning for the first place prize tonight, sitting as the 3rd seed in 4:46.18, followed by Cal Aquatics’ Caitlin Leverenz who registered a 4:46.18 for the 4th seed.  Also in tonight’s A-Final will be Vien Nguyen (4:47.78) who doubled up on the 200m freestyle and made that final as well.  We will have to see if Nguyen keeps both on her schedule this evening.  Stanford grad Maya DiRado claimed the 6th seed in 4:49.27.  Another swim and another time drop for Ohio State’s Lindsey Clary; she finished in 7th overall with a new personal best of 4:51.78.  Louisville soon-to-be-grad Tanja Kylliainen wraps up the final top 8 her time of 4:52.18.

The men’s edition of the 400 IM did not contain quite as dominating of a swim as the women’s, with the fastest of time of the morning belonging to SwimMAC Elite’s Tyler Clary.  Clary finished first in the final heat in 4:25.15, quite a ways off his 4:16.28 from Austin’s Pro Swim, signaling he may have more left in the tank to fend off the stiff competition tonight.  Trojan Swim Club’s Conor Dwyer was gradually inching up on Clary that last 75 or so meters, possible previewing a head-to-head showdown between these two workhorses.  Dwyer wound up touching the wall in 4:26.53 for the 2dnd seed, followed by Venezuelan youngster Carlos Claverie who sits as the 3rd seed in 4:26.74.  An even younger competitor, Sean Grieshop at just 16-years old finds himself in the 4th spot with his swift mark of 4:28.96.  Grieshop’s personal best is the 4:20.25 he registered at last year’s Junior Pan Pacific Championships.

Scarlet Aquatics’ Jonathan Gomez cranked out a monster swim this morning, dropping over 3 seconds for a new personal best of 4:33.81.  Ken Takahashi, Connor Green and Daniel O’Connor also made it to the A-Final.

Has Ledecky already graduated high school? She mentioned 2.5 weeks of altitude training prior to Mesa.

Is that the same Jonathan Gomez who participated at The Youth Olympic Games and The World Junior Championships? if yes, he’s doing a tremendous job

For Shields , it’s a gutsy prediction but who knows ,he can get it done ahead of everyone .

Shields, Phelps, and Lochte all looked like they weren’t really going for it in prelims. Shields with a monster underwater after the turn, but not much else. Phillips was killing Phelps until 30m left, where Phelps turned on the gas. Lochte looked like he had a ton of glide in his stroke today.

Predictions:
Phelps drops a 51 high. His training is going excellently, yes, but he’s definitely not coached with USRPT so we can’t expect that training to show at these smaller meets. Good result, but maybe not on par with what he delivered at Nats last year. I predict he can slide right back into the world rankings, but maybe not top 5.

Sean Grieshop makes it into the A final with the BIG boys tonight! Could we see a new 15-16 NAG in the 400 IM?

Best time, and only about a half second slower than the best in the country swam last year (Lawrence, Larson, Hardy, Reaney).

As I suspected, she’s not a great breaststroker, but Katie swims a pb (I think) to get the #2 time for the final. Beisel only 9th; perhaps not yet at full strength after her groin injury?

She definitely looks like she is not pushing herself, must be so frustrating to deal with such a long recovery. I feel for her.

she has plenty of time till the worlds, 100 days per the countdown calendar fina website posted just yesterday.

I was pulling for her to win the overall Pro Swim Series prize but this meet is going to make that difficult. I wish her a speedy recovery!