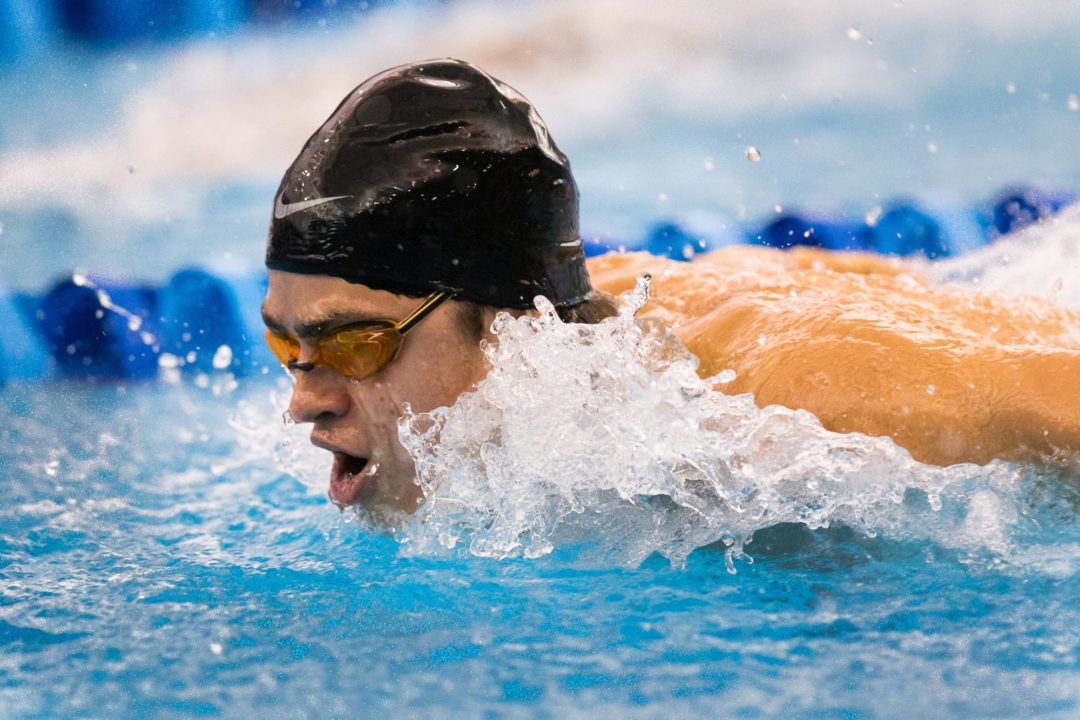 RACE VIDEOS: A finals from Day 4 of the 2014 U.S. Winter Junior Nationals

Abbey Weitzeil torched the American record in the 100 free while leading off the 4×100 free relay for Canyons.

RACE VIDEOS: All A finals from Day 3 of the 2014 U.S. Winter Junior Nationals

Ryan Hoffer won three times on night 3, including a 15-16 National Age Group record in the 100 fly.

Ella Eastin won the 200 IM last night to back up her title from last year, and this morning took the top spot in the 400 IM with a 4:12.57. That time was well off her meet record of 4:05.25, and she’ll have to pick up the pace tonight in finals if she wants to secure another win.

Regan Barney of Nitro wasn’t too far behind, grabbing the second seed in 4:14.53. Although that time was a lifetime best, she wasn’t too far off Eastin’s swim, putting Eastin in danger. Kenisha Liu was the third fastest this morning in 4:15.28.

The fight for silver and bronze should be intense as from third to eighth place all the swimmers were within 1.11 seconds of each other making way for another very close final.

After a fantastic 500 freestyle last night that resulted in an age-group record performance, Sean Grieshop from Nitro was back on top leading the way in the 400 IM prelims with a 3:45.57. That time was a five-and-a-half second time drop from his seed time coming into the meet.

Grieshop will definitely have some work to do tonight if he wants to edge towards Michael Phelps’ 15-16 age-group record of 3:42.08, however given that he was within three and a half seconds of the time, he could very well be in that range although it wouldn’t be an easy record to break. Grieshop did drop a few seconds from his 500 free prelim swim to his final time, so there’s no reason to count him out for this one.

Alex Lebed grabbed the second spot for tonight’s final in 3:50.04 followed by Brennan Balogh in 3:50.75. The race for second behind Grieshop tonight, if nobody is able to catch him, should be a great one as the second through eighth seeds are all tightly knit, paving the way for an amazing final.

The women’s 100 fly was led by Maddie Banic this morning who dropped almost a full second and a half off her lifetime best to clock in at 52.95 and take the top seed. Banic was ahead of the field by over half a second with Mackenzie Rumrill sneaking in for the second fastest seed in 53.48.

Grabbing the third spot for tonight’s final was Katrina Konopka with a time of 53.76. It should be a close race for third was Megan Doty was a 53.79 this morning, but has a personal best of 53.57.

Yesterday’s freestyle sprint star Ryan Hoffer showed his versatility this morning with a 47.26 100 fly to rank him first heading into the finals. He dropped close to half-a-second off his seed time to make it his second best time of the morning session.

Behind Hoffer was Michael Andrew who was also no slouch as he wasn’t far behind in 47.63. Andrew was the top seed heading into the meet with a personal best under 47 seconds (46.95). It should shape up into a great race between Hoffer and Andrew tonight.

Andrew’s already been under the current 15-16 NAG record as a 14-year-old, however tonight the two swimmers could be gunning for the 46.99 mark. Hoffer displays pure white fibre raw sprinting, and that could help his case as he’s already shown the field he’s in great shape following the 50 freestyle record and victory.

Moseley was the fastest this morning in 1:45.80, a time which she dropped 1.24 seconds off her lifetime best to make. Taking the second seed was Lauren Pitzer who finished second overall behind Ruck in the 500 last night. Pitzer was a 1:47.18.

Nitro’s Karling Hemstreet featured a gigantic time drop to grab the third spot heading into finals, taking over two seconds off her lifetime best to swim a 1:47.27. Lauren Barber was just 0.01 seconds behind her in 1:47.28 with Brooke Hansen taking the fifth seed in 1:47.68.

With a huge portion of the field shaving off tons of time, it seems as though Ruck could pull through to the top three if the ladies all swim similar times tonight. To get past Moseley however, Ruck will most likely need to swim a personal best time.

Moseley is the favorite heading into finals, but there are a few girls that could challenge her, including Ruck.

Sixteen-year-old Michael Jensen took over two seconds off his lifetime best to swim a 1:37.17 200 freestyle and grab the middle lane for finals. It’s far from over however as the 200 freestyle is going to be one of the tightest finals of the night.

The top five are so close, it’s almost impossible to call the race tonight as anybody could win it. Cogswell did enter with the fastest seed which could give him an advantage tonight as he’ll also have a middle lane and a great view of the field.

Sean Grieshop of Nitro, who rocked a solid 400 IM earlier, grabbed the sixth seed in 1:37.93 behind the top five. There’s no doubt that Grieshop is a monster in the freestyle events as was proved during yesterday’s 500 free final, however he’ll be dealing with fatigue from the 400 IM final. Although there should be a decent amount of time between the two events, there’s no denying that a 400 IM will take something out of you, especially when gunning for an age-group record.

Tyler Rice and Knox Auerbach will be the remaining finalists tonight.

It took a 1:00.63 by Lindsey Horejsi to grab the fastest spot for tonight’s final in the 100 breaststroke. Horejsi however didn’t lead by much as Nikol Popov threw down the second fastest time of the prelims with a 1:00.67.

The two of them were fairly far ahead of the field with 15-year-old Morgan Firesen taking the third spot well behind the two leaders in 1:01.36. Alyssa Arwood wasn’t far behind Firesen in 1:01.41 followed by Vivan Tafuto in 1:01.54.

Horejsi has a very good chance at winning this race as she led the field and added over a second on her personal best time. Popov dropped time, giving the advantage to Horejsi tonight. The battle for the bronze will be a tight one considering there are about four girls who are vying for that spot and have potential to make it. All of their best times are within a similar range, however Lauren Barber, the sixth seed, might have a slight advantage gunning for the medal position.

Michael Andrew will have another tough battle following his matchup with Ryan Hoffer in the 100 fly considering that he took the second seed to Blair Bish in the 100 breaststroke. Bish, 18, was a 53.79 to lead the way as Andrew came second behind him in 54.34.

Andrew and Bish won’t be the only leaders though, as both Carson Sand and Jeremy Babinet were not far behind Andrew sporting a 54.35 and a 54.48 respectively.

Bish dropped time this morning, and Andrew’s personal best is within a tenth of the time Bish swam. If Andrew can get close to his best time, and Bish can swim a similar one it should shape up to be a great race. Sand was also a best time this morning, but not by much, meaning he could bring some heat to the final was well.

Babinet dropped over three seconds, but it will most likely take a time under 54 seconds to win the race. He’ll need to drop round half a second from his new personal best if he wants to be a contender for the gold.

There was a tie for the fastest qualifying time this morning between Hanni Leach and emma Schanz at 53.36. The two will be battling some familiar faces tonight as Maddie Banic, who qualified for her second final of the day, took the third fastest time in 53.68.

Ashlyn Schoof who has had a great career was a 53.90 to take the fourth seed. Scottsdale’s Taylor Ruck who will also be swimming the 200 freestyle final rocked a 53.97 to be the last girl under 54 seconds this morning and take the fifth spot.

It’s s tight field, and the race could go to anybody. They all swam well in prelims and posted very similar times, so tonight’s champion will be the swimmer who’s able to translate their prelim success to the finals the best.

Michael Taylor was the only swimmer under 48 seconds this morning with a 47.93 in the 100 backstroke. Michael Thomas, the current national age-group record holder in the 15-16 year-old category was the second fastest in 48.08.

Jessie Kim was a 48.10 for third and Ryan Hoffer dropped half-a-second to swim a 48.22 and also make the finals.

Thomas definitely has the advantage, and seemed as though he was taking things a little easier this morning in pursuit of a fast time tonight. If Thomas is one his game, there’s nobody in the final who has shown that they have the potential to beat him in the 100 back.

The race could be his if he performs close to his personal best, or even slightly faster than this morning’s swim.

And the 13-14 belongs to Reece Whitley

47.26 for Hoffer in the 100 fly prelim with room for improvement. He was really long on his second turn. Michael Andrew looked to be holding back a little bit. Its going to be a great final tonight and might take a nag to win.