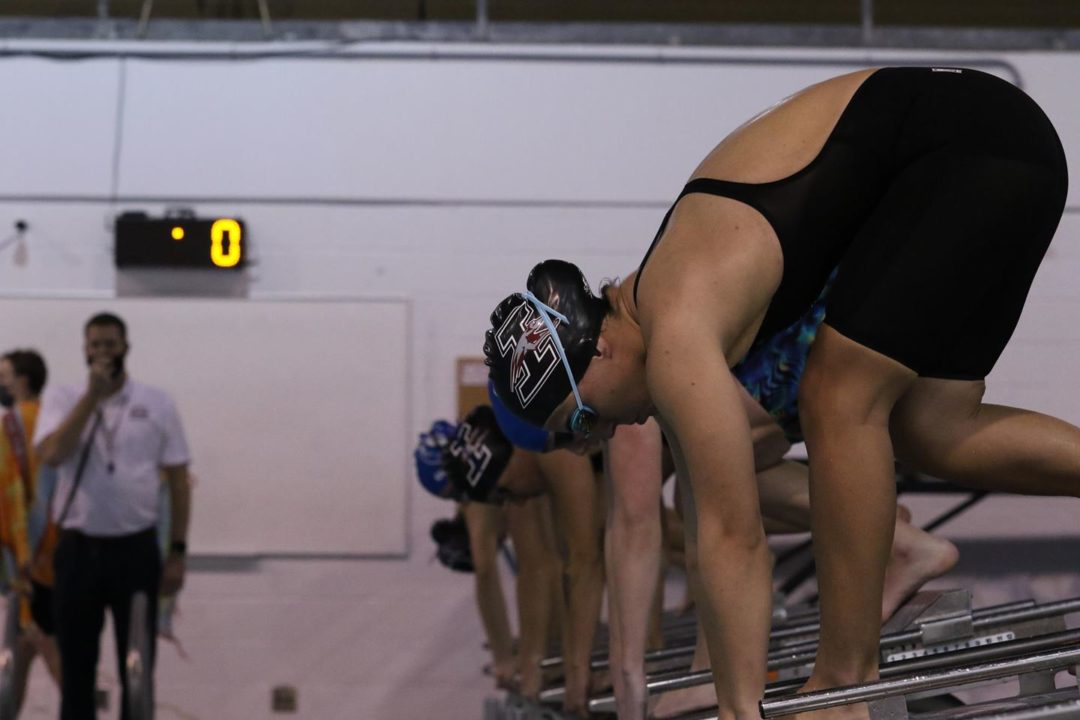 The host team won both the men's and women's meets, while Wingate took 2nd in both, and Lindenwood 3rd. Stock photo via Jordan Menard/U Indy Athletics

U Indy hosted an invite featuring 5 top DII programs this past weekend. The host team won both the men’s and women’s meets, while Wingate took 2nd in both, and Lindenwood 3rd. The invite led to a number of DII top times this year, including from U Indy senior Johanna Buys, who posted division-leading times in the women’s 50 free, 100 free, and 100 fly.

Buys did win the women’s 50 free, however, her DII-leading time came in her lead-off leg on the 200 free relay. In the individual race, Buys clocked a 23.09 to win a fairly tight race with Wingate freshman Kelsea Munro (23.26). Leading off the relay, Buys swam a 22.52, becoming the first, and to this point, the only DII swimmer to break 23 seconds in the event this season. Munro also led off, posting a 23.10 on the first leg of the Wingate relay. Her time puts her #2 in the division this year.

The U Indy 200 free relay was looking strong in this first invite showing, posting a 1:32.36. Not only did Buys clock a 22.52 leading the squad off, they had another sub-23 split with anchor Krystal Caylor clocking a 22.99. Leticia Vaselli and Julia Magierowska were the middle legs, splitting 23.57 and 23.28 respectively.

Buys had another great 50 performance over the weekend, anchoring the U Indy 200 medley relay in 22.21, marking the fastest split in the field by far. It was Nova Southeastern who ran away with the relay, however, thanks in large part to some speedy front end swimming. Celina Marquez led the team off in 25.07, and Savanna Best split 27.84 on breast, for a 52.91 on the first 100, which put them nearly 4 seconds ahead of the next-fastest team. Aleksandra Maslova swam a 24.68 fly leg, and Solana Capalbo anchored in 23.83, resulting in a 1:41.42 final time.

Buys would then go on to win the women’s 100 fly in 55.19, leading the race from the first 50. That time also now stands as the top time among DII swimmers this season. In the 100 free, Buys swam a 50.11, winning and establishing her 3rd NCAA DII top time of the weekend. U Indy teammate Marizel Van Jaarsveld was 2nd in the event, swimming a 50.32. Van Jaarsveld’s time now stands as the #2 time in the division this season.

NSU’s Celina Marquez swept the women’s backstroke events, starting with a 53.99 to win the 100 back. With the swim, Marquez is now the #1 swimmer in the division by a large margin, with the #2 ranked swimmer being Nova Southeastern teammate Cassie Wright (55.58). In the 200 back, Marquez blew away the field, swimming a 1:59.18 to touch first by 4 seconds. Unsurprisingly, that time is also #1 nationally among DII swimmers, coming in over 3 seconds ahead of the next-fastest.

U Indy junior Likith Prema was on fire in the men’s breaststroke events. Prema first won the men’s 100 breast in 53.82, establishing the top time in the nation for DII swimmers this year. His winning time of 1:59.06 in the 200 breast also tops the DII rankings.

Nova Southeastern freshman Thomas Flower won the men’s 200 free in 1:38.89, touching as the only swimmer in the field under 1:40. With the swim, Flower just edges out Queens (NC) swimmer Alex Kunert (1:38.94) to lead the DII standings this season.

Wingate’s Miguel Marcos, a freshman, won the men’s 500 free in 4:28.41, establishing the top time nationally in the event. Grand Valley senior Keegan Hawkins swept the men’s IMS. In the 200 IM, Hawkins swam a 1:49.08, becoming the first DII swimmer this season to break 1:50. In the 400 IM, Hawkins swam a 3:52.35, narrowly beating Lindenwood’s Matheo Mateos-Mongelos (3:52.45). The pair now lead DII swimmers through this point in the season.

I’m sorry, but as a parent of a swimmer in this program, I have this to say:

SHAME ON THE NEGATIVE COMMENTERS for attempting to deflect from the accomplishments portrayed here. Take your story someplace else. This was NOT the medium for it, if it was even necessary at ALL. All that is evidenced by your comments is vengeance. I’d take this further, but I won’t because quite frankly, you’re not worth it.

TOTALLY agree with Tickedparent…..someone, hiding behind a “pseudonym” makes unproven allegations. IF you have proof of your “Fake News”; let it out….also, put a real name and don’t hide behind your “Wizard of Oz” drape.

Indy definitely going to be closer to the Drurys and Queens of the world than the McKendrees and Lindenwoods. That team has a *ton* of NCAA scorers.

You act like McKendree and Lindenwood don’t have fast swimmers and super fast times already set this year.

No, I do not act like that at all.

McKendree is not nearly as deep and lost an 80 point scorer who also contributed to 3 scoring relays. 80 points is a lot to lose in one guy when your total score is 337.

Now obviously they have some good recruits (Souza, Lustig, Gandaria-Hernandez), but Indy brought in a guy who has already gone scoring times in the breaststroke events and another guy who is a 2:01/4:17 long course IMer who at the very least replaces their only big loss of Driggers.

When does the swimswam article come out about what’s going on at UIndy?
Congratulations to the team for stepping up in a tough situation and trusting in their coaches who are still on deck while the University figures out what to do with their head coach.

Wetness, I have no idea what you’re talking about. If you have information to share, you’re welcome to email me braden@SwimSwam.com

title ix involving their head coach. besides other horrible things that he did to other athletes. Uindy AD is doing a really good job in trying to hide it all under the carpet. watch him being back on the pool deck soon lol

You want to put any specifics behind those two very generic accusations you just threw out there, while probably sitting on your coach at home?

sure thing. homophobic comments towards student-athletes for one. racist jokes? throwing equipment around the swimming pool out of his own anger? insulting athletes for swimming ‘too slow’?

im sure if he was suspended that those are not just accusations. check your information.

Recognizing that there’s no evidence of any of the above, nor do we know what was really said….

Telling your athletes they’re slow? I mean, that’s kind of a coach’s job, isn’t it?

When was he suspended?

and i’m sure if he was suspended there was proof of that suspension and proof of your accusations being true, and not just untrue allegations

if you are unsure whether or not he is suspended, come to the Uindy’s swimming pool and check if he is on the pool deck. or call athletic department. no one is allowed to disclose the details of the title ix investigation.

As someone who’s swum under Jason within the past year, that’s a load of crap

Did you mean southern Illinois?

The university has figured out what to do with the head coach, keep him and keep winning. Solid idea to me

What do you benefit from commenting this? We’re all just fine over here. Jason is a fantastic coach and all of us here believe in what he’s doing for this team. We’re a family and we’re all going to stick together and show up for him.

Last edited 9 months ago by A Levy
5
-5
Reply
K.Dubcakova
Reply to  Wetness

Thank you for your congratulations- big part of UIndy’s swim&dive success is head coach’s hard work and dedication to the team. There is no need to be concerned for us. Such an article would have no use other than harm. There is a reason why his swimmers stand behind him.

Please be considerate of your comments, they are publicly accesible to family and team members.

All COACHES are on deck.

Sotia? Why do you still care?