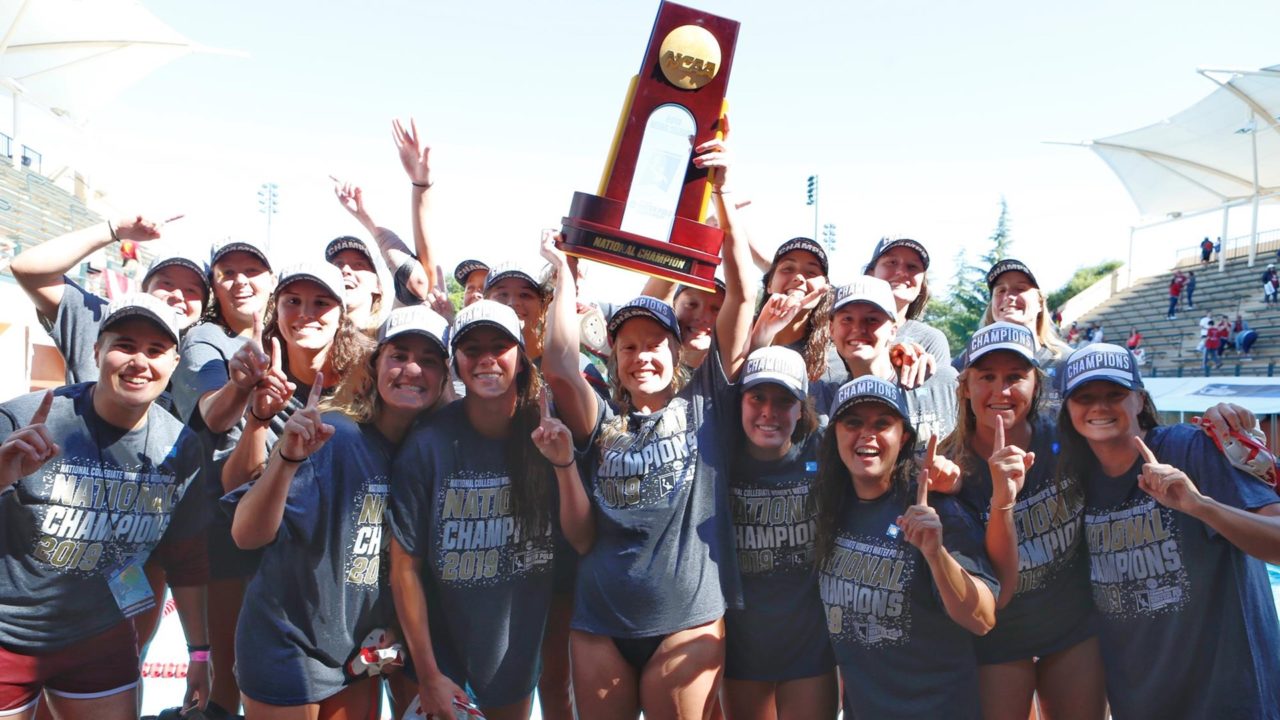 A single goal in the fourth quarter was the difference in the 2019 NCAA women’s water polo title match between #1 USC and #2 Stanford, who have combined to win the last 10 NCAA crowns. The lead changed hands five times in the contest.

The Cardinal (23-2) took home their seventh national championship trophy after rookie Ryann Neushul netted the decider for Stanford with 4:51 left in the fourth quarter. USC (28-2) nearly sent the game to extra time, however, as Maud Megens hit the left post with three seconds remaining.

Stanford nailed down the 2019 title in home waters, marking the second time the team had done so, following 2015, when the school became the first host institution to win a national championship in its home pool.

The Cardinal had already extended their own NCAA record by virtue of earning its 10th straight title match appearance.

Key Players: Rookie Mireia Guiral was the top scorer in the match, going 4-for-4 to lead USC. Maud Megens added two goals for the Trojans, while Tilly Kearns and Kelsey McIntosh added one apiece.

Goalkeeper Amanda Longan made nine saves and picked up two steals, while allowing nine goals (.500 save percentage) in the contest.

Emalia Eichelberger held things down in the cage for Stanford, making nine saves and nabbing four steals, while allowing eight goals (.529 save percentage).

How It Happened: Guiral scored the first of her four goals on a power play just under two minutes into the game (6:20) to put USC up 1-0.

Makenzie Fischer drew things level with a penalty shot (6:06) after an exclusion was called on Guiral.

Guiral struck again with an even strength goal at 5:35. Neushul netted her first goal at 4:37 to knot the score at 2. Five more shots were taken in the first quarter, but none found the back of the net.

Stanford took its first lead just 55 seconds into the second period as Makenzie Fischer put in a ball from Madison Berggren (7:05). USC responded with two goals to take a 4-3 lead as Guiral came through with her third goal at 5:34 and  Maud Megens made good on a power play (4:48).

Just 11 seconds later, Aria Fischer responded with a power play goal of her own (4:37) and Hannah Shabb put the Cardinal up 5-4 with an even strength score (3:36).

Megens evened things up, this time at 5-all, with her second goal of the night (2:14). USC had two more chances in the half, but could not convert.

The Trojans scored first in the second half as Tilly Kearns netted a power play goal just 36 seconds in (7:24), but Aria Fischer ripped home a penalty shot (6:09) to level the score at 6-all.

Both teams were forced to make changes as Aria Fischer was ejected from the game after drawing her third exclusion (2:30) and Paige Hauschild exited soon after for the Trojans (1:23).

The drama continued as Makenzie Fischer made good on Hauschild’s exclusion with a penalty shot (1:21) to knot the score at 8.

Tensions were high as both head coaches received yellow cards over the next two minutes of play: USC’s Casey Moon (0:09 in the third period) and Stanford’s John Tanner (7:51 in the fourth).

USC took three shots to start the action in the final stanza, two were saved and one was blocked, but it was Neushul who finally found the back of the net, giving Stanford the game winner on a power play goal with 4:51 left.

There were seven shots taken as time wound down. Eichelberger saved one for Stanford and Longan made three saves for USC. Alejandra Aznar hit the post for the Trojans and Megens also missed a shot.

USC took a timeout with eight seconds remaining setting up one final shot by Megens, which deflected off the left goal post and out of harms way sending the Cardinal into a frenzy.