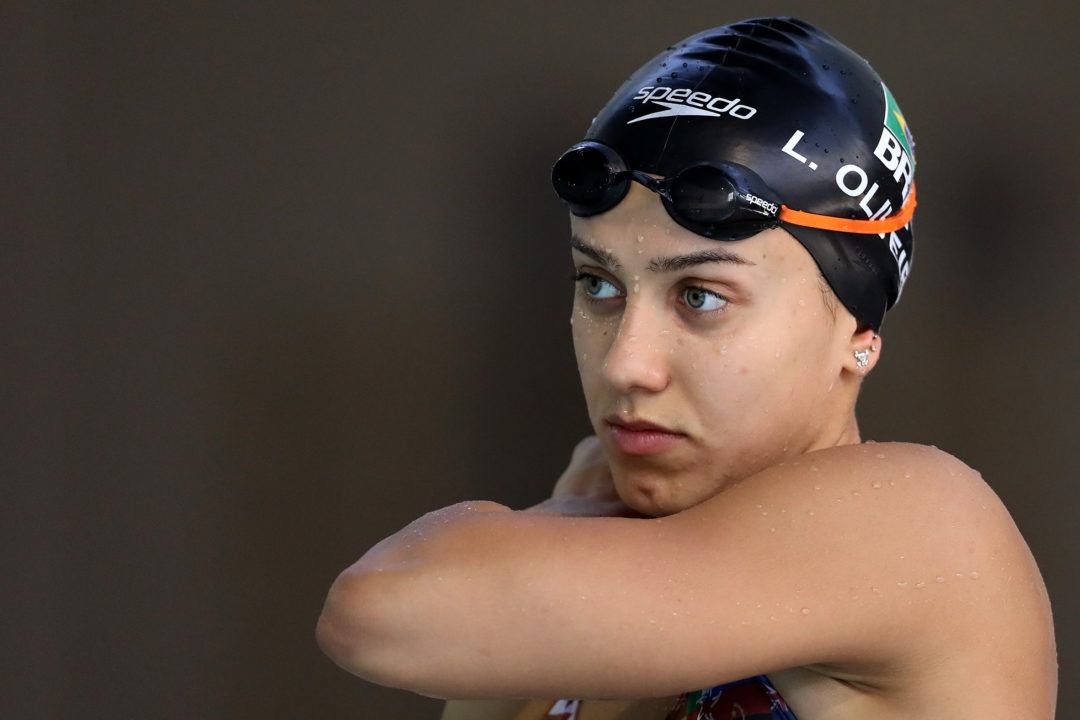 Larissa Oliveira (above) was one of two senior record-breaking swimmers at a regional meet hosted by Pinheiros this weekend. Archive photo via Satiro Sodre/SS Press

A pair of South American Records and a further Brazilian Record were broken on Saturday at a regional meeting hosted by Sport Club Pinheiros, when Larissa Oliveira and Carolyne Mazzo south an interlude to the long course season to race in short course meters at a meet hosted by their team. This is the same pool where the Jose Finkel Trophy, Brazil’s short course championship, will be hosted in August.

Oliveira won the women’s 100 free in 52.68, which broke her own record of 52.75 done in 2014. Oliveira is one of just two women that Brazil is sending to this summer’s Pan Pac Championships in Tokyo. The 25-year old is just 16 months removed from a car crash that resulted in a large tree branch landing on her car, causing significant injury to her right thigh. With her latest record-setting swim, she maintains control of the Brazilian and South American Records in the 100 freein both long course (54.03) and short course meters.

That swim was Mazzo’s first South American Record, and became part of a pair of Brazilian Records broken on the weekend. She also won the 200 breaststroke in 2:25.13, which broke another Sakemi-2009 record, this time of 2:26.44.

Brazilian women’s swimming continues to lag well behind men’s, but signs are coming of a cultural shift that is bringing more depth to the female side of the team. In addition to the 3 Brazilian Records broken above, there were also 4 Brazilian Age Group Records broken, and all 7 national marks at the meet were set by women.

Pinheiros, which both Mazzo and Oliveira represent, are the defending Brazilian Champions of the Maria Lenk Trophy.

Elsewhere in the meet, Cesar Cielo, who is expected to end his career in December at the World Short Course Championships, swam a 21.55 in the 50 free.

Cielo is on the pan pac roster or not?