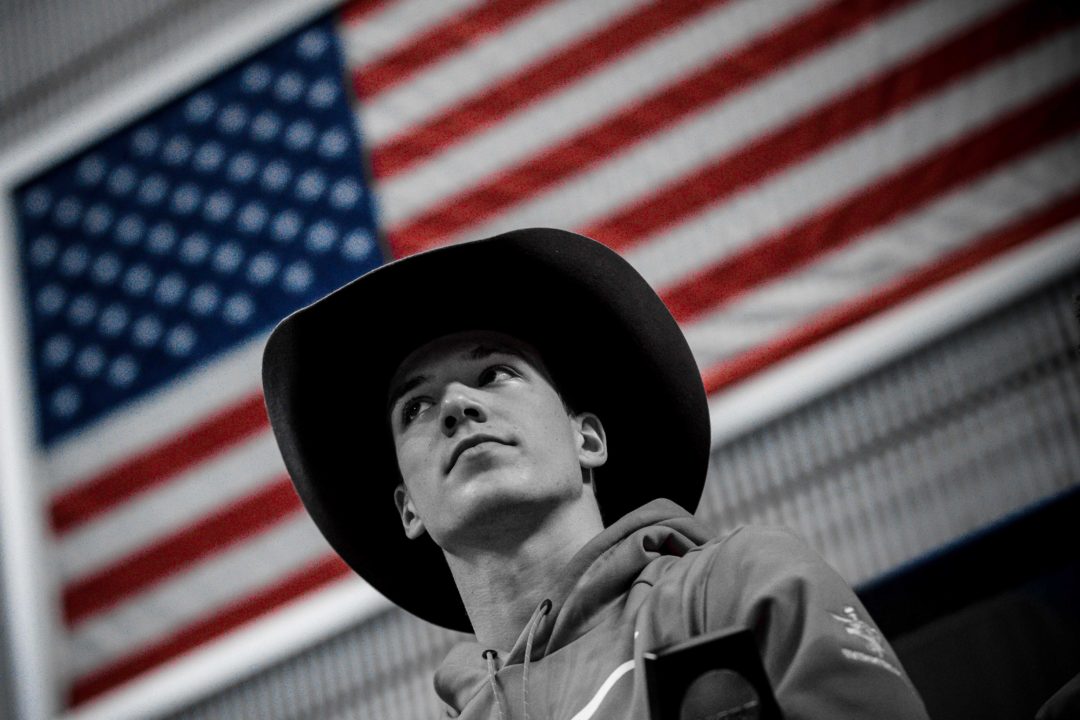 Drew Kibler is one of the few men who has NCAA scoring ability in both the 50 free and the 500 free and will focus on the latter event at NCAAs. Current photo via Jack Spitser/Spitser Photography

Over the last 5-10 years we’ve grown more accustomed to seeing freestylers with some crazy range, but Texas junior Drew Kibler is one of the few men who has NCAA scoring ability in both the 50 free and the 500 free.

The next year, though, Kibler had an almost Clark Smith-like sophomore year breakout in the 500 free, clocking a 4:11 at the 2019 Minnesota Invite. Kibler knocked nearly another three seconds off of that time this season, going 4:08.28 back in October.

Kibler now sits #5 all-time in the event, so it’s really no surprise to see him entered in the 500 free, just as he was last year before NCAAs was cancelled. He’s seeded 3rd in the event, behind Florida’s Kieran Smith and Georgia’s Jake Magahey, who each threw down 4:06s at last month’s SEC Championships, with Smith tying his U.S. Open record in the event.

In a vacuum, putting Kibler in the 500 free over the 50 free seems like an easy one. But there are a couple interesting wrinkles that might have at least given the Texas coaching staff some thought.

First, Texas a lot more men entered in the 500, and while Kibler is currently the only seeded to score, they have five men seeded between 21st and 27th, including a trio of guys at 4:14, a time that would normally score. Meanwhile, only one guy who is likely to make the Texas roster is actually entered in the 50 free, Kibler’s classmate Daniel Krueger, who’s seeded 10th.

Second, there’s also relay implications. The 200 free relay is contested just minutes before the 500 free, and as we’ve dug through the archives, we couldn’t find a single example in recent history of a male swimmer who swam finals in both the 200 free and the 500 free. Kibler actually has the fastest 50 free lifetime best of anyone on the Texas squad, with that 19.08 from 2019 just ahead of Krueger’s 19.10 from this year.

Additionally, thanks to the difference in conference and NCAA meet schedules, Kibler was on the Texas relay at Big 12s that went 1:15.76, good for #2 in the NCAA, and he split 18.56. The Longhorns will still get a more-than-solid relay from Krueger, probably plus some combination of Chris Staka, Alvin Jiang, Jake Sannem, and Caspar Corbeau, all whom are capable of going under 19.0 on a relay start. But, it seems like leaving Kibler off of this relay could cost them half a second, and on the psych sheet, that would drop them from 2nd to 7th, and if that was to hold true for the  actual competition, that could prove to be a pretty big point swing in what’s once again projected to be a very tight team battle against Cal for the meet championship.

Who gets tired doing a 50? Worst case he gets the 8th place points in the 500

I mean, I could be wrong, but I assume ripping a 100% effort 50 free like 20 minutes before a 500 has rarely produced, uhh, ideal results in that second swim.

its like 6 strokes and a couple underwaters. Look at his range he ain’t no drop dead sprinter

For what it’s worth, I don’t think it’s the 50 people are concerned about. It’s the four-minute sprint that comes after it that will be the difficult part.

Do you think Eddie would just do this without knowing something that we don’t?

Having raced the 100 free and Fly in back to back heats, there are absolutely consequences to this approach!

Missy Franklin swam the final of the 200 Free Relay and the A Final of the 500 Free at NCAAs in 2014 and so did Lauren Pitzer in 2019 and both swam well in both races. I’m sure a swimmer of Drew Kibler’s caliber can handle the double well.

I did it once in college. Didn’t really feel like it affected my 500 much to be honest. Completely different energy systems.

In my humble opinion the Longhorns most talented swimmers are Carson Foster and Drew Kibler. Texas might be able to win the national championship with those two combining for only three total relay swims. Unbelievable.

I agree. Followed by Alvin Jiang.