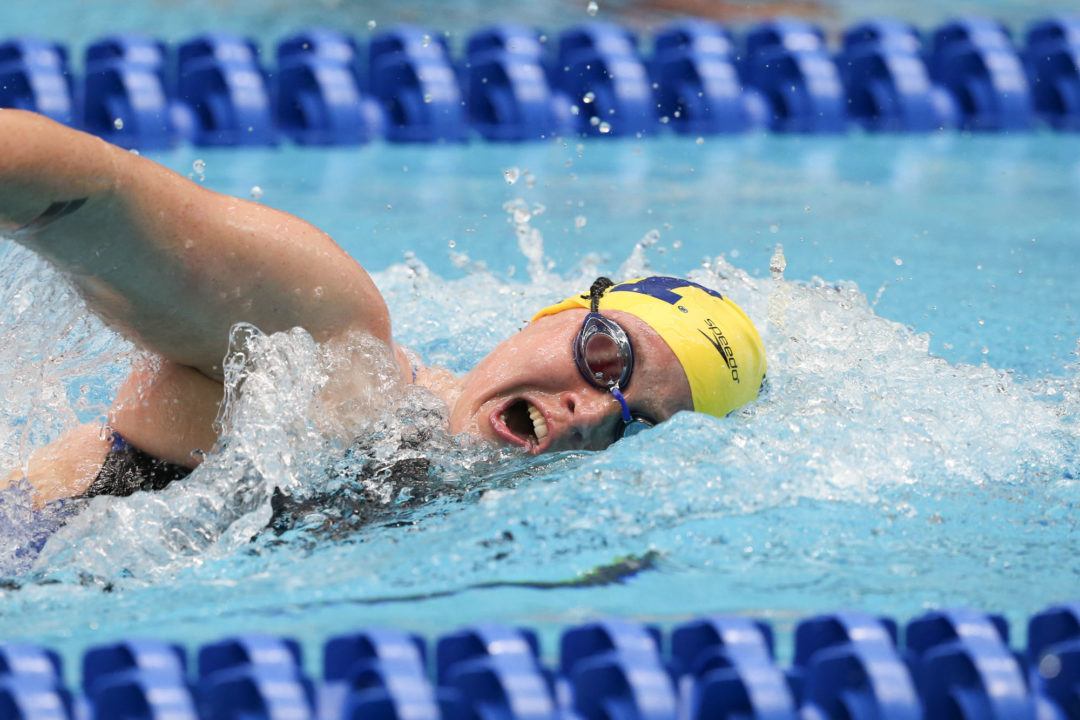 166 athletes, including 19 swimmers (such as Nancy Hogshead-Makar, G Ryan, and Bob Glover) have submitted a letter to the NCAA asking the Board of Governors to reconsider their decision to return championships to North Carolina. Current photo via Tim Binning/TheSwimPictures.com

Earlier this week, 166 acting and former NCAA athletes banded together, asking the NCAA Board of Governors to reconsider allowing championships to be held in North Carolina for the 2017-2018 season. Transgender triathlete Chris Mosier headed up the effort. Athletes who signed the letter include three-time Olympic gold medalist Nancy Hogshead-Makar, Big Ten champion G Ryan, and Big Ten champion Bob Glover.

You can read the full text of the letter here.

The athletes wrote the letter to protest the NCAA decision to hold championships in North Carolina in wake of the state’s repeal of 2016 House Bill 2 (known colloquially as the “bathroom bill”). HB2, among other things, required people in public spaces (including children) to use the bathroom consistent with the sex on their birth certificate and nullified local legal protections for the LBGT community. The NCAA pulled 7 2016-2017 major championships out of North Carolina over the bill, based on the athletic organization’s “commitment to fairness and inclusion.”

When HB2 was repealed last week, it was replaced with HB142, which North Carolina lawmakers called a compromise. After the repeal, the NCAA decided to consider championship bids from North Carolina cities for the 2017-2018 season, saying the new law “has minimally achieved a situation where we believe NCAA championships may be conducted in a nondiscriminatory environment.”

However, critics and LGBT advocates, including those who sent the letter, disagree.

“But HB142, the new law, is not a repeal of HB2,” the athletes write. “It still prevents LGBTQ people, and particularly transgender people, from being safe in North Carolina. It prevents cities, counties and schools from passing protections based on sexual orientation and gender identity, and creates an untenable situation for transgender individuals across the state who are left in limbo without any guidance on how they can avoid criminalization and/or exclusion when using restrooms and locker rooms.”

They continue by contending that the NCAA has an “obligation to protect” its LGBT athletes.

“All athletes, coaches, and fans should have access to the sports they love, and an essential part of that is the ability to exist in public spaces without the fear of harassment, violence, or exclusion,” they write. “Locker rooms and restrooms should be free from discrimination for all people, including LGBTQ people. HB142 denies transgender people equal opportunity to access public and athletic spaces and sends a message that the transgender community is not welcome in North Carolina. And indeed, in condoning – and rewarding – this discriminatory conduct in North Carolina, the NCAA has sent the message to transgender people across the country that they are not safe as more states may act to pass comparable legislation without fear of consequences.”

You can see a list of signees who are swimmers, water polo players, and divers below:

I only recognise G who is somewhat oddly happy to compete in NCAA womens race when she is not a woman . Could not the NCAA add a few non binary events for her . Her chances of winning with Ledecky in the womens field are nil. Branch out G into your own realm .

On the reverse side , does it mean when NCAA holds an event in X state / city that it agrees with every law & regulation ?

You do you Gina

G actually is a biological woman – her birth name is Gillian. She just identifies as non-binary.

And Caitlin Jenner is a biological man but we need to forget that one . Id go non binary too if I was faced with trying to beat Ledecky & demand my own races.

You don’t get it. She isn’t demanding her own races. She swims with the women.

So ? That time is not going to beat Ledecky . There is a danger in going full non binary races in that biological men could enter . However that would make it even more interesting . Just do it NCAA.

This highlights the hiporacy of the NCAA. They use binary gender classifications for sports. Indeed, they would otherwise render women’s only events moot and shred Title 9. However, they then decide to get picky when others recognize chromosomal differences when it benefits their PR efforts and finances (see how these replacement venues are all in less expensive markets?).

Without binary labels, Title IX is meaningless. I’m o.k. with everyone identifying as whatever they want to be, but wouldn’t that lead to the elimination of the concept of discrimination on the basis of gender/sex/gender-identity?

Couldn’t agree more with that hypocrisy. Add to that their deafening silence on the loss of two D1 teams this past week and it shows that their focus is vastly different than what is should be.

Can they still pee in a NC pool?

Yes, and the men and women and transgenders and the rest can all do it in the same lane.

You have more than 166 current and former NCAA athletes supporting you. Stay strong, be you!