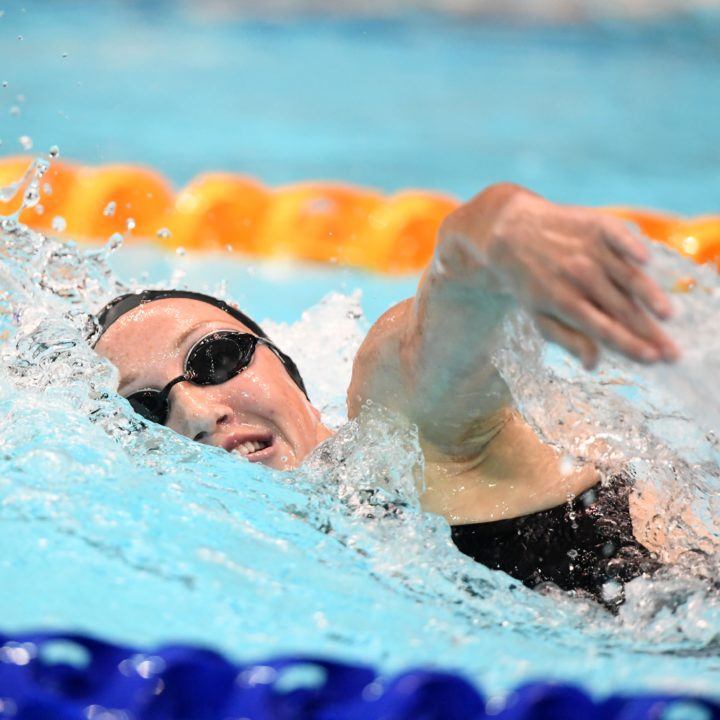 Tonight’s action in Brisbane focused on the age group sector, with the young guns of Australia vying for Queensland titles and bragging rights. There were still some 19&over athletes sprinkled among them, with the women’s 1500m and men’s 800m freestyle events also taking place this evening.

Kicking off the competition was Ryotaro Nishio of Japan, producing a new All Comers Record for 12-year-olds in the 200m butterfly. Taking the age group win in a mark of 2:13.88, Nishio’s time overtook the previous All Comers mark of 2:14.52 held by Shuu Hirano, also from Japan, since 2013. Splits for Nishio tonight included 1:03.50/1:10.38. The next closest competitor in the final was over 6 seconds back.

Newly-minted World Junior Record holder in the 200m freestyle, 18-year-old Bond swimmer Elijah Winnington, took the boys 17-18 100m fly race to add to his gold medal collection from these championships. Splitting 25.69/28.73, Winnington topped the podium in 54.42. That registers as the versatile athlete’s new personal best, overtaking his previous career-fastest mark of 54.92 from April of this year.

Winnington took on a double in Brisbane this evening, also winning the 200m IM for his age group. He logged another personal best at this meet, replacing his previous lifetime fastest of 2:03.95 with a faster 2:03.21 for the gold medal.

Youth Olympic Games champion Kaylee McKeown was also back in the water tonight, winning the girls 17-year-old 200m IM. The USC Spartan swimmer’s personal best rests at the 2:12.52 set at this same meet last year. This time around, however, McKeown was just slightly slower in 2:12.88, still enough to hold the pack at bay and top the podium tonight.

Triple gold medalist at the 2018 Junior Pan Pacs Championships, Lani Pallister, threw down a solid 1:58.79 200m freestyle to take the 16-year-old age category gold. The Cotton Tree swimmer represented the only racer of the night to dip under the 2-minute threshold. Her effort tonight beat the 1:59.00 she scored at the aforementioned meet in Fiji, which gave her the silver medal behind USA’s Claire Tuggle.

Pallister was faster at that Fiji meet, however, leading off Australia’s silver medal-garnering 4x200m free relay with a 1:58.83 lead-off. Ellen Fullerton holds the Queensland and Australia age group record in the 200m free with the 1:57.38 registering in 2009.

For perspective, Pallister’s 1:58.79 winning time from this evening would rank her as the 9th fastest 15-16 year-old performer ever on the United States’ all-time list.

Another rising star within Australia, 15-year-old Thomas Hauck, took down the Queensland All Comers Record in his age group’s 400m IM. He first accomplished the feat in the morning with his top-seeded time of 4:26.73. But he found more energy for the final, stopping the clock at 4:25.57 to slide under the old QLD All Comers mark of 4:28.66 set by Ephraim Hannant way back in 2004.

In fact, Hauck’s time this evening fell just .12 shy of Olympic medalist Mitch Larkin’s overall Australian Age Group Record of 4:25.45 set in 2009. Yesterday teen Hauck broke the Queensland age record in the 100m back with his winning time of 56.78.

Pallister, could be a very good 3rd cog behind McKeon & Titmus come Tokyo for the 4×200.

What if she beats Tirmus at trials kicking her out of individual race. At 16 Tirmus was only 1:59.9

Could well be Titmus and Pallister at Tokyo. McKeon doesn’t have the will to win in the same manner. Mckeon been earning plaudits well above her swims over the years.

I love seeing the upcoming talents in Australian swimming in action.

However I tend not to put too much expectations in their potentials as not everyone can have the proven longevity of a cate Campbell . Two cases in point would be Ellen Fullerton and yolane kukla who showed great potential but didn’t or haven’t really made it big on the senior level.

Kukla won the 50m free at the 2010 Commonwealths as a 14 yr old, and has not been anywhere near that form since.

What has happened to COMMONWOMBAT? Are you the next one in the relay of the grim predictions of the future of Australian swimming?

Lol funny you say that because as soon as we start thinking positive about Australian swimmers then we get reminded how much on a failure they were at Rio Olympics by non Aussie fans and couldn’t keep up with the Americans.. so can’t win either way??

You know how much criticism care xalpbell has been getting just because she said “we put the Americans On notice” at pan pacs .. so which way do you want it yozhuk

I am glad you lol. I’ve never been to Australia and therefore my imagination pictures it as a beautiful place with nice people who cultivated and one of the greatest tradition in the sport of swimming.