14 Storylines for the 2014 FINA Short Course World Championships, plus all the links you need 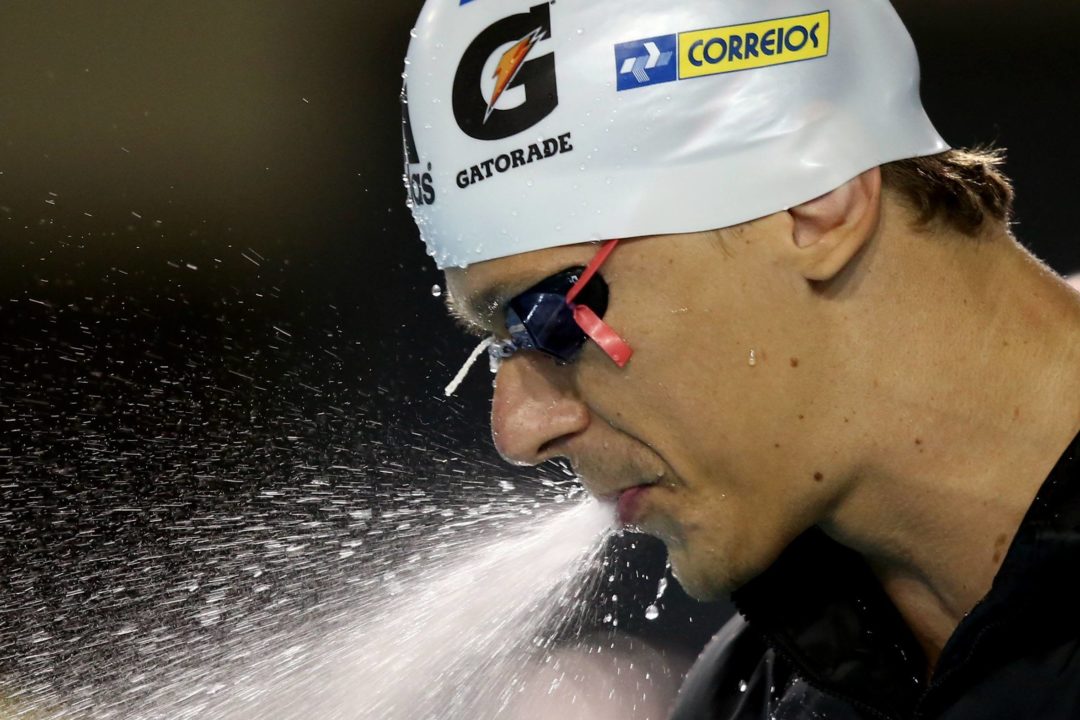 Here’s the order of events. All races below 200 meters are swum with prelims and semifinals on one day and the final on the following night. The schedule below is for each evening session, and finals are in bold:

Start Times around the world

With 2014 winding down, we’re commemorating the year’s World Championships with 14 storylines to watch. The first 7 are more expansive storylines that extend across multiple races, and as a special pre-Christmas bonus, we’ve got 7 mini-storylines – some races that might fly under the radar but still bring with them some unique context.

1. Finally a focus meet for Cesar Cielo: Brazilian sprint star Cesar Cielo notably skipped the Pan Pacific Championships this summer, instead spending time getting used to a new training base. The added bonus was that Cielo got a head-start on short course training, and could be on the warpath for the last world 50 free record he doesn’t own. Cielo is already the fastest in history in the 50 free in long course meters and short course yards. He’ll shoot for Roland Schoeman‘s mark of 20.30 in the short course meters version this week, and will also headline some intimidating-looking Brazilian sprint relays.

2. Women’s sprint butterfly showdowns: Perhaps the splashiest swimmer of long course season was Sweden’s Sarah Sjostrom, who obliterated the 50 fly world record and then won 7 medals at the European Championships. But Sjostrom was notably upset by Denmark’s Jeanette Ottesen in the 100 fly at Euros, and will have to tangle with Ottesen again in both the 50 and 100 meter distances. Also in the hunt will be Dutch star Inge Dekker, who’s been ruling the sprints on the World Cup tour, and has shown she’s very comfortable in short course meters after finishing second in the points for the 7-meet series.

3. Can Ryan Lochte keep the streak alive? American Ryan Lochte has won a gold medal at the past 5 Short Course World Championship meets, and has a shot to make it 6 in a row this week. He’s entered in the 200 free, 100 fly, 50 fly, 200 IM, 100 IM and 200 back, but he’s going to have to battle to take home gold in any of those races. Lochte missed much of the past year dealing with a knee injury, but wound up putting together a nice finish to the summer at U.S. Nationals and Pan Pacs. Lochte won 6 golds in 2012 and won both the 100 and 200 IMs, but to win IM gold in 2014, he’ll have to overcome…

4. Kosuke Hagino: Japan’s do-everything superstar: The consensus king of last summer’s Asian Games, Kosuke Hagino has become Japan’s answer to versatile American swimmers like Lochte and Michael Phelps. Hagino is arguably the world’s best IMer, but also upset Park Tae-hwan and Sun Yang in the 200 free at the Asian Games and swims a mean 200 back as well. In Doha, Hagino will tackle all three IM distances while adding yet another diverse event to his repertoire – the 100 fly.

5. The Iron Lady gets another test of mettle: Hungary’s Katinka Hosszu is world-famous for her brutal event lineups, entering practically any race she has a shot to medal in and then some. The Iron Lady will swim 10 different events in Doha, with up to 29 total swims between prelims, semifinals and finals. The big question: will that heavy event load prevent her from winning as many gold medals as she’s capable of? Hosszu has been wildly successful in short course meters, earning over $300,000 on the World Cup series and winning the title in a landslide. But she’ll swim the 100, 200, and 400 IMs, 50, 100 and 200 backs, 200, 400 and 800 frees and the 100 fly. She won gold in the 100 IM and 200 fly in 2012. She’ll certainly have the opportunities to better that total, but the question is if she’ll have the energy.

6. Danish women to send off coach Shannon Rollason: Denmark has become a swimming power on the women’s side, with perhaps the world’s scariest medley relay and four legitimate gold medal contenders. Mie Nielsen, Rikke Moller Pedersen, Ottesen and Pernille Blume won gold in the 4×100 medley relay in 2012 and have only gotten better, plus distance star Lotte Friis would probably be the headline-grabbing endurance swimmer in any generation that doesn’t feature Katie Ledecky. This year, it’s personal for the Danish gals, though, as Doha will be the final meet with beloved coach Shannon Rollason. Rollason announced he’d be leaving his job at Denmark’s National Training Center at the end of 2014 to return to Australia, his native nation. Look for his swimmers (including Moller Pedersen, Ottesen and Blume) to send him off on a high note.

7. Will Adam Peaty continue to ascend to the elite tier of breaststrokers? Great Britain saw an absolute explosion this long course season from Adam Peaty, who shattered the 50 breaststroke world record and won golds at both Euros and the Commonwealth Games. Peaty hasn’t had that kind of success in short course as of yet, but if you’re going to keep an eye on one male swimmer for a set of breakout performances, you probably want to make it Peaty. He’ll compete against world record-holder Cameron van der Burgh of South African in both the 50 and 100 breasts.

1. Gyurta chases 2:00 barrier: In the longer breaststroke race, the favorite is Hungary’s Daniel Gyurta, who broke the world record earlier this year at a World Cup meet. Gyurta is within a half second of the first sub-two-minute SCM 200 breast in history, and should have a great shot to break the barrier this week.

2. Darian Townsend dons red, white and blue: Former South African Olympian Darian Townsend will swim his first official international meet in a Team USA swim cap in Doha. He’s only slated to swim on the 4×100 free relay, and will get his first individual action next summer, but Townsend competing against his former country at Worlds is definitely an intriguing narrative.

3. Momentum for Elizabeth Beisel? Another American-centric storyline revolves around Olympian and new pro Elizabeth Beisel, who wrapped up her NCAA career last spring. Beisel was dominant at the Minneapolis Grand Prix in short course yards last weekend, and will look to keep her professional career rolling with a strong showing in Doha. Beisel also continues to venture into the distance free races – she’ll swim the 400 and 800 free, plus the 400 IM and 200 back.

4. Chad le Clos chasing 100 fly record: The impending showdown with Michael Phelps waits till next summer (Phelps has never been much for swimming short course anyways), but Chad le Clos still has a big motivational carrot this weekend. He’s been just off the 100 fly world record all of the World Cup series and could take the super-suited 48.48 off the books if he can drop less than a tenth off his season-best.

5. Can Tom Shields rise to the challenge? Also in the butterfly races is Tom Shields, an American short course specialist who had his long course breakout last summer. Shields has been priming his short course meters speed with multiple appearances on the World Cup circuit, and took third overall while challenging Le Clos on a number of occasions.

6. A glimpse into the future for American swimming: The American women feature a quartet of high school-age swimmers who could very well be a big part of the nation’s swimming future. Abbey Weitzeil, Katherine Drabot, Amy Bilquist and Kathleen Baker will all compete in Doha, and it’ll be worth keeping an eye on how they respond to the pressure. Weitzeil, Baker and Bilquist will swim together at Cal next year, while Drabot is currently a high school junior.

7. How will teams approach the mixed relays? Mixed gender relays (with two men and two women) are still very new to the sport at the international level, but will be a part of the Doha lineup with the 4×50 free and 4×50 medley events. FINA added mixed relays to the World Cup, but didn’t get a great turnout, though much of that can be attributed to the absence of prize money and points for relay events. With legitimate gold medals up for grabs in mixed relays this week, it’ll be interesting to see if countries put forward their best lineups, or allow their top swimmers to rest for individuals, using mixed relays as extra swims for younger swimmers or those with lighter lineups.

Great article! I am starting to get excited! Lochte vs Hagino, Sjostrom vs Ottessen, Leclos vs world record, Peaty vs Van Der Burgh, Cielo vs Manaudou….

Why does Lochte’s schedule include that many events, for crying out loud? Focus on 3 – be rested, prepared, give yourself a chance to WIN, not just make finals.

Yeah, because doing it his way just hasn’t resulted in much of a swimming career.

MIKE , u haven’t yet obviously followed Lochte’s career on worlld short course championships so far . 6 medals in 2010 , 8 in 2012 . Not bad at all for a guy who does too much heh ? Come on , he was even the anchor on that Medley relay to conclude Istambul last relay . He saved the Us in 2010 on that same medley relay by swimming a huge butterfly leg ….. always complaining , never loooking between lines with Lochte ? He will do just fine , after a knee injury fully recovered ; he will be a key to how Usa is going to compete this week . Count on that . Go Lochte !!!

I think you replied to the wrong person. I thought Mike’s sarcasm was pretty easy to detect.

Yea you missed the sarcasm, but it was actually 7 medals in 2010 if I’m not mistaken.

It, by no means, has been a full year of training for Lochte with the injury, but we will see soon if he is in top form! I hope the more sprint-focused training leads to another drop in the 100IM record!

Lochte never swims just to make finals… He’s always going for the win. If he’s in good form look for him to challenge Le Clos and Shields in the Flys and put a beating on some people in IMs and 2 back. 2 Free should be interesting though, that is one stacked field.

Too bad Agnel is out of the tournament. He would have been the clear favorite for gold, but I think Lochte and Frasier-Holmes are the front-runners now.

Sorry but I’m not even sure if Agnel would have qualified in final.
Anyway he would have never won the gold this week.
He’s so far from his best level.

Yea, I understand that’s why he decided to sit this one out, but still, he has shown to perform well when the pressure is on even when not in top form.

But in his top form it would be no-contest.