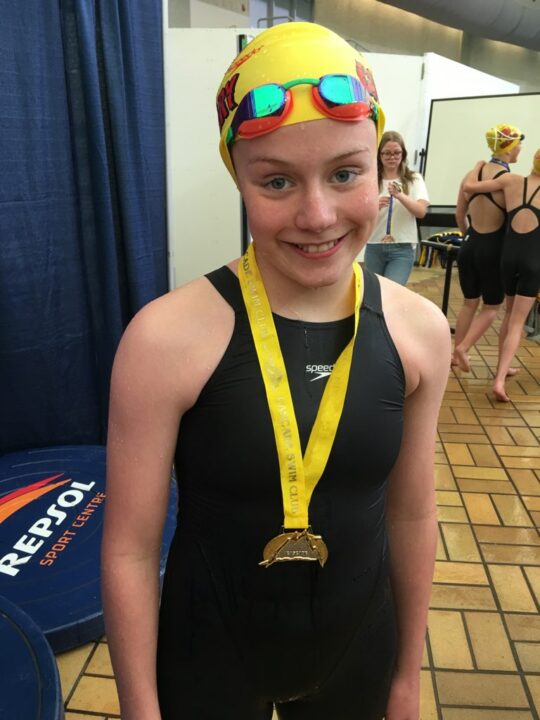 Maxine Clarke looks to be one of Canada's newest up-and-coming age group swimmers, having hit a 57.66 SCM and a 59.05 LCM 100 freestyle. Archive photo via Kerstin Clark

13-year-old swimmer Maxine Clarke has been making waves in Alberta, Canada, and could be emerging as one of the country’s next age group stars.

Over the weekend, Clarke delivered a pair of 100 freestyles in both short course and long course, hitting a 57.66 SCM and a 59.05 LCM. Those swims, while still a little bit off of the respective Albertan provincial age-group records, make her a swimmer to watch in the coming years.

Olympic silver medalist, Rebecca Smith holds both of the 13-14 age group records for the province at a 55.32 in the short course and a 56.61 in the long course, both of which she set in the 2014-2015 season. Smith went on to become one of Canada’s top freestyle sprinters and recently won her first-ever Olympic medal in the women’s 4×100 freestyle at Tokyo 2020.

Clarke only turned 13 in the summer of 2021 which means that she has roughly 2 years to shave 2.34 seconds off Smith’s short course mark and 2.44 seconds in the long course. While Clarke is not currently a Canadian citizen, her father is a professor at the University of Calgary and Maxine has plans to become a naturalized citizen of Canada by 2022.

Should she continue on her trajectory, Maxine Clarke could certainly wind up being a part of the next generation of Canadian sprinters. Canada has been on the rise internationally over the past Olympic quad, kickstarted by Penny Oleksiak‘s 100 freestyle co-victory at the 2016 Rio Olympics. Since then, Oleksiak, Taylor Ruck, Kylie Masse, Maggie MacNeil, Sydney Pickrem, and many more have amassed numerous major international medals and continue to assert Canada’s place in the international swimming conversation.

A new name that has emerged this season in Canadian swimming is Summer McIntosh who recently qualified for the Tokyo Olympics in the 200, 400, and 800 freestyle at the ripe age of 14. She debuted at Tokyo with a 4th place finish and a new Canadian record of 4:02.42 and followed that up with a new 200 freestyle PB of 1:56.11 during prelims. 14-year-old McIntosh is roughly 2 years older than Clarke and the 2 could very well end up seeing each other on the national team in years to come.

Also swimming in Calgary over the weekend was former University of British Columbia backstroker Ingrid Wilm. Wilm posted a solid time in the women’s 100 short course backstroke, hitting a 58.34 to win the event. That’s a PB for Wilm, improving upon her swim for the 2018 World Short Course Swimming Championships where she swam a 58.55 on the lead off of the women’s 4×100 medley relay.

Wilm recently came close to qualifying for her first-ever Olympic squad at the 2021 Canadian Trials. There, Wilm actually swam under the FINA A qualifying standard of 1:00.25 in the 100 backstroke with a 1:00.19. She finished in 3rd place, however to Kylie Masse (57.70) and Taylor Ruck (59.60), meaning that she was left off the team.

do you swimwam guys notice how thumbnails on front page articles take the center of the image and often cut out heads?