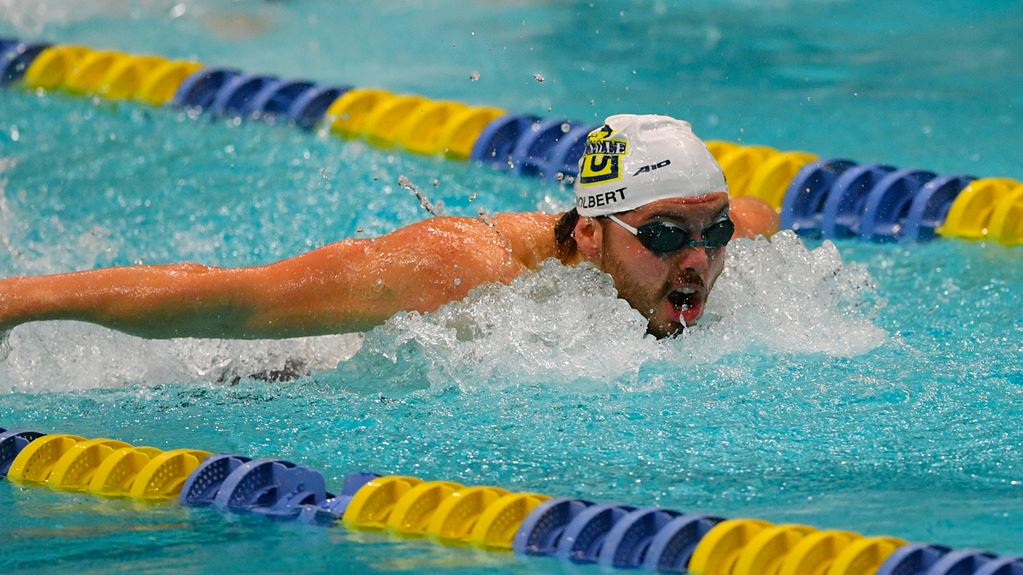 Zack Wolbert's Pool Record in the 200 fly was one of 3 pool records set on Saturday in a dual between La Salle and Loyola. Archive photo via Greg Carroccio/Sideline Photos

Three Pool Records went down at this weekend’s dual meet between Division I programs La Salle University and Loyola University, as the two teams split the results of their dual meet.

The record board at La Salle’s Kirk Pool is home to a number of big names, owed mostly to the glory days of prep school swimming in the late 1980s and early 1990s.

One fewer of those legendary names is left on the board after Saturday’s dual meet, however. Olympic gold medalist Mel Stewart, co-founder of SwimSwam.com, previously held the 200 fly record in 1:47.74, but junior Zack Wolbert wiped the last vestige of his name from the board by swimming a 1:47.73 – just .01 seconds faster.

Stewart set his record in 1987 while swimming for nearby Mercersburg Academy before matriculating to the University of Tennessee. He would eventually break the World Record in the 200 fly.

Stewart’s other previous Pool Record, in the 100 fly, was broken by Brendan Burns in 2019.

On the women’s side, a pair of Pool Records, albeit newer records, were also broken by La Salle’s Sara Rizzetto. In the 200 back, she won by more than 3 seconds in 2:00.08, which blew away the old record of 2:01.90 that was set by Episcopal Academy’s Emma Sieberlich in 2014.

In total, La Salle now holds 7 of its own Pool Records in men’s and women’s swimming.

Loyola was without one of its star swimmers, freshman Lily Mead, for the meet. She broke the school record in the 200 IM in late February, but in spite of her absence, Loyola still managed to hand La Salle its first loss of the season.

With winners of three of the four 100 yard events at the meet, it’s no surprise that Loyola was able to dominate the 200 medley relay in 1:47.09.

Among the highlights for the Loyola men was a sweep of the backstroke races by Mark Boran, winning a tight race in the 100 in 51.11, and a more comfortable race inthe 200 back in 1:48.90.

PHILADELPHIA – Men’s swimming & diving defeated Loyola (Md.) 156-138 on Saturday for its sixth straight victory over the Greyhounds. Junior Zachary Wolbert led the way with three wins, breaking a pool record in the 200 Fly.

PHILADELPHIA – Women’s swimming & diving endured its first defeat of the 2021 season, falling to Loyola (Md.) 165-130. The afternoon was highlighted by the display put on by junior Sara Rizzetto, who broke pool records in the 200 Back and 400 IM, while also adding a victory in the 200 Free.

PHILADELPHIA – The Loyola University Maryland men’s and women’s swimming and diving teams finished Saturday with split results at La Salle University as the women’s side posted a 165-130 win over the Explorers, but the men fell, 156-138.

Abby Andrews, Megan Dickey, Elizabeth Walsh, Colin Anderson and Mark Boran all won two events for the Greyhounds as the women came up with nine victories and the men had six.

Both 200 medley relay teams opened the meet with victories as Faith Tyranski, Andrews, Walsh and Dickey finished first on the women’s side in 1:47.09. Conor Rutigliano, David Sears, Jimmy Haubury and Reid Hussey were victorious in the men’s race with a time of 1:32.49.

The men’s 100 backstroke brought Boran his first win of the day as he claimed the top spot in 51.11, and Jonathan Brooks was third in 51.36.

Andrews scored her second victory of the afternoon in the women’s 200 breaststroke, leading three Greyhounds in the top three in 2:24.47. Wade and Caroline Arpin were second and third in 2:25.09 and 2:30.95.

Walsh finished her day with a first-place race in the 100 butterfly (57.57). Wade, Davis and Andrews culminated the women’s individual races with second through fourth place finishes in the 400 individual medley.

We bout to see a comeback using USRPT to take it back?

34 years is timeless! They probably had coke bottles for lane lines, wooden blocks and they hadn’t yet invented goggles then.

gone a few years back

This past fall LaSalle had announced that they were eliminating several Sports – One of which was the Men’s Swim team. Has that decision been reconsidered? Will there still be a LaSalle men’s swim team next year?

He would be at least a second faster without the beard 🙂

8
0
Reply
Another Tomek
Reply to  Tomek

What’s up my guy

Did Mel swim beyond 15 on start/turns when he set the old record?

Which is worse for Mel: Losing the record by :00.01 or having the byline say it was 34 years ago. All in good fun, that just shows some events have held the test of time. Google the National High school boys 500 free records and see how many top 20 times are from many, many years ago

2-fly is one of those events where competition is LOW and SMALL (while you’re racing and into the future). I remember going to Nationals a few times and there were only 4 heats of the 2-fly. There were 20+ heats of 100 free. So, if you want to follow the path of least resistance, swim 2-fly, 400IM, 500 free. Your life will suck, certainly be an exercise in dealing with pain, but you’ll acclimate after a few years.

Mel, I’d argue that being a flyer now is much easier than it was back in your day. Back then you guys did fricking 200s on repeats. Today we just swim Race Pace 50s and 100s for the most part.

I have an even better course….I have 2 records still left. One from 1977 summer league SCM a relay in an age group that was cancelled in a league that lasted 50 years but finally closed. The other from 1972 a pool and team record in a 20 yard pool that has long been bulldozed. Nothing like “legacy” records lol

I’d love to hear from Mel or anyone with experience in the matter. You have an Olympic gold, so who cares is someone breaks a 34 year old pool record! But does having an Olympic Gold put everything else on summer league record level? If you have an Olympic you achieved the 10.0 score and climbed the mountain top. So NCAA title, conference title, pool record, summer league record, those were just just part of the journey to the top. It was just a journey, you got to the destination, and looking back all the stops along the way just fade together. Or is that just me hoping my summer league records are as important as the NCAA titles I… Read more »